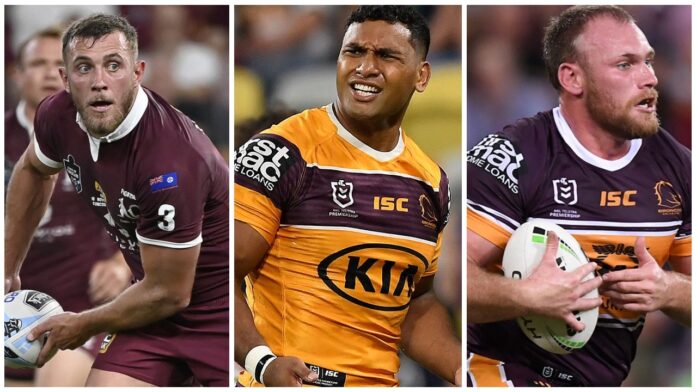 Another huge week in rugby league as we head into the final third of the 2021 NRL season, and player movements and rumours are heating up as for some, the focus starts to shift beyond this season.

The Brisbane Broncos are set to fight for the services of Payne Haas, as multiple Sydney based clubs are reportedly honing in on the star prop.

If Haas is to leave Red Hill, he’ll be added to a huge list of long term prospects who have slipped through the fingers of the Broncos.

FULL STORY: Broncos to fight for Haas as rivals loom

Bulldogs and Dragons in race for Pangai Jnr

The St George Illawarra Dragons and Canterbury Bulldogs have emerged as the front runner in the pursuit of Bronco Tevita Pangai Jnr following Wests Tigers‘ going “cold” on him.

The Australian’s Brent Read and Courier Mail’s Travis Meyn and Peter Badel have all reported that St George Illawarra coach Anthony Griffin is keen on Pangai Jnr after he was told by the Broncos that he was free to leave last month.

Hodgson to stay in Canberra?

The Brisbane Broncos are no longer pursuing Raiders former captain Josh Hodgson, as the club’s roster gets a multimillion-dollar overhaul.

The Broncos have had their eye on Hodgson since the beginning of the season, but it now looks like the English hooker will stay with Canberra.

CONFIRMED: Warriors finally get their man

The Mount Smart franchise have finally got their man! 🔴⚪🟢🔵 #NRLhttps://t.co/h2qauE8dgz

The New Zealand franchise announced that Lodge would join the club at their base in Terrigal this week before the club’s clash with the Dragons on Friday night.

In an official statement from the Red Hill franchise released on Thursday morning, it was announced that Capewell, 27, has inked a three-year deal that will see him remain in gold and maroon until the cessation of the 2024 season.

According to a report from Dan Walsh on NRL.com, the Cowboys are keen on signing the Storm lock.

However, there are other clubs circling for Finucane, who has played four games for the Blues and was in the extended squad for Game 2 of this year’s series.

Courier Mail journalist Peter Badel claims a formal offer from the Wests Tigers will be received in the coming days. On top of that, the Canterbury Bulldogs are also interested in the star back-rower.

“The issue with Pangai Jnr is not over yet. He’s about to get a formal offer from the Wests Tigers. It will be a two-and-a-half-year deal at this stage. So this season and then another two years to the end of 2023. And also the Bulldogs are circling for Tevita Pangai Jnr,” Badel said on Fox Sports' NRL 360.

Newcastle are understood to be in discussions with Origin duo Dale Finucane and Dane Gagai, with the star pair still off-contract this season.

The Knights have been linked to Gagai in recent weeks, with a potential reunion between the two parties now building momentum.

Finucane has been closely linked with a number of NSW clubs for 2022, with the Blues forward yet to make a call on his future in Melbourne.

Wishart to Melbourne in mid-season switch

The Storm have secured the services of Dragons utility Tyran Wishart on a mid-season development deal.

The son of Illawarra Steelers great Rod, Wishart departs the Dragons after inking a two-and-a-half year deal with the Storm.

Melbourne have reportedly secured their second signing in a week. #NRLhttps://t.co/dwDbNKNevz

The highly-touted teenager is understood to be a viable asset across a number of playmaking roles, having been utilised at both rake and five-eighth.

Cotric: Sezer "would love to put that Doggies jersey on"

The Bulldogs made a play for Johnson before the Kiwi international decided to return to the Warriors in 2022, and Cotric has raised the prospect of his good friend, Sezer, returning to the NRL after two years at Super League side Huddersfield.

Sezer had previously played 105 games for Gold Coast and Canberra - including the 2019 NRL Grand Final - before moving to England in 2020.

According to The Daily Telegraph, the Titans have tabled a three-year deal for 30-year-old Isaac Liu, who comes out of contract at the end of the season.

Liu has played 191 first-grade games since making his debut for the Roosters in 2013, and has won two premierships while becoming one of their most consistent players.

Jaydn Su'A being chased by Dragons

The Dragons are rumoured to have tabled Jaydn Su'A a three-year deal.

The off-contract South Sydney back rower, who also played for Queensland in Game 1 of the Origin series this year, has recently fallen into reserve grade at Redfern.

The signing would continue the Dragons approach of signing ex-Broncos players as they look to bolster their forward pack for 2022 and beyond.