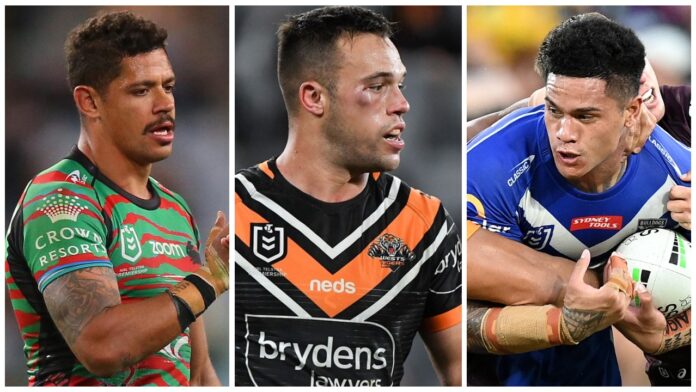 It has been another hectic week of NRL transfer news and rumours, with the market talk heading into a frenzy once again ahead of the August 1 deadline.

The Panthers, Broncos and Storm are in the thick of it all once again as sides start preparing list management calls for 2022.

Penrith have announced the signing of released Broncos second-rower Tevita Pangai Junior for the rest of the season.

After cutting ties with Brisbane and signing for Canterbury from next year, the 25-year-old will embark on a premiership push with the Panthers in 2021.

The Dragons confirmed the news on Tuesday, with the 23-year-old set to depart the Rabbitohs after only three seasons at Redfern.

Journeyman eyeing for an NRL return

Samoan international James Gavet could be the latest ex-NRL player to make his return to Australia after competing in the Super League.

Gavet is set for an immediate release from his contract with the Huddersfield Giants due to personal reasons, opening up an opportunity for the 31-year-old to join a contending NRL side before August 1.

Former St George Illawarra Dragons forward Paul Vaughan is reportedly nearing a deal with the Canterbury Bulldogs, with the one of the key determinants in getting it done being a severe pay-cut.

Vaughan, who was released by the Dragons on Tuesday 6 July following a party held at the players home in which attendees were in violation of NSW Public Health Orders, will look to find a new home under the newly minted Phil Gould-led Bulldogs.

The Brisbane Broncos have picked up their first piece to the puzzle of replacing Tevita Pangai Junior, with Corey Jensen set to leave the North Queensland Cowboys.

As reported by Pete Badel on The Courier Mail, Jensen will join the club on a two-year contract from the beginning of 2022. They have also gone on a re-signing rampage, with new contracts locked in for nine players in the past few months.

Newcastle forward reportedly has change of clubs in sight

Former New South Wales Origin prop David Klemmer is reportedly growing unhappy in Newcastle and may be looking for a change of scenery at the end of the year.

The Knights' veteran of 170 first grade games, as well as 14 Origin games for the Blues and 19 Tests for the Kangaroos, has seemingly fallen out of favour in coach Adam O'Brien's set-up.

England beckoning for out of sorts Gold Coast half

Out of sorts Gold Coast half Ashley Taylor appears destined to leave the NRL at the end of the season, with all clubs yet to make a play for the 26-year-old.

In what may go down as one of the worst-value contracts of the modern NRL era, Taylor was signed as a million-dollar man by the Titans, but has failed to guide the club to a single finals appearance since his first season on the Coast in 2016.

In big news for Parramatta fans, coach Brad Arthur has put a pin in rumours that the club would be making a play for out-of-favour Bronco Anthony Milford.

Milford, who has become somewhat of an outcast at Red Hill in recent times, was said to be the subject of interest from a host of clubs including the Eels as he looks to depart Brisbane.

With the Sharks notifying prop Aaron Woods that he wouldn't be offered a contract at Endeavour Field past the 2021 season, the 30-year-old is on the hunt for a new jersey to wear in 2022.

According to The Daily Telegraph's Phil Rothfield, a move from Shark Park might come sooner than expected, with teams looking at picking up the veteran before this season's finals series.

Wests halfback Luke Brooks up for grabs, per report

Wests halfback Luke Brooks is reportedly up for grabs for rival clubs, as the Tigers look to cement their first-string halves partnership for 2022.

As reported by The Sydney Morning Herald, the Tigers are understood to have touched base with a number of clubs in regards to shopping Brooks' services for next season.

In an effort to replace the departing Tevita Pangai Junior, Brisbane have reportedly begun scouting 'cut priced' options to fill the vacant slots that currently require filling in the middle of the park.

Dunamis Lui and Aaron Woods could be brought north of the border. Ryan James' name was also raised as one of interest by Ben Ikin, via NRL.com.

Wests in the race for Finucane as Knights pull out

The Wests Tigers are the latest club to put forward a three-year deal to off-contract Storm veteran Dale Finucane.

As reported by The Daily Telegraph, the Tigers' bid is a late attempt to swoop on the 29-year-old lock, who is also gaining attention from the Dragons, Cowboys, Sharks and Titans.

The off-contract 31-year-old has been heavily linked with rugby union over the past couple of months, with it thought Parramatta wouldn't offer him a new deal to stay at the club.

While Bennett will depart the Redfern club at season's end in handing the coaching reigns over to Jason Demetriou, the supercoach believes there is a place at the burrow for Milford following the imminent departure of Dane Gagai.

Sharks gearing up to chase Tiger half

It may come as a surprise to Sharks' fans, but it's understood the club are looking at throwing an offer the way of Luke Brooks.

The out of sorts Tigers half, who has never been able to inspire the clubs to the heights his potential suggested when he burst onto the scene, is on contract at the Tigers until 2023.

But that hasn't stopped the Sharks from sniffing around, according to a Fox Sports report.

Craig Bellamy has admitted the Storm are looking at an early arrival for Xavier Coates ahead of the August trade deadline.

The Papua New Guinea-born flier has been demoted from Kevin Walters' side for this coming weekend's game against the Penrith Panthers, despite representing Queensland in the State of Origin series just weeks ago.

Mitchell Pearce might have a year to run on his contract with the Newcastle Knights, but speculation is abound that he could be on the way to Belmore.

Trent Barrett still has cash to burn at the currently last-placed Bulldogs as the club look to turn around a horror long-term run of results on the back of their salary cap mess.

Dane Gagai has been the topic of plenty of contract speculation in the last month, but he has reportedly agreed to link with the Newcastle Knights today.

Michael Carayannis on The Daily Telegraph is reporting the contract will be a three-year deal, which is what the star centre was chasing.

It's understood the Eels were also in the mix for Gagai, while the Broncos had been weighing up an offer.

Dragons reportedly lay law down to Tigers over Mbye

The St George Illawarra Dragons are reportedly on the hunt for Wests Tigers' utility Moses Mbye, but they have now made their position extremely clear.

He is either going to be in a Red V jumper by the transfer deadline at the start of August, or he never will be.

The utility has been linked to the Dragons for a mid-season switch, however, the Dragons aren't interested in waiting around.

According to The Daily Telegraph's David Riccio, the Chooks are nearing a two-year deal with the 26-year-old.

Former Raider Aidan Sezer has signed a two-year deal with the Leeds Rhinos in the English Super League, putting to bed rumours of an NRL return.

Sezer will depart current club Huddersfield at the end of the 2021 season to join the Rhinos in a big move for the halfback.