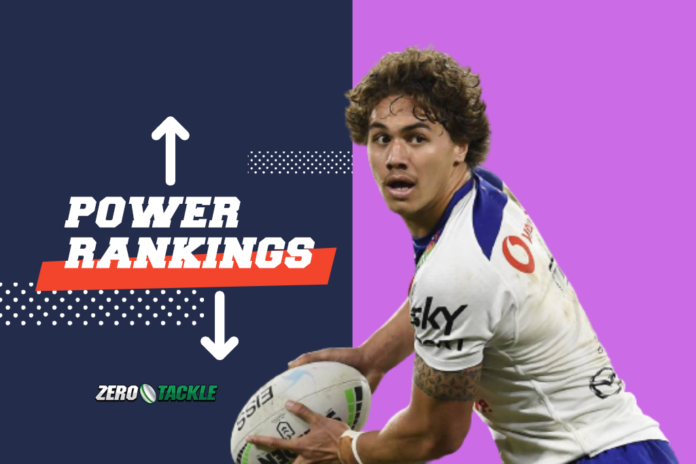 Round 22 saw the destination of the wooden spoon all but officially decided and we look to have crowned Minor Premiers. Where did your team land on our all important Power Rankings after a historic round of Rugby League?:

Two points clear. Three games to go. Far superior point's differential over the leading pack. The Minor Premiership is all but decided.

The Storm faced a very tricky task on Thursday night in a desperate Raiders outfit but did away with said challenge with relative ease.

Injuries to Finucane and Hughes are a worry but otherwise this was a wonderful night for the Storm. This side are absolutely humming in their title defence.

I don't care what the NRL ladder says, the Bunnies are the second best team in the comp right now. Cody Walker is on his way to the Dally M Medal after yet another monster game.

Walker was far from alone in the "good game" steaks. Latrell Mitchell is destroying all before him. Tevita Tatola was unstoppable from the bench. Braidon Burns and Josh Mansour both scored doubles.

The Bunnies can all but secure a home final with a win over the Panthers this weekend in what is shaping up as the game of the season. Phwoar!

Nathan Cleary's back and he hit the ground running. Exactly what the Panthers and their fans wanted and needed to see. They're back in the title hunt.

Brent Naden and Dylan Edwards both crossed for doubles but this was the Matt Burton show. It doesn't matter where he is on the field, he's a genuine megastar.

They have a monster game against the Bunnies this weekend that could very well decide second spot. The loser is out of the Minor Premiership run also.

Well, if the Sea Eagles weren't a serious title threat heading into Round 22, they certainly are now. The 56-10 win over old enemies the Eels was as entertaining as it was dominant.

Trbojevic was, again, in EVERYTHING. He, Saab and Garrick are the most dangerous back three in the competition right now. Moses Suli slotted in due to a HIA sub to score a double.

Manly look to have dodged the most unwanted of bullets. Tommy Turbo looked as though he may be out for the rest of the season but has been named this weekend.

The ten try flogging sets up Manly for a crack at fourth spot. The Raiders, Dogs and Cowboys are all very winnable games. They need the Roosters to slip up but I'm confident they'll do their part.

The great escape! Wow the Roosters were oh so lucky to escape Brisbane with the two competition points. A literal last minute penalty goal secured an unlikely victory.

James Tedesco's effort levels on Friday night were an 11. He tried his backside off in every sense. He is going to put this side on his back and carry it into the finals.

With the Dragons, Bunnies and Raiders stand between the Roosters and a top four finish. If they can achieve a top four finish despite their season, this would go down as an all time effort.

Yikes. Yuk! YIKES! The Eels fall from grace has been frightening. They were so awful on Saturday evening. Manly were good but Parra were BAD!

With everything to play for; mainly pride against a bitter rival, the Eels conceded ten tries, and lost their heads.

I don't even need to look at the Eels final three games, they're not finishing top four as they set themselves up for.

Newcastle are not in first class seats on their trip toward a second straight finals appearance. This is due to their win over the Sharks on Sunday afternoon.

Ponga's final 15 minutes was enough to see them home over desperate opposition. Enari Tuala and Mitchell Barnett turned into world beaters across 80 unforgettable minutes for both.

With the Bulldogs, Titans and Broncos in their remaining fixtures, Newcastle have set themselves up for a relative easy ride into the finals.

I was really, really hoping that the Titans were the real deal. An embarrassingly soft loss to the Rabbitohs proved that they are not.

David Fifita, the club's multi-million dollar superstar has been reduced to a bench option who barely made any impact at all. Corey Thompson's 55th minute try was all she wrote for the Gold Coast.

They play the Storm this Thursday before games against Newcastle and the Warriors. They won't beat the Storm but they need to minimise the damage.

Oh those Warriors! Everyone's second favourite side just keeps on keeping on. The 24-10 win over the Dogs puts them right back in the race.

Josh Curran's past fortnight has been incredible. Reece Walsh just continues his incredible growth as an NRL footballer. AFB continues to be a beast in the middle.

The Broncos, Raiders and Titans remain. If they win all three, and only all three, they're a red hot crack at this.

Canberra are still very much in the race for the top eight thanks to those sides around them not being able to take advantage of the Raiders loss to the Storm.

Bailey Simonsson's hat-trick kept the Raiders within striking distance of the Storm but truthfully they lacked the talent to overcome ill discipline.

Conceding four penalties, and penalty goals, with their top eight hopes on the line just isn't good enough. They've got it in them.

The Sharks season ended on Sunday afternoon due to yet another uninspiring, limp performance despite their season being on the line.

They lack the leadership and discipline to trouble any side worth a salt. Billy Magoulias hitting Ponga on suspicion costing them an easy two points sums it up. His one run for one metre more than made up for it though.

Josh Hannay has been a hinderance to this side making the finals and as good as Kennedy, Williams and Ramien have been, they're not able to overcome.

The Tigers kept their slim finals chances alive with a classy win over the Cowboys. Ken Maumalo has become a monster again since joining the club. He was big in the 24-16 win.

I maintain that Adam Doueihi is having one of the all time 'under the radar' seasons. If he's playing for a top eight side he's in the media much more often.

The Tigers MUST beat the Sharks this weekend or their season ends. With it all on the line against a side they should beat ... where have we seen this before?

A fifth straight loss continues the Dragons run to nowhere. They were in this game for all of 20 minutes before the Panthers ran over the top of them.

I have no idea why Jack Bird, a weapon at centre or in the back row, has moved to fullback at the expense of two genuine fullbacks.

With the Roosters, Cowboys and Bunnies left, the Red V won't be playing finals footy this year. It's all about 2022 now.

You can't help but feel a little sorry for the ole Broncs. They looked home against the Roosters, capping off a wonderful underdog win. It was not to be.

Payne Haas is the elite big man in the competition right now and no one can convince me otherwise. Albert Kelly and Tyson Gamble are having the most unlikely of seasons.

I caught myself cheering on the Broncos late in this game, never thought I'd type those words. They've all but officially avoided the wooden spoon.

The Cowboys just want the end of the season. That's the way they're playing anyways. They looked all at sea against opponents there to be beaten.

Valentine Holmes should really consider a move back to the wing. Drinkwater's stats are incredible but his form is not up to the stat sheet.

I don't even want to bother looking at the run home. They'll be lucky to win a game.

Ahh those Doggies. They should have been right in this up-to their eyeballs. They weren't. They had their moments but they just aren't there.

Aaron Schoupp is a fair player. He crossed for an early try and ran for 252 metres.

The Dogs look to have signed David Klemmer. This would cap off a MONSTER recruitment drive. 2022 cannot come quickly enough.