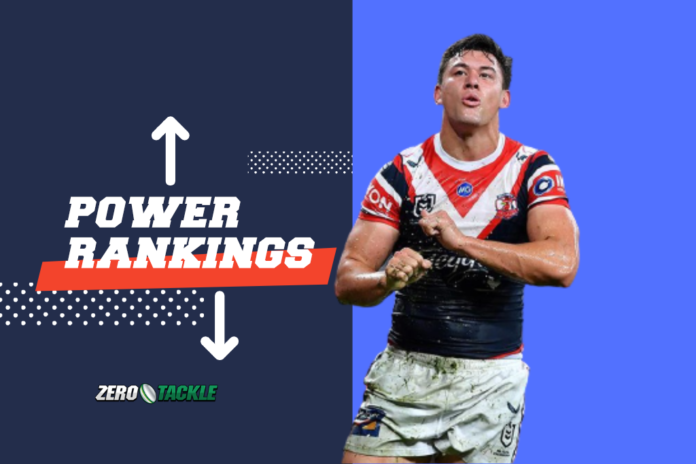 The Storm are sitting pretty at the top of the table and will be well rested after the bye. Ryan Papenhuyzen reportedly isn't too far off either, while Harry Grant is due back soon.

In their run in there looks to be only two danger games; a clash with the Panthers, and a final round contest with the Sharks where they'll likely rest players.

Unless there's a drastic drop off in form I can't see a way where Melbourne don't finish in the top two from here.

Penrith haven't escaped the Origin period unscathed in that they lost both their starting halves for a month. That said, the depth in this squad is incredible and they won't suffer too much.

In terms of their draw, two fixtures stand out. Clashes with the Storm and the Bunnies will help decide the Minor Premiership and top two spots.

With Cleary and Luai due back in two-or-so weeks the Panthers are well set to go one step futher than last season.

The Bunnies had a massive win over the Cowboys on Friday night. Cody Walker is in red hot form right now and shapes as key to their very real title challenge.

Alex Johnston and Taane Milne both ran in hattys, with the former looking ready to set try scoring records. Campbell Graham is making an argument for a top few centre in the game.

Souths are set for a top four finish, with five very winnable games in their last eight. Clashes with the Roosters, Panthers and Eels are mouth watering and could decide the top four make up.

Manly suffered a huge blow to their top four hopes on Thursday night with their 30-16 loss to the Raiders. Unfortunately it was a case of no Turbo/DCE no Manly.

Obviously when you take the two biggest stars out of any team they're going to struggle but there was little to write home about here in terms of positives.

This loss all but ended Manly's hopes of a second bite come finals time. The Storm and the Eels look their only tough challenges in the run in but I feel they've left it too late.

The Eels sat with their feet up during the bye week and watched bitter rivals Manly lose. This meant the Eels top four chances strengthened and as such they now look set for a second bite.

In the next eight weeks the Eels play the three sides above them plus their closest challengers the Roosters. We're going to learn a lot about Parra in the run in.

Their next three games; Titans, Raiders and Roosters, are very winnable and could pretty much secure a top four finish.

The Sharks stayed in the top eight with their bounce back win over the Warriors on Sunday. I believe that a loss here would have put them at severe risk of missing finals.

They need Shaun Johnson firing every week if they're any hope of making any impact this season. Will Kennedy has been very quiet since Matt Moylan's injury.

With only Manly and the Storm (who may rest players) looking games beyond them right now, the Sharks look a better bet than those below them to make finals, although you never know with this club.

The Chooks made it more difficult than it needed to be but ultimately beat the Bulldogs and look a lock to play finals. This despite a monster injury toll that now includes Joseph Suaalii.

With three very difficult games in their remaining eight, I think a top four spot is gone, however I'd be shocked if they don't 'host' a final in the first round.

The Titans move up a spot due to off-field issues and the implications of other sides. It's that, and purely that, that has me more convinced they'll play finals than those below them.

I'd argue the Titans have hugely underdelivered thus far in 2021 but have eight rounds to right those wrongs.

They have more than enough talent to play finals footy and with five VERY winnable games out of eight remaining, I believe they'll get there ... just.

The Dragons become the first team ever to drop a spot without playing after their horror week off-field brought upon themselves. Their stupidity this past week will cost them for the next month.

They currently sit inside the eight, a game clear of the chasing pack. They SHOULD be in the driving seat for a finals spot, only for their own actions to drag them back.

The Dragons will start favourite in three of their remaining eight fixtures so right now, if pressed, I'm suggesting they probably don't play finals.

The bye came at the perfect time for the Knights, although I bet Newcastle fans would have preferred a certain fullback to have his feet up this week rather than paying Origin Three.

Newcastle are one big win away from eighth spot, which is about where they deserve to be. They play Melbourne this week but otherwise face a relatively soft draw in.

Games against fellow finals hopes Cronulla, Canberra and the Cowboys shape as must win match ups. They may have left their run too late.

The Cowboys now look a shell of the side who won six out of eight games earlier this year. They now sit a game and massive points differential outside of finals positions.

The 46-18 loss to a side missing half their starting spine to Origin duty does not make for pretty reading. Jason Taumalolo has a massive game but his minutes are laughable at the moment.

Looking at their run in, the Cowboys are going to need a real turnaround in form to be anywhere near finals. A month ago I was certain they were finishing in the eight. Not so much anymore.

Canberra largely kept their finals hopes alive with a shock win over Manly on Thursday night. Sam Williams was electric while Josh Hodgson looked a million dollars as a playmaker.

Joseph Tapine is such a monster off the bench. Tom Starling is dead set super sub and changed the game when he came on.

Six of Canberra's remaining eight games are against other sides battling for finals spots, which means Canberra largely hold their own destiny in their hands. Must win against the Sharks on Saturday.

The Broncos would have enjoyed bye week far more on the back of their upset win over the Sharks. With a game against the Tigers to come, there's no reason they can't bank six points in a row.

Kantoni Staggs is under an injury cloud, which is a huge shame following his brilliant return against Cronulla. The Broncos Origin stars should back up against the Tigers given the long turn around.

The Broncs aren't playing finals footy, however there's enough wins left in them to distance from the Dogs and dare I say the Tigers also.

The Warriors finals chances suffered a near fatal blow in their close loss to the Sharks. They now sit two wins outside the eight with the Panthers and Bunnies in the upcoming fortnight.

Finals footy will be a tough slog but they're very capable of going on the kind of run that can put them in position. Should be fun either way.

The Tigers have had a week off and should be focused on a must win game against Brisbane this Sunday. A loss to Brisbane ends their season, it's that important.

Adam Doueihi has been named in the halves, where he belongs and where he had the Tigers playing their best footy. Alex Twal to the bench makes no sense.

The Tigers have underwhelmed this year, which is an understatement. I'm calling it now, they can't play finals but need to find some positives.

This feels like a copy and paste but the Dogs were brave, yet not good enough against the Roosters. They were in the contest until the literal last play which is a positive.

They play the Tigers twice, as well as the Sharks (who the beat earlier in the season) and the Warriors. There are winnable games there.

It looks like all eyes on 2022 for the Dogs. That's fine but they surely need a win between now and the end of the season.