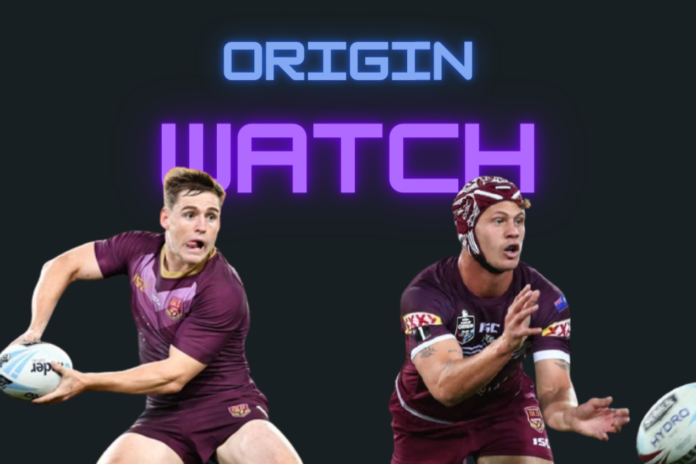 Aj Brimson, Valentine Holmes and Corey Allan replaced the obvious No. 1 choice Kalyn Ponga who missed the series through injury.

Brimson starred in his Origin debut in Game One. He looked to have the No. 1 jersey sewn up for the entire series until injury ended his hopes.

Holmes played okay in Game Two but is one of the game's best wingers, especially in the Origin arena, meaning a specialist fullback was required for Game Three.

SEE ALSO: The player from EVERY club to bring the magic to Magic Round

Corey Allan was downright incredible in the custodian role after his late call up. His form at fullback for the Bunnies made him a great option but no one could have seen what was to come in Game Three.

If Ponga had been fit, he would have played across all three games. There is no doubt in the world. His injury opened the door for three young stars, with two of them taking their opportunity while Holmes owns the wing spot for as long as he wants it.

Fast forward to the 2021 series and fit-again Kalyn Ponga looks odds on to return to his No. 1 jersey in the Maroons set up ... or does he?

Corey Allan's run at fullback didn't work out as hoped at the Dogs and he has found a new home in the centres, which rules him out of the running.

One player however who is going to push Ponga ALL the way comes in the form of Titans superstar Alexander 'AJ' Brimson.

Recently in the Titans vs Knights game it became apparent that the Brimson vs Ponga rivalry would last longer than across those 80 minutes.

Brimson burned Ponga early, and again further into the game, with Ponga returning the favour late on and holding up a "got one back" gesture to big smiles. Brimson took the honours that day and kickstarted the one-upsmanship that has continued to this day.

The QLD Origin jumper is a race in two. Ponga and Brimson.

I'll be absolutely shocked if both aren't picked in the squad, with one picked on the bench as the utility, but which player should start?

For the record Ponga is a clear favourite at this stage, but there should be a discussion as I don't believe it's as clear cut as some seem to think it is.

Full disclosure, I'm a monster fan of the Titans No. 1. If I'm picking a side from scratch, there are very few players I'm bringing in before Brimson.

He has had a brilliant start to the 2021 season and across the back eight rounds in 2020, he was the form player of the competition. If he had played the majority of games with that form, we're referring to him as the Dally M medalist.

So far in 2021 he has three tries, six try assists, seven line breaks, 23 tackle breaks and 159 running metres per game. This despite the fact that the Titans are four wins from nine games with a -1 points differential. Brimson has been the second most influential player behind David Fifita.

He is SO important to the Knights set up. He won that game against the Sharks on his own back despite being violently ill in the lead up. He was sick, on air, at half time and looked at long odds to to deliver his brilliant second half performance.

Both players are their clubs No. 1, creative threats. Both are in great form despite not quite reaching their peak, and both have Origin-winning experience.

Ponga's previous appearance for QLD in the forwards shows he can play anywhere. Brimson could be equally as dangerous off the bench. Can you imagine throwing him on in a roving role with tiring NSW forwards prior to half time? Yikes.

In terms of attack, Ponga is the better ballplayer but for mine Brimson is the more dangerous runner. That's not to say Ponga isn't; he's torn sides apart, but I'd rather Brimson bringing the ball back.

I'd also prefer Brimson under the high ball, every single time!!!

Ponga's habit of jumping early and catching the ball almost vertically makes me nervous every time there's a contested ball. He has been dominated in the air in Origin previously, with Tommy Turbo making him look silly on more than one occasion.

In terms of pure brilliance, match-winning potential, Ponga is your man. He can do ANYTHING.

He's also far more likely to drop a chest catch or throw a horrible pass. It's all part of the risks taken that makes him a brilliant player.

If both players are fit and firing, I can't see an instance where the QLD selectors don't go with the tried and tested Ponga. That said, if Brimson keeps playing as well as he is, there will be a line of thinking that sees Ponga come off the bench.

If Ponga isn't available, NSW can't afford to take a breathe before Brimson is just as brilliant and, at times, even more dangerous.