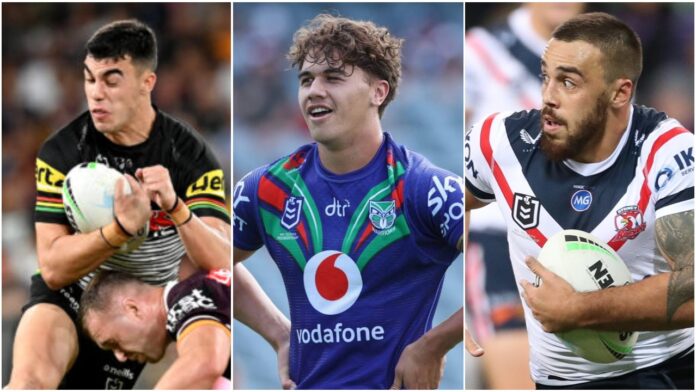 It's been another busy week off the field, with the Titans active in the transfer market and plenty happening at the Panthers, Raiders and Roosters. Here is the wrap.

The Penrith Panthers have claimed they are confident of holding onto gun Fijian second-rower Viliame Kikau.

CEO Brian Fletcher told Sky Sports Radio's Big Sports Breakfast on Monday morning that Kikau was likely to say, however, his comments will leave star hooker Apisai MKoroisau concerned about his future at the club.

The Sydney Roosters have locked in two signings for 2022, with Renouf Atoni to join the club, and Naufahu Whyte being granted a contract extension by the club.

Atoni joins the club on a two-year deal, while Whyte's contract will also see him stay at Bondi until at least the end of the 2023 season.

The Brisbane Broncos have confirmed the signing of Ryan James for 2022, while the Raiders have also reportedly confirmed Dunamis Luoi won't be offered a new deal.

The pair of experienced forwards have had indifferent seasons, with James only joining the Raiders ahead of the 2021 season after spending time at the Gold Coast Titans.

Penrith duo set to be squeezed out as salary cap bites

The Penrith Panthers are reportedly at risk of losing young duo Charlie Staines and Spencer Leniu.

It's understood the Panthers' salary cap situation for 2022 and beyond is dire, and clubs are circling for the duo.

The Daily Telegraph are reporting the Panthers still have five spots to fill for 2022, and that the price tag of Staines and Leniu - who are both on roughly $300,000 - could be too much for the club to handle.

The Sydney Roosters have confirmed five players will leave the club at the end of the 2021 season.

All five were already known, with Brett Morris, Josh Morris, Boyd Cordner and Jake Friend all going into retirement, while Isaac Liu will join the Gold Coast Titans on a new contract.

Both Matt Ikuvalu and Dale Copley are still off-contract heading into the 2022 season, with the pair of outside backs the only two players yet to have their futures addressed by the Bondi club.

Parramatta have announced the departures of Blake Ferguson, Joey Lussick, Michael Oldfield and Sam Hughes from the club.

Via an official statement released on Wednesday afternoon, Eels General Manager of Football Mark O'Neill paid thanks to the efforts of the quartet during their stints in for the Bankwest side.

FIVE potential options to play halfback at the Raiders

The Canberra Raiders need a new halfback if they are to go to the next level in 2022.

George Williams' departure left the club in all sorts of trouble throughout 2021, and while some will say it's slim pickings, the Raiders have some excellent options off-contract or likely to be available.

We name the top five options to head to the nation's capital.

Melbourne Storm star Brandon Smith has spoken out about future, claiming it would be "virtually impossible" to say no to the Storm.

Smith is one of the game's most hotly-chased signatures, with clubs reportedly lining up to talk to Smith when he is free to begin negotiations from November 1.

Off-contract at the end of the 2022 season, the Storm are reportedly desperate to hang onto the star hooker and lock.

According to The Daily Telegraph the club have offered the Kiwi an extension until the end of the 2025 season.

Eels turn attention to retention ahead of contract crunch

The Parramatta Eels are reportedly beginning to sort out their contract situation for 2023.

It has previously been reported that the blue and gold would face something of a contract crunch heading into the 2023 season, with plenty of off-contract stars likely to be in line for upgrades.

READ MORE: Key calls to be made at Parramatta

The Brisbane Broncos have reportedly withdrawn any interest they held signing ex-Titan Tyrone Peachey, per reports from The Daily Telegraph.

The news come in the wake of Peachey's seismic contract demands that were set before any potential suitors ahead of next season.

As was reported last week, the 30-year-old playmaker was said to be seeking a four-year deal worth around $450,000 per annum to remain in the league.

Gold Coast Titans' co-captain Jamal Fogarty has been linked with a shock move to the Canberra Raiders.

Despite only signing a contract extension earlier this year, tying him to the south east corner of Queensland until at least the end of 2023, the Raiders are said to be keen on the consistent half.

First reported by Pete Badel of the Courier Mail, Fogarty paints an intriguing target for the green machine.

Conflicting reports have since emerged however, suggesting the Titans are unlikely to grant their co-captain an early release.

FULL STORY: Skies unclear on future of contracted Titans half

It was only a week ago gun Queensland Origin forward Tino Fa'asuamaleaui spoke of his desire to stay at the Gold Coast Titans, and now it appears the club are going to dish out the big dollars to keep their star.

The young gun, who shifted from the Melbourne Storm ahead of the 2021 season, has had a phenomenal season on the Gold Coast.

READ MORE: Tino hoping to remain a Titan for life

Raiders shown the door on another half

The Canberra Raiders have reportedly made an approach for New Zealand Warriors' half Chanel Harris-Tavita, only to have the door slammed shut.

While he has struggled for game time between various injuries this season, Harris-Tavita is still on contract into 2022 with the Warriors.

That being said, there has been plenty of speculation out of the Warriors' camp surrounding the future of their own halves.

The services of Warriors prop Kane Evans are understood to be on offer to Super League clubs, according to the Yorkshire Examiner.

Evans first joined the Warriors from Parramatta on a two-year deal, with the 29-year-old contracted to the Auckland-based club until the end of next season.

The Fijian international will be able to speak with other clubs from November 1, however there is belief the Warriors could release Evans prior to the conclusion of his current deal and even pay a percentage of his next contract in order to land an agreement.

A playmaker swap deal between the Titans and Raiders could be the win-win scenario both clubs are chasing to strengthen their finals contention for 2022.

According to News Corp's Brent Read, "internal talks" at both Gold Coast and Canberra surrounding the futures of Jamal Fogarty and Josh Hodgson have reportedly taken place.

Fogarty's future has been highly speculated this past week, with conflicting reports suggesting the Titans co-captain has been linked to the Raiders, while the Titans aren't keen to release the 27-year-old to the nation's capital.

READ MORE: Hodgson for Fogarty: Who says no?

The Cowboys' stocks have been bolstered by the signings of a pair of Fiji's Rugby Sevens stars for next season.

Iosefo Masikau and Taniela Sadrugu have agreed to terms with the Townsville side and will join their new teammates in November in an attempt to aid the club's return to the finals in 2022.