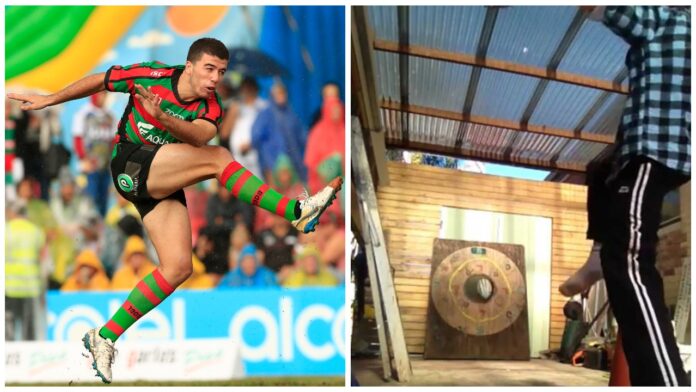 Dean Hawkins was only informed by Wayne Bennett on Tuesday that he’d be making his NRL debut this week, but this maiden first-grade appearance has been a long time coming.

Hawkins will come off the bench against the Broncos on Thursday night, likely into the halves with Benji Marshall to slot back into the drifting lock role he’s been filling over the opening month of the competition.

Rising through the Rabbitohs’ ranks via their Jersey Flegg and NSW Cup side, the 22-year-old has drawn comparisons to teammate

Adam Reynolds with his astute kicking game and playmaking abilities. Though while Reynolds honed his trade on the streets of Redfern, kicking a footy at lamp posts and garbage bins, Hawkins had a different method.

Better known as ‘Footy Dean’ online, Hawkins ran his own YouTube channel at age 13, showing the world his footballing ability. Whether it be a short kick, a flick pass or showing us ‘how to make a line break’, the halfback has the skills in his arsenal to make an impact.

Former teammate Jack Johns gave followers a taste of Hawkins’ most viewed video, ‘Kid kicks off a cone into a small hole (10m)’, via his Instagram story, showing a young Hawkins giving fans a taste of his kicking game.

If you thought that was impressive, wait until you see the youngster perfect his flick pass in another show of the debutant’s ability.

With a whopping near 700 views on his ‘Kid kicks off a cone into a small hole’ video, there’s no doubt that Hawkins is already a star before he runs onto Stadium Australia tonight.

How much game time he sees will dictate how much of this wide skillset fans will get to see, but regardless, best of luck to Dean on his debut!

The EIGHT big questions ahead of Round 7