Three debutants have been included in this week's team of the week after excellent performances in their opening showcase to NRL fans.

Lachlan Miller, Ezra Mam and Michael Molo have also been joined by Tigers' interchange player Fa'amanu Brown, who had an excellent showing from the Tigers' bench in his first game back after long-term injuries threatened his career.

All four players were statistically outstanding and made the cut under the algorithm for this week's team.

Elsewhere, familiar faces continued to make their appearances, although there have been changes at hooker and lock - two points dominated by the same players on rotation over the first ten weeks of the 2022 NRL season.

Round 11 team of the week

1. Lachlan Miller (Cronulla Sharks)
Miller had a superb performance for the Sharks in his debut, and it was just enough for the former Australian Rugby Sevens star to edge out Cody Ramsey for the number one jumper.

He came up with a staggering 294 metres, a try and nine tackle busts. 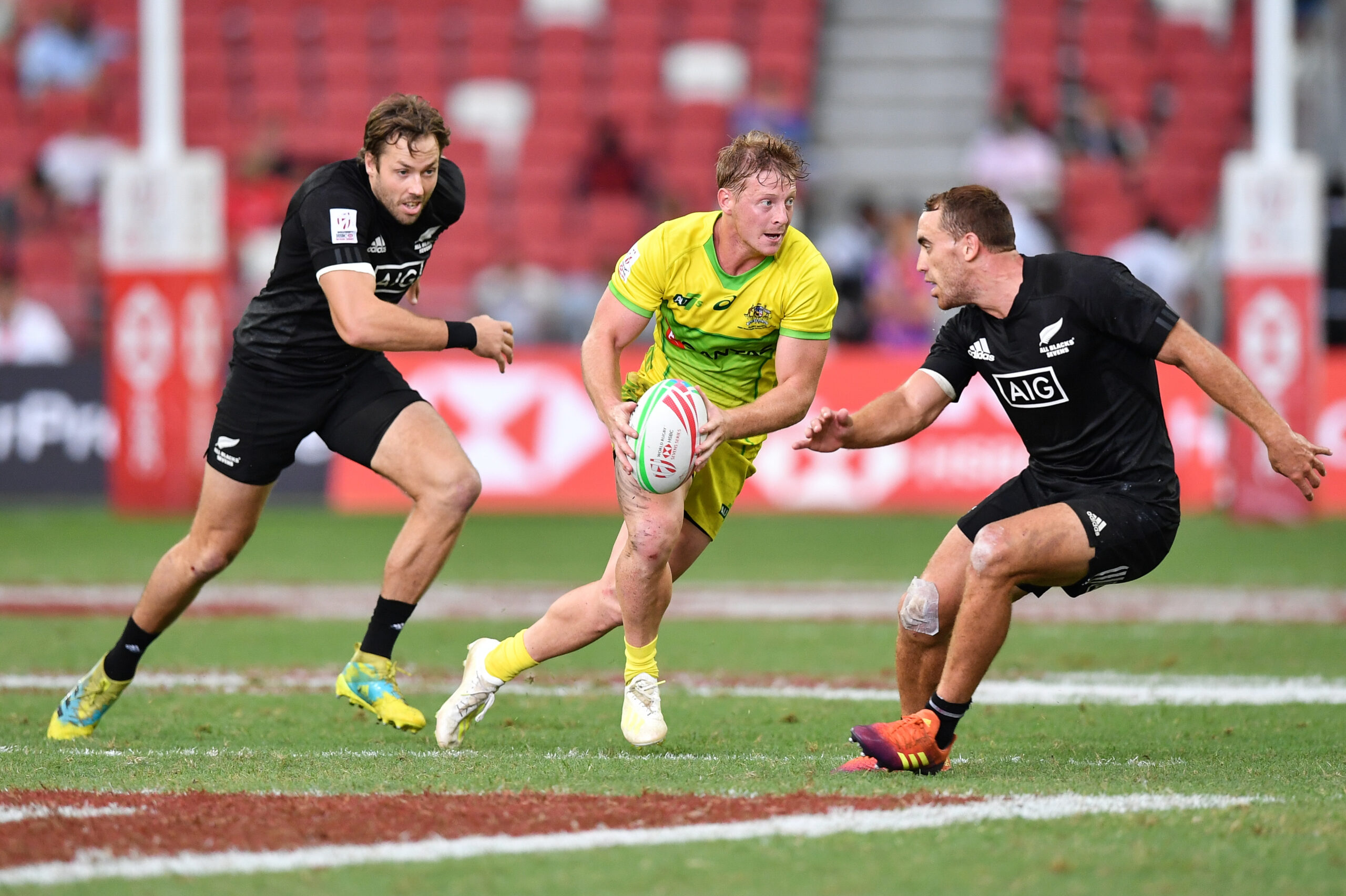 2. Selwyn Cobbo (Brisbane Broncos)
Cobbo had the highest individual score of the week on the back of an excellent performance for the Broncos.

The young winger, who is pushing for a spot in the Queensland Origin team, has taken his game to another level, and that continued on Thursday with a double, 224 metres, nine tackle breaks and three clear line breaks.

3. Will Penisini (Parramatta Eels)
Penisini scored a try and ran for 136 metres during the Eels win over the Sea Eagles, but also had five tackle breaks in a strong display from the young centre.

4. Tom Opacic (Parramatta Eels)
Like his teammate, Opacic had a try, but was also excellent out wide in combination with Bailey Simonsson as he edged out Connor Tracey, Zac Lomax and Peta Hiku for the final spot.

He added to his stats line with a try assist, line break and 21 tackles at perfect efficiency.

5. Ken Maumalo (Wests Tigers)
The Wests Tigers winger was criticised heavily during the opening weeks of the season for some of his performances, but it has become clear that he took those remarks rather personally.

Maumalo's form has, well and truly, shifted around the corner, as has his effort, and the veteran winger came up with 153 metres from 17 carries, two line breaks and two tries in Wests' high-scoring win over Canterbury at Leichhardt.

6. Jarome Luai (Penrith Panthers)
Luai wins his way into the team in the number six jersey after steering the Panthers past the Roosters in what was a man of the match performance.

Luai scored the opening two tries, made 105 metres, added a line break and five tackle breaks, and kicked well to back up Nathan Cleary.

7. Ezra Mam (Brisbane Broncos)
The debut of Mam is one that plenty of fans have been looking forward to for some time, and the absence of Adam Reynolds paved the way for the youngster to have his first crack in the NRL.

He didn't disappoint either, raising questions about whether his running game will ultimately make him the best option to partner Reynolds in Brisbane's halves moving forward.

Mam came up with 114 metres, two try assists and three tackle breaks to win the race for the seven jersey by ten points. 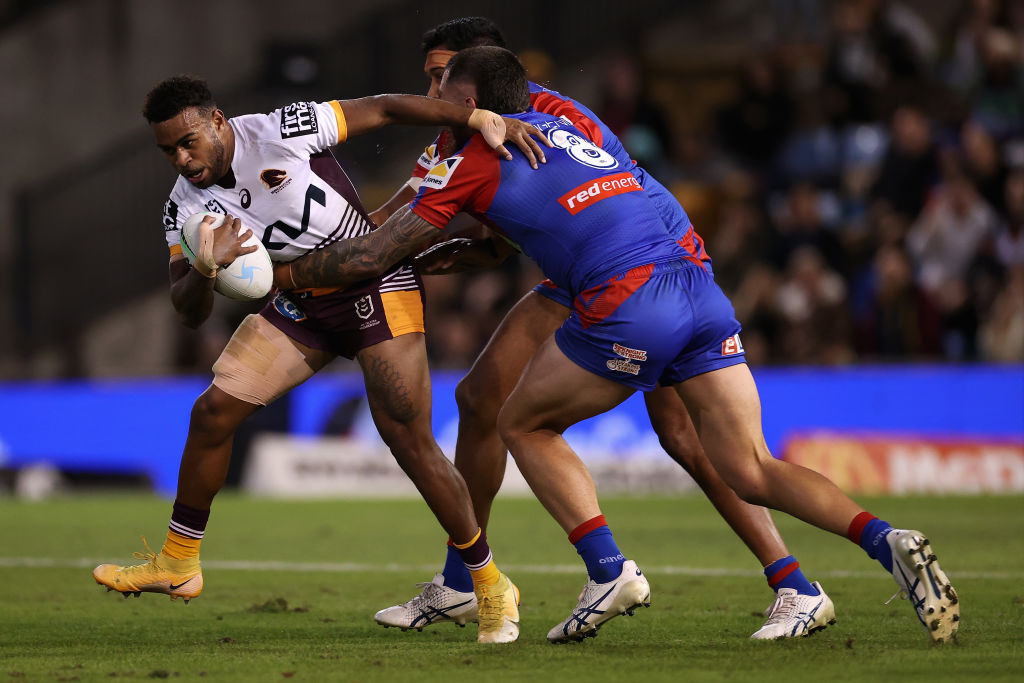 He came up with 145 metres from 17 carries, a line break and two tackle breaks to support the try he scored as he led Penrith's forwards on a demolition job of the Roosters.

9. Blayke Brailey (Cronulla Sharks)
Brailey's spark out of the ruck for Cronulla was superb on Sunday against the Titans, running for 91 metres and adding a try assist in a performance which saw him stamp all over the opposition's, at times, incredibly weak defence.

He also came away with 45 tackles and no misses.

10. Josh Papalii (Canberra Raiders)
Papalii turned up in a big way for his 250th NRL game, showcasing all the hard-hitting running and tackling which have turned him into one of the best props in the competition for a very long time.

He scored a try, added 114 metres and a line break, and was a general menace at both ends of the park for the well-beaten Rabbitohs pack in what is his second straight nomination.

11. Jeremiah Nanai (North Queensland Cowboys)
Nanai has a serious ability to find the tryline for a forward. That much has become clear over the first half of this season.

The young Queensland bolter scored another two in North Queensland's rout of the Storm, also running for 114 metres, adding a line break and four tackle busts.

12. Luke Garner (Wests Tigers)
Garner has been in excellent form over the past couple of weeks for the Tigers, whether that be in the centres or in the second row.

He spent time in both spots during Friday's clash with the Bulldogs and didn't let coach Michael Maguire down, running for 131 metres, scoring a try, adding three tackle breaks and also 29 tackles. He sneaks into the team ahead of Hudson Young and Jordan Riki by a single point.

13. Joe Ofahengaue (Wests Tigers)
Ofahengaue burst onto the NRL scene a number of years ago and has had some very quiet seasons since.

2022 is not shaping up as one of those though, as he turns the Tigers' number 13 jumper into his own and pushes for one of Maroon colour in a few weeks time. Another 65 minutes against the Bulldogs saw him run for 160 metres, add a try assist and a couple of tackle busts, and 29 tackles. 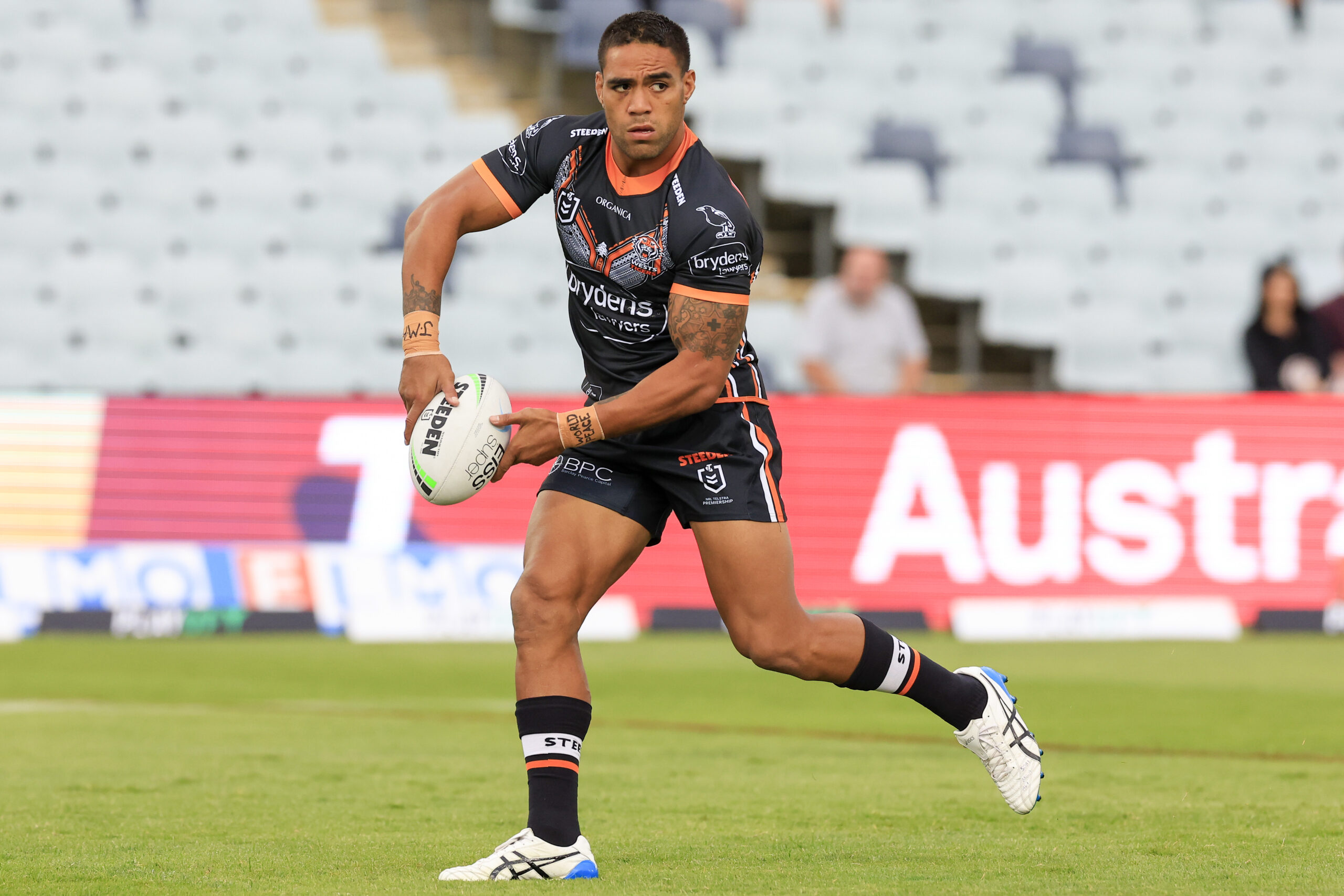 14. Ryan Matterson (Parramatta Eels)
It's starting to get to the point where Ryan Matterson is the first player picked on the bench every week, and I might as well copy and paste his name into an early draft for next week.

Another leading performance in the narrow win over Manly saw him add 177 metres, four tackle breaks and 32 tackles without a miss. His shift to the middle is looking like a masterstroke.

His career was all but over a few years ago. In fact, it could have been if he didn't sneak the saving surgery in the day before lockdowns began for the coronavirus.

His return on Friday, having spent the first part of this year on a train and trial deal with the Roosters, saw him cross for a couple of tries and perform like a livewire. There'll be more first grade minutes around the corner for him one might suspect.

16. Tom Starling (Canberra Raiders)
Starling just continues to go from strength to strength, even in his role off the bench.

The spark he provides is second to none among bench hookers in the competition, and he came up with 81 metres and two try assists to rip shreds off South Sydney in Dubbo.

17. Michael Molo (St George Illawarra Dragons)
The third of the debutants to make the team, Michael Molo - younger brother of one-time Queensland prop Francis - played 47 minutes from the bench, crossing for a try, making 62 metres with two line breaks and two tackle busts, to go with 34 tackles without a miss.

He edges out Scott Sorensen for the final spot in the team.