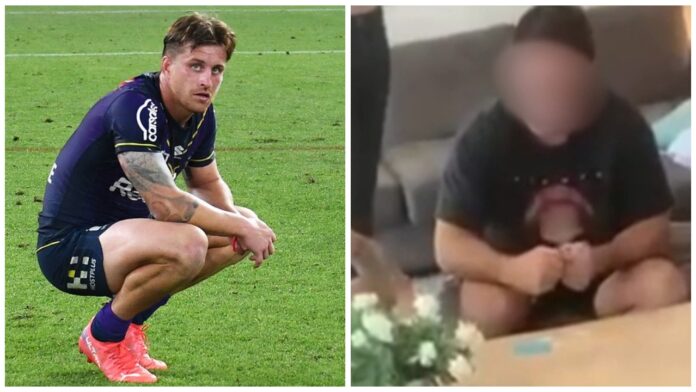 Melbourne Storm stars Brandon Smith and Cameron Munster are reportedly facing a hit to the hip pocket and a delayed start to the 2022 season for their roles in the latest off-field scandal.

According to a collective of News Corp journalists, Smith, 25, and Munster, 27, are set to be slapped with two-game bans and fines in the vicinity of $40,000 following their initial dialogue with the game's Integrity Unit.

Fellow Storm player Chris Lewis is also facing a stint on the sidelines for his involvement in the footage that included the collective and what is believed to be a banned substance.

With the Grand Final still yet to kick off this weekend, the trio will reportedly learn their fates following the decider's final whistle.

Though the trifecta are without doubt in hot water, it is believed that the rake, half and second-rower will all avoid strikes against their name due to a pair of factors.

Unlike the Warriors' wonderkid Reece Walsh, neither Smith, Munster or Lewis have admitted to indulging in any illicit substances, and as the Storm's season had drawn to a close prior to the footage being captured, none of the at risk group can be drug tested without consent.

As stated in the aforesaid report, a strike can only be registered against a player's name if they confess to any law breaks and is something that Munster was reportedly unwilling to do in his conversations with the Integrity Unit, as he maintained he had no recollection of the events in question.

Still, Melbourne's CEO Justin Rodski has claimed in an official statement released on Tuesday night that the group have been willing to cooperate with the ongoing investigation.

Melbourne Storm can confirm three of its players have been interviewed by the NRL Integrity Unit today.

“The club is taking this matter extremely seriously. We are very disappointed to be in this position and will be thorough in our response,” Rodski said

“The players involved have fully cooperated with the NRL and the NRL Integrity Unit investigation. It is our understanding this investigation is unlikely to be concluded this week."

Though the league's governing body will continue taking matters into their own hands, the Storm suit suggested that the incident would also be reviewed in house by the club.
“Melbourne Storm unashamedly sets high standards and makes no apologies for protecting and upholding the professionalism and values of our organisation," Rodski continued.

“The club is conducting its own investigation into the matter and will provide an update on our findings in conjunction with the NRL when both processes have concluded.

“The club will make no further comment on the matter until the NRL Integrity Unit has concluded its investigations.”

Although similar episodes to this have played out on several occasions with NRL players, ARL Chairman Peter V'Landys was quick to suggest that the competition did not have a substance abuse issue.

“I don’t believe we have a drug problem, no more than what’s happening in the community," he said.

“I can’t fathom why players would want to put drugs into their body, hurt their body and fry their brains.

“That’s why I say to players ... ‘Why would you want to jeopardise your health and fry your brain?’"

The often polarising powerbroker also stated that due to the game's stars being public personalities, they often faced more stringent scrutiny that the average person on the street.

"The players are part of society and drugs are in the community, so naturally that will translate to rugby league as well," V'landys continued.

“The only difference between us and the community is our players are high-profile. People are more aware of it, but on a percentage basis, it’s probably worse in the community than what it is in rugby league.

“No-one reads about their next-door neighbour doing drugs. There is a drug issue in the whole community, it can’t just be isolated to rugby league.

“We have more than 400 NRL players and I would argue on a percentage basis we are much lower than the general community. There are a lot of players doing the right thing, but drugs can migrate into our industry because it’s out there in society.”

NRL CEO Andrew Abdo also declared that the actions of Smith, Munster and Lewis had left him "disappointed" and "frustrated" due to their actions being counterproductive to the league's tireless efforts to keep the game going during Covid uncertainty.

Abdo also stressed that if rules were broken the players under the microscope would face punishments.

As mentioned, the Integrity Unit is set to hand down a verdict on their finals following the cessation of the season.