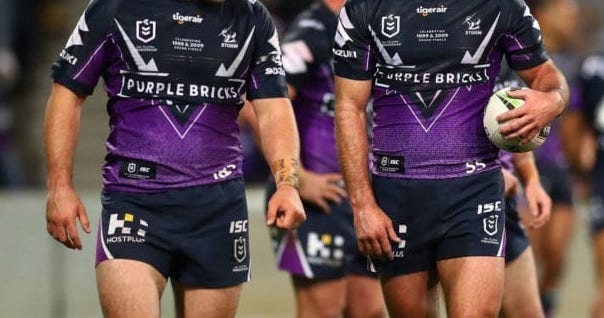 Although the trifecta of Storm names that were caught on film in the vicinity of a white substance are set to face sanctions from the NRL's Integrity Unit, their punishments will not end there.

According to Melbourne officials Justin Rodski and Matt Tripp, each of Brandon Smith, Cameron Munster and Chris Lewis are in line for further admonishment from their own club and will be made to address their misbehavior to the powerhouse's fanbase via a formal address.

Akin to Reece Walsh's admission for a similar charge last weekend, the trifecta of 'bad boys' will be present in an address once the investigation is brought to a close. As previously reported, Smith, Munster and Lewis can expect to be hit with both a two-week suspension ahead of the 2022 season and a financial sanction of around $40,000 each for their actions.

Speaking yesterday, Storm CEO Rodski fervently stated that collective had "made a poor error in judgement" and "have let their club down - their teammates, their coaches, our staff, partners and you - our members and fans - who look up to them and support them."

Rodski also claimed that although the members of the previously well-behaved side were "extremely remorseful and embarrassed", they had also let the club's proud "standards slip".

Club owner Tripp echoed Rodski's views by suggesting that the Storm's "strong culture" had been "tarnished".

While the extent of the intramural punishments is not yet known, News Corp reported on Thursday morning that they will unlikely have an impact on Smith's on-going contractual discussions with the club.

Smith, 25, is set to enter the final year of his deal with the Victorian club in 2022, but has been tabled an extension to remain in purple beyond the cessation of next season.

The Integrity Unit's findings into the apparent breach are set to be finalised and handed down in the week after Sunday's Grand Final.