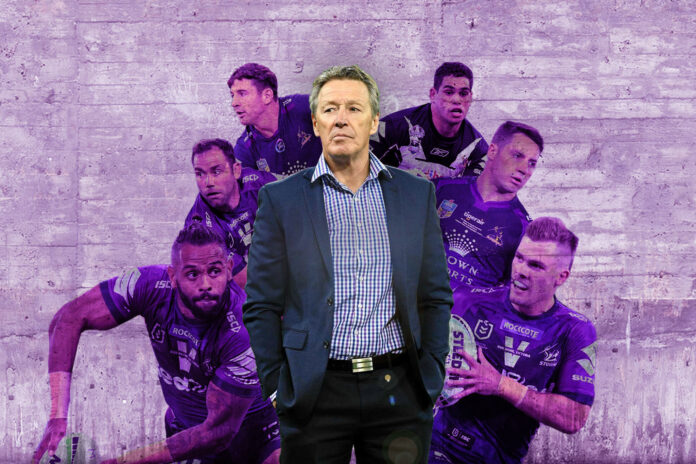 When most hear the word Portland, they think of Damian Lillard, the superstar NBA point guard for the Portland Trail Blazers in the US. But tucked into New South Wales' Central West, hidden between Bathurst and Lithgow, is a little country town by the same name.

Despite the town being called home by a mere 2,500 people, they've managed to produce a superstar of their own - Craig Bellamy. The man now known as 'Bellyache' had humble beginnings before becoming the premiership-winning coach he is today.

Ask anyone around Portland that knows Craig, and you'll see where that love for high-intensity football started. Just a young bloke, Bellamy would run from his house to footy training, complete a full fitness session, and then sprint home. So much was his love for staying in shape and producing his best, he's translated it into one of the best coaching careers in the modern era.

When you utter his name, the first mental image of Craig Bellamy that comes to mind is a quick camera shot of his coaching box, where you'll find him red-faced and livid, screaming through the glass at a refereeing decision or dropped ball - even if his side are probably being up by 30.

He demands consistency and effort, not just victories.

But before Bellamy had blown the pea out of a thousand whistles at training, he was a player. A good one too. Many coaches in the NRL have a past career as a player, but many just play a handful of matches, before transitioning to coaching.

Bellamy managed 148 games in a Canberra Raiders' jersey, debuting at 22, and enjoying 11 years of first-grade at the club. In fact, he won a premiership as a player in the 1990 Grand Final, playing alongside names like Ricky Stuart, Gary Belcher, Laurie Daley, Mal Meninga and Steve Walters as they claimed victory over Brad Fittler's Penrith side.

He departed the club after that to captain-coach Wagga Wagga, before a short stint in England that lead to a Raiders swansong in 1992.

As all coaches do, you have to bide your time before taking your first head coaching gig.

Bellamy's coaching career began the same place his playing career did - Canberra. He took their reserve grade side to a premiership in 1995, before eventually landing as Wayne Bennett's assistant at the Broncos in 1998.

Shock horror, they won the premiership that year.

For the most part, he sat idle at Red Hill for a few more seasons, although Bellamy head coached the club twice in the 2002 season while Bennett was on Origin duty.

It didn't take clubs long to notice Bellamy's potential after he led the baby Broncos to an underdog win over Wests, and as soon as Mark Murray was sacked by Melbourne, the Storm had a new target.

There's a crazy stat that's followed Craig Bellamy through his career - he's never lost a Round 1 clash as a head coach.

Technically, he lost one 'first game of the season' in 2004, a Round 2 match-up with Newcastle, after the Storm had a bye in the first round.

And in his Melbourne coaching debut - Round 1, 2003 - it would be no different. He handed a kid a debut that day, a skinny 19 year-old  from up north that went by the name of Billy Slater.

There was another youngster in the team who actually shared his birthday with Billy. Same day, same year, about 100 kilometres apart. He'd played two games of first-grade the year before, both at halfback. Bellamy had taken one look at him and decided he's playing the wrong position. That was the day Craig Bellamy decided Cameron Smith would be his hooker.

They beat the Sharks 36-32 that day, Billy scoring his first of many NRL four-pointers, and just like that, Craig Bellamy's coaching career in Melbourne was off to a flyer.

The production line was in full-swing during the Bellyache era.

Slater and Smith were the first two to emerge under his coaching, and later that year, we saw Matt King earn his maiden NRL jumper. The next year it was Cooper Cronk, the year after it was Greg Inglis, two years afterwards Israel Folau made his name.

Bellamy can thank his recruitment officer, Peter O'Sullivan at the time, for the gems he received.

In just his fourth year, he'd make his first NRL Grand Final, in his fifth he'd go on to win* it.

After 18 complete years of coaching in the NRL, he's made the finals 17 times. His only blemish coming after the club was stripped all of its 2010 premiership points, but we'll get to that.

He's made ten NRL Grand Finals, with six* premierships and six* minor premierships (two of each were later stripped).

The sign of a good coach in the NRL isn't just what they accomplish themselves, but what they can lift others around them to accomplish. He didn't just bring through good talent, he recruited well. Recruited smart. And you only need to take one look at who he has turned around to realise it.

It's freaky to see how well players improve under the Storm head coach. Look at Reimis Smith and George Jennings this season, imagine what Xavier Coates will do in 2022, as he's arguably the most high profile recruit in a decade.

Bellamy has always managed to keep the same structure around his side - develop the stars.

You develop the stars, and surround them with consistency. Not stars beforehand, solid players, the ones that won't upset the apple cart, they simply go out and do their job, and do it on a consistent basis.

ALSO FROM AUTHOR: Gould's fingerprints are all over Penrith's current success

Simplify their role, narrow their focus and watch them go. Not only do you watch them rise within their role, within the structure, but watch the individuals struggle after they leave it. There's so many success stories, including Brian Norrie, Josh Addo-Carr, Marika Koroibete, Todd Lowrie.

You've also get the inverse. The ones that left, and became a shadow of the player they were in Melbourne, such as Dane Nielsen, Adam Blair, Sisa Waqa, Jordan McLean and Brodie Croft.

Craig Bellamy was the consistent factor in their consistency.

Look at the head coaching world in the NRL. How many began to ply their trade in the NRL as Bellamy's assistant coach?

Brad Arthur, Adam O'Brien, Michael Maguire, Anthony Seibold, Stephen Kearney, Kevin Walters, Dean Pay, Nathan Brown. The list just grows and grows. Even Shane Flanagan spent time as his right hand man for three Origin series. He plants the best seeds of anyone in the NRL, his influence stretches beyond what he does.

Every career has its lowest moment.

There are no such things as ups without the downs that accompany them.

Craig Bellamy's low came in April, 2010, when the NRL unveiled proceedings that showed Melbourne had been cheating the salary cap, from 2007 to 2010. A few behind the scenes payments and gifts were made to keep this crop of stars together. They were fined over a $1,000,000, and lost their 2007 and 2009 premierships, they lost their 2007 and 2008 minor premierships, they lost all and the ability to earn more premiership points for the remainder of the 2010 season.

It all came crumbling down. Just like that, Bellamy didn't have a premiership to his name, or a minor premiership trophy. He lost his World Club Challenge as well. You won't see a more famous image in his career than Bellamy walking across the AAMI Park field on that day, his entire playing group behind him.

Not just literally, either.

He had to shed a stack of stars to become cap compliant.

The club would lose Greg Inglis, Brett Finch, Brett White, Jeff Lima, Ryan Hoffman and Aiden Tolman. Superstars of the club gone, but Bellamy kept his structure. He had his three stars, Slater, Smith and Cronk - now he needed to surround them with consistency.

He brought in players like Beau Champion, Jaiman Lowe and Adam Woolnough, they weren't superstars but they all did their job and played to the structure in place. To Bellamy's credit, just 17 months after one of the games darkest days, Bellamy had taken the club from a wreck, to minor premiers.

The next year, they won the premiership.

Not only did it immediately put that controversy behind him, it cemented him as one of the NRL's all-time great coaches, and one of the games most resilient men. During the ten full seasons between 2011 and now, Bellamy has coach his side to five Grand Finals, three premierships between 2012 and 2020 with four minor premierships.

He never slows down.

Nearly 62 years old, Bellamy is the same man that would run down the streets of Portland, complete his fitness session at training, and sprint back home. He gets out and trains with the club, often there were times in pre-season trial runs he'd bet his own players to the finish line. He's a born competitor, and you can guarantee it's that competitive streak that has kept him winning in the NRL all these years.

Even last year, the club was forced to relocate to the Sunshine Coast after COVID took over Melbourne, they spent the year living out of a resort, away from family and loved ones, away from their home for months on end. Bellamy held the club together, and took them to glory again. It takes a leader to bring a group like that together, when you're dealing with homesickness and uncertainty.

They were just forced to spend seven weeks up there again this season and they didn't drop a single game.

Trent Robinson is in the conversation now and Des Hasler has faded slightly, but there's an argument to be made that Bellamy is the best coach of the 21st century.

He's faced adversity in so many ways, scandals, COVID, even suspensions and injuries, losing stars.

He's been through it all.

He was close to departing the club after this season - his 19th season with the Storm. Although the twilight of his glittering days at the Melbourne Storm are coming to an end, that doesn't mean he'll slow down.

Cronulla wanted him, Brisbane tried to snare him, but it appears a certainty he'll remain in the cloudy city for a 20th season.

Plus, having only lost games in Rounds 2 and 3 of this year, there's every chance he could add to that trophy cabinet in 2021. The man never slows down.

He doesn't demand wins, he demands perfection. Both from himself and his team. That's why when they're up 40-0 and drop the ball, you see Craig red in the face, a thin veil of spit on the interior of the glass from his last 70 minutes of screaming in the box.

He demands that his players play to their best, and an error won't cut it.

Passionate, competitive, hard working, resilient. Each and every word in that category springs to mind when you mention Bellamy's name among rugby league fans, he looks for the same in his players. He won't sign anyone unless they agree to a face-to-face one-on-one with the Storm head coach.

There's more than ability in this world.

There's grit, there's work ethic, and importantly to Craig Bellamy, there's character. He has it in bucket loads, and all signs point to him continuing over the next few years. He'll keep overcoming hurdles, pushing himself and his players to their breaking points, and demanding excellence from all of them.

You know what they say, you can take the boy out of Portland...