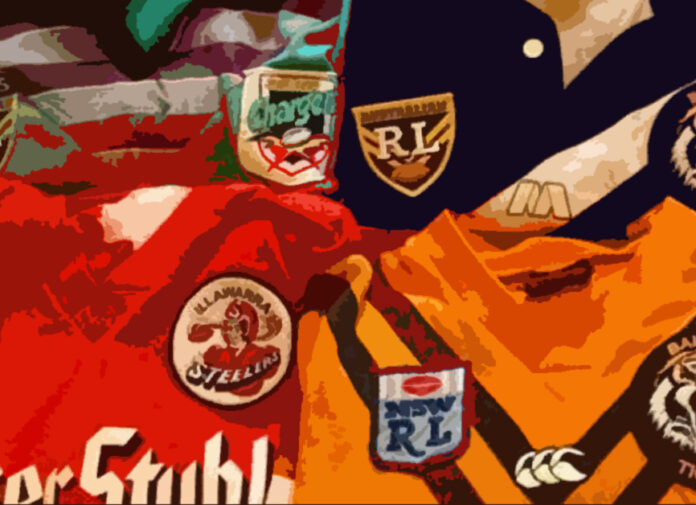 For a game with a rich history of more than 110-years, Rugby League has met many milestones and created many pieces of ephemeral and eternal memorabilia.

And if these aforementioned pieces come emblazoned with a club's badge, a sponsor’s logo and a number attached, you can be sure that Steven Russo has eyed it off for his collection.

For the communications professional from Sydney’s inner-west, Rugby League may have been a love that was acquired later than some, but when the Wests Tigers sunk their claws into him during the mid-2000s, a life-long passion was born.

“I wasn’t actually really that into sport as a kid. It was only when I became a teenager that I became interested in it,” Russo told Zero Tackle.

“The thing that appealed to me about Rugby League was that even though by that time Balmain had become Wests Tigers, I liked the idea of a club representing a suburban area.

“I grew up in the inner-west, so obviously Leichhardt Oval was very close to where I grew up and I liked the idea that a club in a national competition representing a suburban area or neighborhood.”

With the merged side purring off the back of their 2005 premiership, and his ‘main man’, Benji Marshall, beginning to stake his claim as the game’s most exciting prospect, Russo took the first step in what has since become a lifelong obsession - he purchased a jersey.

In the 17 years since this life-altering acquisition, the Tigers’ form may have been relatively tame, however, Russo’s collection has well and truly gone from strength to strength. 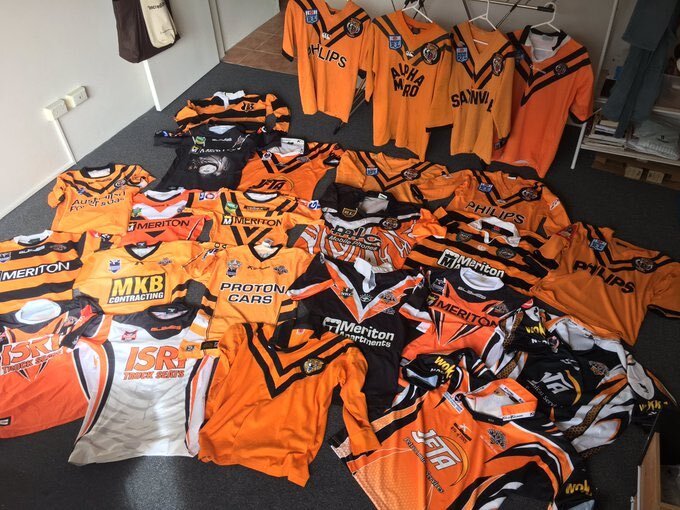 SEE ALSO: Zero Tackle's Round 10 Team of the Week

So much so, that the garment guru has lost count of how many kits he currently has in his cluster.

“I haven’t actually counted, but I would probably say it would be about a hundred. I can’t tell you for sure,” Russo said.

“I haven’t really sat down and counted them.”

Although the more fiscally minded folks in society would have collated their wares and put a price on their tangible archive of the game’s history. For Russo, his bevy of jerseys has entered a state of financial ambiguity.

“I would have to call it priceless. I mean the thing with jerseys is that the prices just vary. It can fluctuate,” Russo said.

“From my perspective, it [the 100 strong collection] is priceless, so I couldn’t really tell you.” Despite offering uncertainty to this line of questioning, Russo was far more unequivocal when it came to answering which piece he would save if his wardrobe went up in flames.

Anyone that has ever kicked off a collection or leant into a hobby will tell you that once you start, it is awfully hard to stop – just switch on any of the plethora of ‘hoarding’, ‘picking’ and ‘collecting’ shows that comprise the vast majority of 7Mate’s scheduling if you don’t believe me.

Online and physical marketplaces necessitate that there is always something new to see, add or aspire to, with Russo proving no different to any  of the other barterers in the bazaar.

So strong is the pull to continue improving his collection, Russo believes that his work scouring racks – both digitally and in person – will never be done.

“For a long time, I thought at some point it must feel as though it is complete, but I think I have to say that it will never really be complete,” he said.

“So as much as I hate to say, and I’m sure a lot of my loved ones wouldn’t be happy either, but I suspect that it will never actually be complete. I’ll always be looking to add something new or rare to the collection.”

Although his heart resides somewhere between the Wayne Pearce Hill and the fig trees at the northern end of Leichardt Oval, when it comes to adding new outfits to his assembly, the freelance writer leaves his loyalties at the door.

“My latest Rugby League purchase was a 1988 St. George jersey,” Russo explained to my bemused ears.

“Even though I’m not necessarily a St. George fan, I just really liked the jersey.

“It’s probably not player worn, but it was made by the same manufacturer [Westmont] as the player’s model.”

Russo explained that although branding and licensing rights in the contemporary game are concrete, things were far more malleable in decades gone by.

“Back in the 80s, they were pretty hard to track down because you could have five or six different companies making the same jersey, but this one was made by the same brand as the player’s,” he expounded.

“So, for all intents and purposes, it looks exactly the same as the player’s one, so that’s why I wanted it.”

Still, despite this wavering, the Tigers fan, Newtown Jets social media manager and born and bred Australian was quick to return to his roots when it came to selecting the three jerseys that make up his materialistic Mount Rushmore.

“I think being a Tigers fan, the Balmain 1989 jersey is the most iconic from my perspective,” Russo answered.

“I guess I would say the Newtown 1981 jersey sponsored by Paramount Shirts as being another really iconic one from my perspective.

“One out of the box I like, and I will never have an original, but I have modern re-issues, but I quite like the Australian Rugby League jersey that they had between 1908 and 1924.”

Once again, Russo proved that a treasure trove of understanding lay behind his keen eye.

“Australian didn’t start wearing the traditional green and gold chevrons until the late 1920’s. Prior to that, they wore blue and maroon butcher stripes,” he explained.

“They wore a replica of it in 2008 when they played the Kiwis in what they dubbed the Centenary Test.

“They also wore the same style against England in 2014 when they played in Melbourne to commemorate a test match that was dubbed ‘Rorke’s Drift’.

“It’s sky blue and maroon, so it is the two state colours combined. I just think it is a really nice-looking jersey.”

Readers may have begun to notice that the fervent collector prefers to part with his hard earned on second-hand items rather than those that come brand new with tags. When posed the question as to why, Russo was enthusiastic in his justification.

“I have always had this thing that I want jerseys that are as close as possible to what is being worn on the field,” Russo explained.

“These days at standard sports shops you can only get replicas, and because I am quite particular in that regard, I don’t tend to buy from Rebel Sport because you can’t get the actual player issue jersey from there”.

Despite holding this preference, it means that a lot more work must be undertaken than just tapping a card at a shop counter.

“You have to find other means of buying them, whether that is buying direct from the manufacturer or buying in private sales,” Russo said.

Even though the 30-year-old may spend far more dollars and time on jerseys than the average League fan, his love of garments has not superseded his love of the game.

“I think the garments are a big thing that I love about the game, and I think a lot of the reason why I talk about them a lot is that it is kind of my niche.”

“It’s kind of what I have a good knowledge of relative to the rest of the general populace, so it’s kind of my specialty.”

For those that follow Russo on social media, you will have recently noticed his niche expertise in video form through the pun-based web series - ‘Rugby League Chic’.

Russo explained that the series came about due to his desire to upskill during the global restrictions of 2020.

“I was in the marketing department at Kayo, and when I lost my job because of Covid, I had a lot of spare time on my hands. So, one of the things I learnt how to do was to film things,” he explained.

“I did a cinematography course, and I already knew how to edit video, but I hadn’t done it a lot at my last job, as it was primarily writing.

“But a friend and I thought lets come up with a silly idea or something we can get together and do every week and practice our filming, and practice our presentation, and just have a bit of fun.

“It’s something I know that would appeal to some of the people that follow me because I have pretty niche interests and people with niche interests follow me, so I thought the best way to do that was to create little web shows discussing the different intricate points of a jersey and stuff that people may not have necessarily noticed unless they were jersey obsessive.”

Now, if you are like me, you are probably ready to max out both your credit card and your wardrobe space.

However, Russo has some wise words for those that are looking to start adding some on-field flare to their day-to-day outfits.

“Be very patient and be prepared to pay a lot of money,” Russo said through chuckles.

“Unfortunately, the way the jersey market is going at the moment, it is starting to replicate the football shirt market in England in the sense that people are starting to pay an absolute premium for old shirts.

“My advice to people is to be vigilant and the best places to look are eBay, Gumtree and Facebook marketplace. Always look there. Look regularly. Because you are going to see some outrageous prices that some people are going to be prepared to pay, but occasionally, you will see something where the price is decent, and if that is the case, jump on it.”

The avid gatherer also explained that like the brick-and-mortar market, things had recently begun to get a bit out of hand.

“To be perfectly honest, I compare it to housing. It just seems like there is now a shorter supply and people are willing to pay more money,” Russo said.

“While I love jerseys, I can see this is a hobby and is not something I am willing to sink hundreds of thousands of dollars into, because ultimately there are far more important things in my life than pieces of cloth.

“I think my whole mentality now is that I get a lot of immense satisfaction out of buying things that are at a really good price. So, it’s more about the bargain hunt than the actual purchase.”

With the knowledge that his collection would never be complete, I had to ask Russo about his ‘white whale’ – the jersey that had thus far eluded him.

“If I could have a wish and get any jersey I want, I would probably want a 1985 Balmain jersey made by Canterbury of New Zealand and sponsored by Saxonvale wines,” he answered emphatically.

So, if you happen to have one in mothballs in the attic, get in contact with Steven, as he has a clothes hangar waiting.

You can also read more about his boundless knowledge of the game's greatest era at his blog - 'The Wrap-Around'.