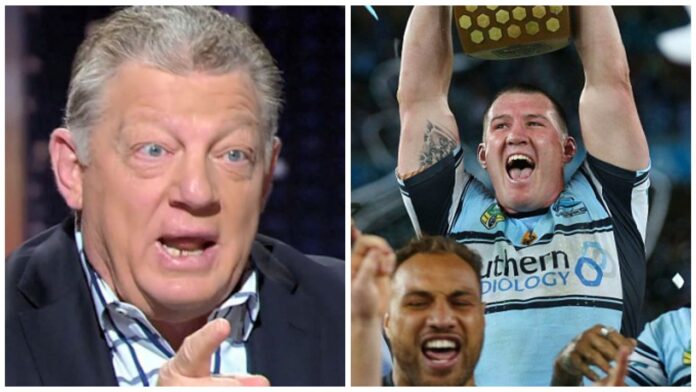 Paul Gallen and Phil Gould have come to blows after Gould drew comparisons between the 2021 NRL season, which he called the "softest comp" he had seen, and Cronulla's 2016 Premiership win.

Speaking on Channel Nine's 100% Footy, Gould was questioned on the season so far, which has seen Melbourne Storm reach an equal best 19-straight wins and the competition having a league wide average winning margin of 19-points (as of Round 16) - significantly higher than previous seasons.

Gould put this down to the strength of the competition, making reference to his previous comments on Gallen's Cronulla side.

"I said unless they improve [that] year they won't be going back-to-back and they'd struggle to make the finals because [the previous] year there was a soft element to that competition - and there was - there was only two or three teams that could win it, which is the same as this year," Gould said.

"This year is the softest comp I've ever seen in my life."

Gallen rebuffed Gould's claims, putting the new records down to individual talent and a new interpretation of rules, while also conceding that a lack of lower-grade preparation in recent years has left a distinct gap in first-grade talent.

"Some incredible records - individual and team records. I doubt we'll see the likes of this again," Gallen said.

"Obviously the difference in talent between a number of teams, the new interpretation of the rules and the way defence went in the middle part of the season to accommodate that. It opened it up for the more talented teams to run roughshod over the rest of them.

"The fact that over the last few years we've had very little lower-grade football preparing youngsters for first grade and their first tilt at it - they've really struggled with that. And I've got no doubt that across the game we have a lack of NRL credentialed talent.

"We've got plenty of fellas that will be in time but they're getting very tough initiation.

"The top sides at the moment have a lot of players that have spent a lot of time playing together. When you look through a lot of other clubs, they haven't had that. Time played together is a big factor in all of this and the way the rules so much favour the attack."

Cronulla finished third on the ladder in 2016, beating minor premiers Melbourne 14-12 in the Grand Final.

At the conclusion of the home and away season, the Storm had a points differential of +261, as of Round 23 in 2021, the first placed Storm are currently +487.