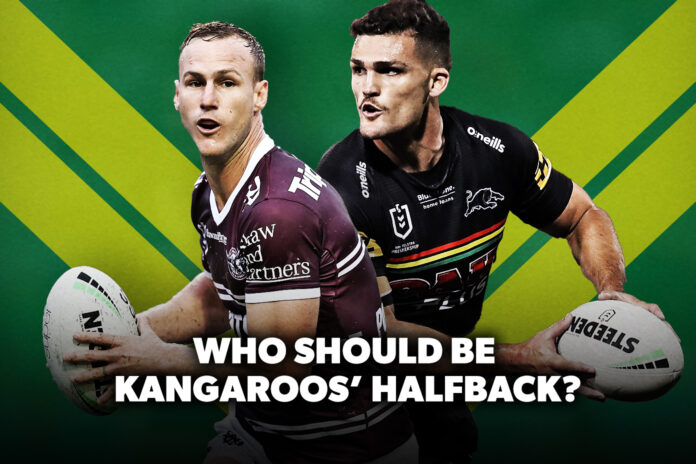 Following the announcement from Brian To’o that he wanted to play for Samoa at the Rugby League World Cup, we were once again thrust into the debate about the purpose of State of Origin.

In case you’d forgotten – it’s supposed to be a Kangaroos trial.

Yet after the series was completed with a thrilling decider that showcased the merits of both players, the majority suggests Nathan Cleary should be Kangaroos halfback over victorious captain Daly Cherry-Evans.

If State of Origin truly is the deciding factor in the Kangaroos debate, as so many traditionalists have claimed this week, it feels like a rushed conclusion. So we’ve decided to take a look at both candidates and what we’ve learned from another incredible interstate series.

The highs and lows

The old saying goes that you judge how effective an athlete is by measuring the distance between their best and worst performances. Though statistics often fail to tell the whole story, they’re a good place to start.

Cleary’s performance in Game 2 in Perth was the standout of the series. Finishing with a total of 24 points, he scored two tries, set up two more, ran for over 100 metres and dominated from start to finish. He was well-supported by a team largely filled with Panthers teammates and they ran downhill towards the finish line in the second half.

But it should be remembered that the Maroons were in front until Felise Kaufusi was sin-binned in the 38th minute. After capitalising on the numerical advantage – as good teams do – the Blues ran away with it as Queensland tried desperately to find a way back into the contest.

Game 2 was unique. A more open style was created by the numerical advantage and then maintained as the Blues built momentum and the Maroons flailed. They were never afforded a chance to get back to the tense back-and-forth they thrive upon. Everything worked exactly as it should have for the Blues – a rare occurrence in State of Origin.

These are, respectfully, the kind of games the Kangaroos might anticipate against the likes of Scotland and Italy, but as the quality of opponents increases in the knockout rounds, a failure to manage big moments in games played in tense circumstances could prove costly.

Things were starkly different in Game 3.

A tight contest where approaches had to be adjusted immediately to deal with the brutal opening minutes put a lot more onus on leadership, game management and improvisational ability. Other than scoring output, Cleary’s numbers were actually comparable to his Game 2 efforts.

While he was let down by a couple of mind-boggling errors coming out of their own end, this is where playmakers typically step up and make plays. Yes, the Blues had their backs to the wall for much of the second half, but it was a test that went unmet.

Cherry-Evans’ Game 2 output was easily his worst, with just four tackle-breaks and five runs for 26 metres. Though he couldn’t lead a revival he certainly passed the defensive test, making 24 tackles with 96% accuracy (Cleary never went higher than 83% in the series).

But in Game 3 DCE reminded everyone of his value in tough contests. As the Blues tried to peg Queensland down in their own half, Cherry-Evans and his cohorts minimised risk by tightening up their expansive play, prioritising field position and launching some massive kicks that found the turf under immense pressure.

They forced the Blues to turn around and chase the game from their own end, which ultimately paid off as NSW lost their cool and desperate errors crept in.

His total of 642 kicking metres was a series high and one of the determining factors in the outcome. Throughout the critical moments of the series, you got a sense that DCE played what was in front of him whereas Cleary played more to a plan.

Though Cherry-Evans couldn’t get anything to stick in Game 2, in Game 3 Cleary seemed unable to create any spontaneous individual brilliance that could have got the Blues out of trouble.

A part of the system

A lot of criticism hauled at Cleary in the aftermath of the decider branded him a ‘system player’, devoid of that game-breaking individual ability unless it arrives tactically and through his fellow Penrith players (did those people watch Game 2?).

The Panthers were deservedly rewarded for their NRL success with the largest representative contingent in the series. With six of his NRL teammates including his halves partner in the Blues side (as well as Matt Burton who was integral to their attack last year), it would have made little sense for Brad Fittler to overhaul Cleary and the team’s style and mentality.

The Panthers have only lost three games in the past calendar year. Three games. While that’s an amazing stat that deserves the rewards they received, it can create a problem when things don’t work.  Suddenly you’re facing unfamiliar adversity at the highest level and you’re not in club-land anymore. Without that rusted-on structure and style, problems can appear.

There’s also the strange issue of politics when selecting a large contingent from the same club.

While Burton was welcomed with open arms due to his role in the premiership campaign and move to a non-threatening opponent, Reagan Campbell-Gillard was reportedly frozen out by the Penrith group in Blues camp as a result of his move to rivals Parramatta in 2020. Following the Game 1 loss, RCG was cast out of the squad despite being arguably one of their best in the series opener.

Should he make it to the Kangaroos for the World Cup, Cleary would be without To’o, Api Koroisau, Jarome Luai and possibly even Liam Martin and Isaah Yeo – and some of these connections go all the way back to the NYC competition.

It’s not unfair to say that Cleary is untested without his long-standing and incredibly successful supporting cast, and that’s important. While he certainly appears up to the test, he hasn’t yet had to opportunity to demonstrate it, which is a risk in a tournament setting.

Cherry-Evans is at the other end of the spectrum – the lone Manly representative north of the border.

Club form isn’t even worth comparing. While the Sea Eagles are regularly in the finals hunt, they’ve lost more games in the past two months than the Panthers have in the past 12.

But his key support staff in the spine – Kalyn Ponga and Ben Hunt – were in the same situation, with no Dragons and just one other Knight to speak of in Maroons camp, and both clubs struggling for consistency at NRL level.

This forces the creation of new relationships on and off the field, free from politics or pre-existing tension, a clean slate that coach Billy Slater was able to thrust some excellent strategy upon which catered to each of his playmakers’ individual abilities with an overall view to maximising everybody’s strengths.

While Cleary wasn’t lacking in his command, it was a role he seemed to share with other members of the Blues spine as things intensified in Game 3. Meanwhile, whether he was shouting at his teammates or the referee, it was clear that Cherry-Evans was leading the Queensland charge.

Of course, that’s to be expected when DCE was the captain and Cleary wasn’t. And it’s certainly not fair to lay blame for the Blues’ defeat solely at Cleary’s feet when so much went wrong for Fittler’s team in that second half at Suncorp.

But who should be Kangaroos halfback?

There is no doubt that Cleary is one of the game’s premier playmakers. A premiership-winner, an Origin series winner, he’s earned respect and admiration everywhere but Queensland judging by the crowd’s response. He will play for Australia one day, without a doubt.

He’s also nine years younger than Cherry-Evans. That’s not a determining factor, but it underlines the reality that Cleary still has a lot more development and growth ahead (which should be a terrifying prospect to everyone but Panthers fans).

There hasn’t been a Kangaroos Test in three years, true. But if Origin is to be believed as a true audition for a place in Mal Meninga’s Kangaroos squad, DCE deserves to be the favourite.

In both of Queensland’s series wins over the past three Origin campaigns – and all three should be considered in the shaping of this Test team – they’ve had to do it the hard way, with constantly changing sides and some rag-tag assortments in each decider.

They’ve been regularly written off on paper, and deservedly so at times. But when looking at the constants and the mysterious reason they keep silencing the critics and delivering in the biggest moments – Cherry-Evans is always there.

Yes, Cleary has been scapegoated – often unfairly – as is natural for a young playmaker lauded as the next big thing. It’s also true the Maroons have escaped a lot of that since they became the underdogs in the new Origin era.

But if Origin truly is a trial for the Kangaroos team, the Queenslander deserves to be there.