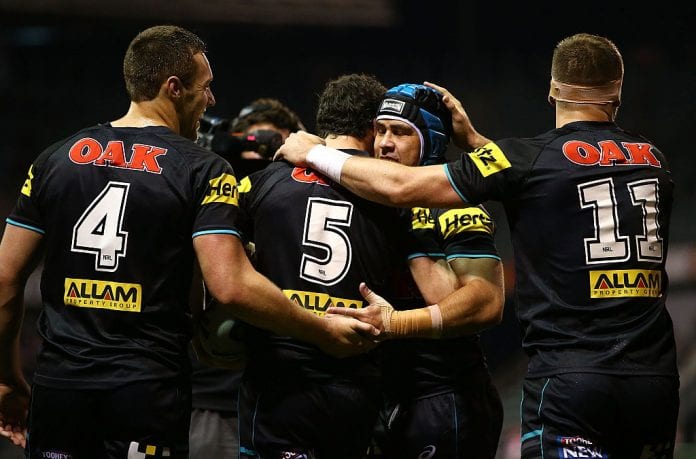 After finishing just one game short of a Grand Final in 2014, the Panthers suffered a horror 2015 in terms of injury and results.

After losing Brent Kite and Jamaal Idris to retirement and an extended break from the game, the Panthers have recruited well in Merrin and Hiku.

Surely the Panthers bad luck with injuries is in the past. Matt Moylan, Jamie Soward, Peter Wallace and James Segeyaro form a more than decent spine, but they spent barely any time together in 2015.

With a near fully fit squad, the Panthers will look to not only improve on 2015 but make a real run at the finals.

The extremely talented Moylan is most likely to resume his role at fullback although he may move into the halves depending how Soward and Wallace travel.

He only managed 11 games in 2015 and the Panthers really suffered as a result, missing the spark in attack that he provides.

11 try assists in 11 games really showcases his importance to the Panthers attack, especially with both Soward and Wallace under supposed pressure.

He’s been missing since round 12 so there shouldn’t be too much pressure on him too soon as he returns from injury, but at his best, Moylan is amongst the best attacking fullbacks in the game.

21 year-old Bryce Cartwright is already firmly on the Origin radar after a debut season to remember in 2015.

Playing 22 games in 2015, scoring five tries, with two try assists and seven line-breaks, he will be a much better player in 2016 for the season under his belt.

There was a month-or-so period in the middle of the season where Cartwright was one of the form players of the competition.

He’s an excitement machine and doesn’t mind getting his hands dirty in defence or tucking the ball under his arm and looking for metres. That’s a good blueprint for a modern day forward.

Trent Merrin’s name surprisingly hasn’t come up in a lot of people’s top few signings list, but make no mistake, this is a marquee signing for the Panthers.

Merrin brings Origin and test experience to a squad of young forwards, as well as genuine utility value.

He may play in the second row, front row, at lock or a mixture of all three. With McKendry and RCG up front I expect Merrin to play big minutes in the number 13.

With Cartwright and Peachy able to provide the spark, Merrin can focus on what he does best, making metres. His ability to land on his stomach and rise quickly will create space for James Segeyaro.

Weakness: Uncertainty in the halves

Both Jamie Soward and Peter Wallace are former Origin players with fair reputations. Unfortunately both are coming off fairly terrible 2015 seasons.

Neither had a good run with injury however even when they were on the park they were well below their best, especially considering how well they played together in 2014.

My thinking is that should either man struggle early in the season, Matt Moylan will be rushed into the halves.

With Will Smith and Moylan on deck, I don’t know how long the Panthers will persist with Soward and Wallace should they not start with a big improvement on 2015.

Strength: Try scoring ability from anywhere on the park

This is one of those few sides who present a threat regardless where they are on the park. Cartwright and Peachy can push a magic pass from anywhere while Mansour and DWZ are line-breaking machines.

Throw in Whare, Hiku, Segeyaro and two halves with Origin experience and you have a full arsenal of weaponry available.

Then you have the linchpin Matt Moylan who managed a try assist per game during his 11 games in 2015, an incredible stat for a fullback.

They may have their troubles defensively in 2016 but, if fully fit, I don’t see the Panthers struggling to score points.

The Panthers have the talent across the park to give the top eight a real shake, however unfortunately their star players have all earned reputations for being injury prone.

Soward and Wallace worry me in the halves although I’d be happy to be wrong as both players, on their days, produce some very entertaining football.

Mansour will have a full pre-season under his belt and will surely chomping at the bit to get back toward the top end of the try-scoring chart.

On paper the Panthers look the goods, but there is too much guess work to confidently predict a top half finish for the Panthers. How will Moylan return from injury? Will Segeyaro be able to revert back to 80 minutes regularly? How will the halves fare? Will they be able to avoid their recent injury curse?

Roosters looking to lock away star forward on cheaper deal amid...