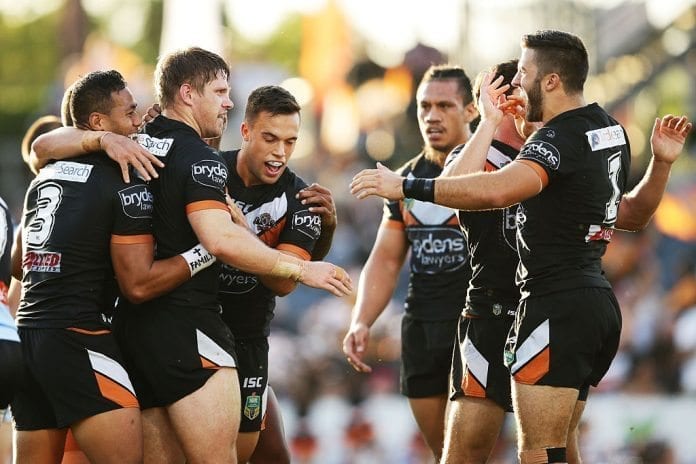 2016 will probably be looked back upon fondly by Tigers fans as it was a year where a lot happened for the club going forward.

Unfortunately, Robbie Farah, perhaps the greatest player to ever don the Wests Tigers jersey, was forced out of the club, but that may prove to be a blessing in disguise for all parties.

Tedesco and Woods, the Tigers two biggest stars, continued to burn bright, and are sure-fire club Immortals if they continue to ply their trade at the joint-venture club.

The biggest plus came in the form of the development and improvement of Mitch Moses, who went from a young player with undoubted potential, to a player who looks ready for the big time.

Given the years the club has invested in the Brooks/Moses partnership, this would be music to the ears of the Tigers faithful.

Mitch Moses and Aaron Woods can lay genuine claims to be the Tigers best last season, however, no one player is more important to his side’s fortunes than James Tedesco who was once again amazing in 2016.

Making his debut for NSW capped off a brilliant season by the Tigers custodian who is genuinely one of the world class superstars of the game.

In his 17 games, he scored 14 tries, made 15 line breaks and laid on 12 try assists. Those numbers are absolutely ridiculous considering his side didn’t venture deep into the finals.

Throw in 130 metres a game, seemingly five tackle breaks a run and the odd try-saving tackle and Tedesco may be in the top five-or-so players in the competition.

Season highlight: 26-16 victory over the Cowboys in round 22

The Tigers put in some amazing performances last season but their best probably came in front of a big and vocal Leichhardt Oval crowd in round 22.

With their season practically on the line, the Tigers were guided to victory by Mitch Moses, who had a hand in almost everything.

Most memorable of all though will be the try James Tedesco scored in the final minute after beating 30 or so tackles. Of course this is hyperbole but go back and watch the try, I lost count after the fifth tackle break.

Amazingly this was the fifth loss inflicted on Johnathan Thurston from five games at the venue.

On the surface, the Tigers signing of Idris is a gamble given that he has spent so long away from the game after walking away from it during his tenure at the Panthers. That being said, given Idris pedigree, it’s a gamble well worth taking.

The former representative player has spent 12+ months out of the game for personal reasons and is ready to return and resume a career that at one point had limitless potential.

His signing will provide a massive body out wide, and while his comeback will take time, if he can rediscover anywhere near his best form, it could prove to be an absolute masterstroke by the Tigers brass.

We have all seen what Idris can do for club and state, whether or not he can reach those heights again looks like it is up to him, however, all the feedback is good, and this could be a genuine feel good story in 2017.

No more Farah/Taylor power struggle: Robbie Farah’s switch to the Bunnies brought to a close one of rugby league’s most public and perhaps ridiculous feuds of the modern era. Farah is one of the first players picked for Origin yet was relegated to NSW Cup as he and coach Jason Taylor simply could not co-exist. I don’t know who was right, but in the end, Farah moving on was the best decision for all involved.
Halves re-signed: There looked a very real chance at one time as though one of, perhaps even both, of the young halves the Tigers had invested their long term futures in. Brooks looked like a Bulldog going forward, while Moses was linked with numerous clubs. In the end, much to the relief of the Tigers recruitment and coaching staff, both penned extensions.

Most clubs who missed the finals would consider their seasons on the lower end of the grading scale, however, all things considered the Tigers can be pretty happy with their 2016 season.

Tedesco continued his meteoric rise to superstardom producing stats that caused me to double take. Right now there are few betters players in the game.

Moses and Brooks, Moses especially, lifted to another level in 2016, and look like they may very well be the halves pairing that can lead the club back to premiership contention.

Some brilliant performances toward the end of the season presented the Tigers a chance to play for a finals appearance, however, ultimately they were blown off the park by the Raiders.

Their season probably deserved better, but the Raiders hammering showed that despite some very positive signs, they’re still a fair way away from being considered a top side.