Manly Sea Eagles centre Brad Parker will face a nervous wait for scans to be returned on a twisted knee, however, it could be positive news on other fronts with Tom Trbojevic a chance of joining Haumole Olakau'atu in returning to the side next week.

The 12-man Sea Eagles, who lost Karl Lawton to an early send off for a dangerous throw on Cameron Murray suffered their second straight loss against the South Sydney Rabbitohs in Gosford on Friday night, seeing the side slump to a four and four record to start the year.

Brad Parker became the club's latest injury problem during the clash, going off with a knee injury in the 49th minute.

Speaking at the post-match press conference, Des Hasler said Parker would need scans to ascertain the extent of the injury.

"He has twisted his knee, so we will have a scan on that and see how it comes up," Hasler said.

Replaced by Ben Trbojevic in the centres, Manly fielded a young and inexperienced centre duo for the second half, with Tolutau Koula having replaced Morgan Harper (who was dropped after a poor showing against the Sharks) on the other edge for the game.

Hasler hinted at the duo remaining in the positions however, saying he thought they did a good job, while Harper was only "waiting in the wings, while also suggesting Tom Trbojevic may return from injury alongside Haumole Olakau'atu, who is back from a one-week suspension for the Round 9 clash against the Wests Tigers. 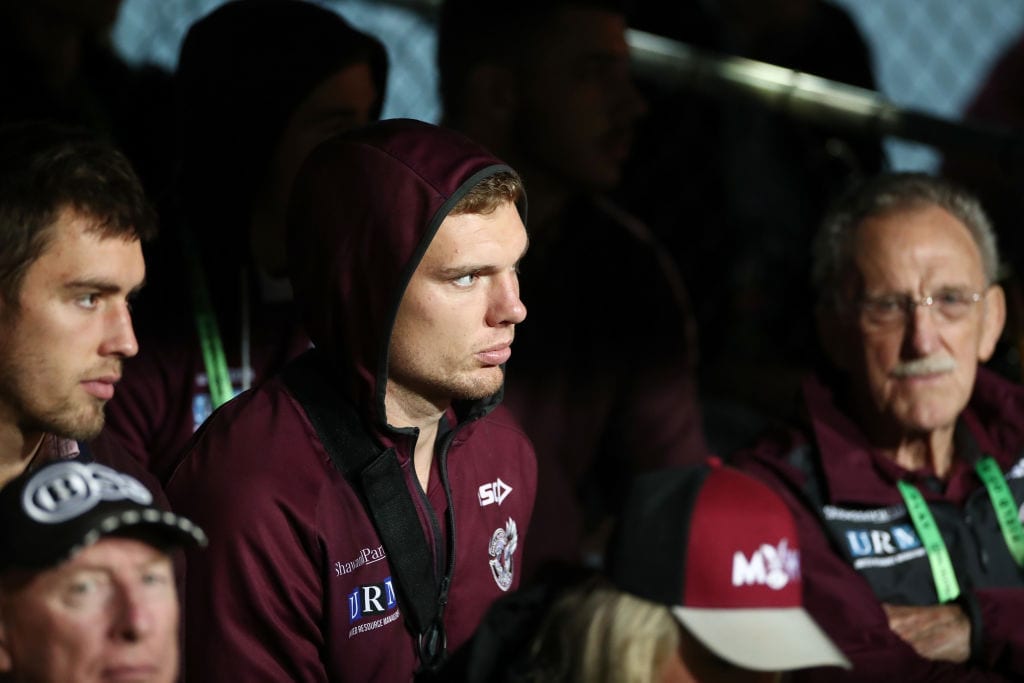 "I thought young Tolu (Tolutau Koula) and Benny Trbojevic when he came on did a good job. We have Morgan Harper in the wings as well, and we get a couple back next week.

"We definitely get Mole [Haumole Olakau'atu] back, and the possibility of Tommy [Tom Trbojevic] so there is some good news there."

Trbojevic has been missing for a number of weeks with an MCL injury which, at the time, he was able to play through.

The star fullback's return would create an intriguing selection headache for Hasler, with young guns Tolutau Koula and Christian Tuipulotu both pushing to keep their spot, while Jason Saab is also unlikely to be dropped, with Reuben Garrick's move back to the wing to accommodate Garrick likely to be one of next week's big team list talking points.

The Sea Eagles will clash with the Tigers in Round 9 at home, with kick-off scheduled for 3pm (AEST) on Saturday afternoon.

Dylan Brown pursued by over half the NRL for 2024