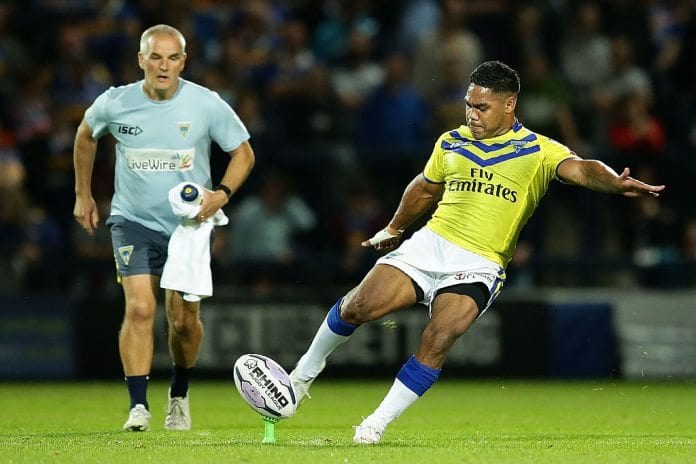 Chris Sandow has shocked the Warrington Wolves by deciding not to return to the club for the upcoming season, despite being contracted for 2017.

Sandow’s agent contacted the club to confirm he wouldn’t be suiting up for the first day of pre-season for the 2016 Runners Up, or any training session. Sandow’s shock exit begs the question – could the lively halfback be on his way back to the NRL?

Sandow hasn’t suited up in the NRL since the July of 2015, his early release from Parramatta an indication of the rocks and diamonds form he carried at the club. Sandow debuted back in 2008 with the South Sydney Rabbitohs, playing four seasons with the Redfern-based club, until his exit at the end of 2011 to sign a lucrative deal with Parramatta. His exit left a bitter taste in South Sydney owner Russell Crowe’s mouth, though it was short lived with his team returning to the finals the following season. Sandow’s deal with Parramatta - $2.2 million over four years – left a lot of questions regarding whether he was worth that much, having never guided a team to the finals.

Despite the big wraps he carried coming into the club, Sandow failed to live up to expectation, switching between the NRL and reserve grade on a constant basis. He failed to play a single finals game in his 159 NRL game career, leaving the competition mid-last year without too much protest. While his form at the backend of 2015 for Warrington was below average, a full pre-season saw Sandow improve immensely this season, nearly claiming the Man Of Steel award as he led his side to the grand final alongside five-eighth Kurt Gidley.

His surprising and sudden exit from the club leaves fans wondering if the plucky halfback could return to the NRL, and if so, where?

Melbourne Storm – Possible. Craig Bellamy has a history of turning player’s careers around and following the exit of Blake Green, it’s a definite possibility.

Canberra Raiders – Unlikely. Despite the exit of backup half Sam Williams, Ricky has already taken a big enough gamble by signing Dave Taylor to a train and trial contract. Plus Lachlan Croker remains as injury cover for halves Austin and Sezer.

Cronulla Sharks – Unlikely. Maloney and Townsend took the club to their maiden premiership in 2016, and have Samoan international Fa’amanu Brown waiting for a shot.

North Queensland Cowboys – Unlikely. Morgan and Thurston are incumbent Kangaroos, while the recent signing of Ben Hampton ensures they have depth.

Brisbane Broncos – Nope. Milford and Hunt, while a little off their game in 2016, are one of the premier young combinations of the competition, and with Benji Marshall and Kodi Nikorima at the club, Sandow won’t be.

Penrith Panthers – Doubtful. Te Maire Martin and Nathan Cleary will look to steer the club around in 2017, with Darren Nichols signing on as halves cover.

Canterbury-Bankstown Bulldogs – Likely. Halves Josh Reynolds and Moses Mbye have come under fire, and the signing of Sandow would see Mbye move to five-eighth, Reynolds to hooker and Lichaa to the bench.

Gold Coast Titans – Unlikely. Being a Queenslander, Sandow may desire to head back home. But with Kane Elgey, Ash Taylor and Tyrone Roberts already at the club, there’s simply no room for him.

Wests Tigers – Nope. Mitchell Moses and Luke Brooks are the long-term future for the club. While Sandow would be a handy back-up, the likes of Woods, Tedesco, Moses and Brooks are off contract at the end of 2017, meaning the Tigers need the money.

New Zealand Warriors – Nope. If Sandow is leaving England due to homesickness, it’s unlikely he’ll sign with New Zealand. Not to mention the club has Foran, Johnson and Lolohea at their disposal.

St George Illawarra Dragons – Likely. Benji Marshall’s exit leaves four-game rookie Drew Hutchison as their halfback for 2017, and Sandow’s spark could reignite what proved to be the second worst attack in the NRL in 2016. Makes sense.

South Sydney Rabbitohs – Unlikely. Cody Walker and Adam Reynolds look to have forged a quality combination, while Luke Kelly signs on as back-up for the club.

Manly Sea Eagles – 50/50. Blake Green and Daly Cherry-Evans are Manly’s definite halves for 2017, though they lack depth in the halves. But in the event of injury, Manly are more likely to put Dylan Walker back in the halves than sign Sandow.

Parramatta Eels – No chance. Fans aren’t likely to welcome Sandow back to the club, despite their current halves dilemma. His signing would be failed solution to an old problem.

Sydney Roosters – Nope. Luke Keary will partner Mitchell Pearce, with Connor Watson set to earn a bench spot. Ryan Matterson and Jackson Hastings are also at the club, while young gun Mitch Cornish has also signed with the club.

Newcastle Knights – Unlikely. While they lacked spark this season, Nathan Brown is likely to persist with Mullen and Hodkinson and has Holden Cup stars Brock Lamb and Jack Cogger at his disposal.