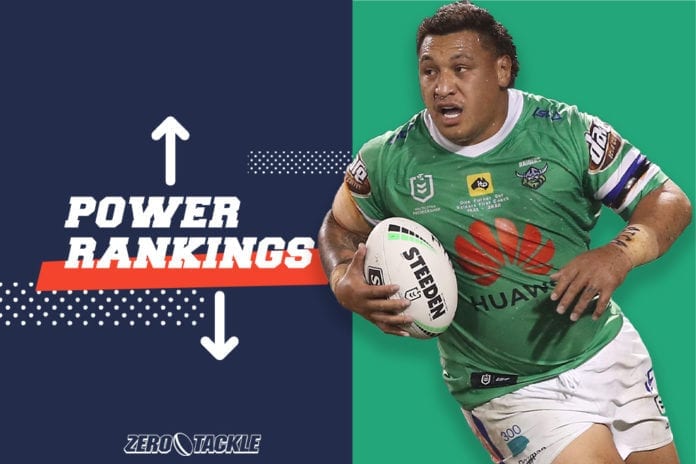 I missed watching this game live but at 10-0 with 20 minutes to go I tucked my phone away thinking Penrith were home. That Waqa Blake try turned the game and Parra were running downhill from there. The sign of a good side is when they can be largely outplayed yet still win. Parra are a good side, make no mistake! Ryan Matterson continues to go from strength to strength. How good was that RCG shot on his former teammate? Clint Gutherson is truly the king of Bank West. Usually re-watching games on delay is a chore but this was good fun.

Too soon to say that the Raiders are back? A week after dropping their first loss of the season they rebounded with a handy, yet albeit not overly dominant, victory over the Tigers. It took the Green Machine into the second half to cross the line, but two tries were enough given the goal line defence by the Raiders. They took advantage of a one man advantage and captured a win they needed. Not the game of the round but exactly what was needed in Ricky Stuart’s 400th game as coach.

Two weeks ago I joked that the Storm hadn’t yet worked out the new rules. Right now I not so jokingly say that they’ve well and truly adapted, and as usual it has been Cam Smith who has lead the way. He was out of this world on Saturday night in his side’s big win over the red hot Knights. Tino Faasuamaleau is a machine. Ryley Jacks looks the goods and has presented Bellamy with some real questions again in the halves. This was the Cam Smith show though.

Newcastle dropped their first game of the season to the Cam Smith inspired Storm but can still be very proud of their efforts. At 18-2 down at halftime the Knights of old would have folded and been put away but this side fought back. Ultimately they were outclassed but good signs. Andrew McCullough has been a rock since his arrival while Ponga, Best and Lee continue their good runs. Klemmer is returning to that enforcer role he made his own in recent years.

Oh o. I hear the calls of “it’s only the Bulldogs” but oh o! The Chooks are back. Three straight, big wins, have the Premiers breathing fire. James Tedesco put in one of the most dominant performances you’ll ever see on the back of three tries, two try assists, two line breaks, five line break assists and ten tackle breaks. Brett Morris also had an absolute blinder on the wing. Young Kyle Flanagan’s performances have grown some incredible plaudits since the re-start.

The Panthers, after 60 minutes, looked set to deliver the first loss to rivals the Eels, but alas it was not meant to be. James Fisher-Harris continued to lead the way, despite the big shot from RCG, while Nathan Cleary looked good upon his return to Rugby League. I think the Panthers announced themselves as genuine with this performance. They did miss almost double the tackles of their table-topping opponents but otherwise more than kept pace with the Eels.

Manly looked like they had taken last week’s late loss to the Eels in a bad way after falling 18-0 behind to the Broncos after 30 minutes. To their credit they were able to fight back and win it via a late penalty goal. Addin Fonua-Blake’s match high 254 metres was made even more impressive by an early injury to his front row partner leaving him to shoulder big workload. DCE was crafty, Turbo was electric and the forwards fought back. Typical Manly performance.

The Cowboys can thank a good start for saving them from falling further here on the back of their second straight loss. They did lose Valentine Holmes early to injury but to concede seven tries to the Warriors will have plenty frustrated up north. Kyle Feldt continued his brilliant try-scoring start to the year. The joke of never having to check a Feldt put down is becoming less and less of a joke each week. Josh McGuire was again huge up front although Taumalolo was kept quiet.

The Bunnies are back in the winners circle after a somewhat impressive win over the Titans. The competition points are all that matter here so forget the up and down performance. Cody Walker made a huge difference upon his return to the side. Latrell Mitchell looks better and better every weekend in the number one after having the ball on a string for 80 minutes. George Burgess was too hot to handle and bossed the middle. Good signs despite a few moments of negativity.

The Tigers were well on their way to recording an upset victory over the Raiders until two moments of madness from the returning Russel Packer completely changed this game. Leading 4-0 at the break, the Tigers were stingy in defence and were hanging with the Raiders pack. Unfortunately they conceded almost immediately after going a man down and could never wrestle back momentum. Adam Doueihi at fullback is a real joy to watch. Alex Twal is an absolutely machine in the middle.

The Warriors delivered the shock result of the week with a more than handy win over the fancied Cowboys on Friday evening. The 37-26 win came on the back of a Peta Hiku hattrick, which followed an awful error earlier on. Talk about a turnaround. RTS is back to his metre-making machine best and will surely be crossing the line before too long. Nodi Nikorima and Blake Green combined for five try assists between them. Good night for the halves.

Unfortunately the Bulldogs were brought back to reality with a red, white and blue thud on Monday Night. They were largely reduced to spectators as James Tedesco and co ran riot. That said Kieran Foran has continued his impressive return to the field and scored a brilliant try. Unfortunately they conceded nine line breaks and missed almost 40 tackles. The Dogs face a huge game against the Sharks this weekend that may define where they’re really at.

The Dragons have their illusive win over local rivals the Sharks and it came on the back of a host of changes. Matt Dufty was the star in the one, Ben Hunt was a monster in the 9 and Cam McInnes looked at home in the 13. James Graham had his best game in many months coming off the bench. They still had moments where it looked like they’d forgotten how to win but wracking up five tries was super impressive. Good win and something they can build on.

After last week’s horror show Broncos should be much prouder of their side this week, despite a narrow loss. Leading 18-0 after half an hour this was a huge case of a week making all the difference. All the Broncos stars stood up with Milford, Boyd and Haas looking like world beaters again. Unfortunately they were run down in the second half but no need to sink the boot this week. They have some serious cattle returning too.

The Sharks were, by far, the worst performers of the weekend, and that includes a side who copped 40 to the Roosters. There was no fight here in a badly beaten side who turned up expecting to win. Chad Townsend wouldn’t make the Jets side on merit while halves partner Shaun Johnson was average at best. Hiroti scored with his first touch but was otherwise well beaten. Toby Rudolf started the game like a man possessed and then sat on the bench for far too long. Season slipping away in the Shire.

The Titans had their moments against Souths on Saturday despite being pretty comprehensively beaten. The 32-12 scoreline may flatter Bunnies a little but the Titans were never in this either. Bryce Cartwright had an encouraging game. I really think the Titans need to stick with him. Phillip Sami was the other try scorer and looks at home in the one, although is more dangerous on the wing. Jai Arrow and Tyrone Peachey are due a big game.