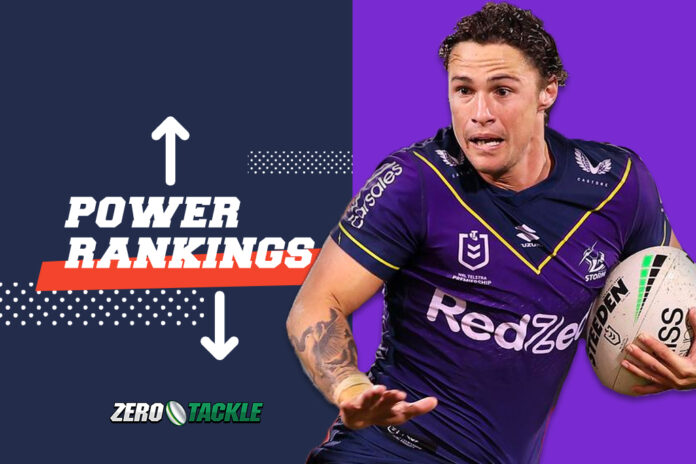 With only four games being played over this past week, the rankings below are more of a summation, with minimal movement found throughout.

It would be rough to penalise the Panthers for dropping one game whilst sans their Origin stars, so we won’t.

Yes, they were outplayed by the Tigers on Friday night but we all knew this would happen.

Matt Burton is rusty and Tyrone May isn’t up to first grade standard. If you take three members of a team’s spine out, as well as two of their forwards, and it’s always going to be tough.

The Panthers are still setting the standards ahead of Round 14.

The Storm, sans two million dollars worth of talent, held off a fast finishing Titans outfit to keep their Minor Premiership charge going.

It’s almost unfair how deep this Storm squad is. Nicho Hynes was again amongst the best in purple, capping off a huge week for the young star. Jahrome Hughes returned from injury and has not missed a beat. Brandon Smith is a special player who can do anything. Dale Finucane is one of the toughest men alive.

The Bunnies put their feet up over the weekend, and sit fourth as we hit the Origin period.

They suffered two humiliating losses within three weeks, however, when at full strength, they still look a tough team to beat.

With Wayne Bennett supposedly retiring at the end of the season, and Adam Reynolds heading north, there is big pressure on the red and green to deliver. If they get through the Origin period, then they could challenge to become the first team to concede 50, but still win a title.

The Eels were hugely impressive on Sunday afternoon in the Newcastle sun. They put their hosts away by six converted tries and it really could have been worse.

Clint Gutherson showed why he is next in line should there be any injuries in the Blues backline. Ryan Matterson also had a huge game and put his name back in lights. Maika Sivo looked unstoppable at times. It’s no coincidence that the Eels looked better upon Dylan Brown‘s return to the side.

The Roosters enter the Origin period just the one win outside of the top four, despite losing Luke Keary early on for the season.

Boyd Corner has also been unavailable while Jake Friend and Brett Morris have retired. James Tedesco has been everything you expect and then some. Sam Walker has been an absolute revelation despite his young age. JWH keeps reminding us just how good he is. Joseph Suaalii‘s career is off to quite the start.

The Cowboys have been 2021’s surprise packets with their results far exceeding expectations.

Valentine Holmes has turned up a different player after a dire 2020, and it’s almost as if QLD’s Origin success kickstarted his career. Scott Drinkwater has been brilliant in the halves. Jason Taumalolo has returned from injury and is looking more like his old self. Reece Robson is future star. Murray Taulagi looks a real find on the wing.

Early on, it looked as though Manly were going to battle to avoid the wooden spoon whilst now it looks as though they’re set for a top eight spot.

What’s the difference I hear you ask? Tommy Turbo. Plain and simple.

Since the superstar fullback has returned, the Sea Eagles have been a completely different outfit. Plenty of players have also found form to coincide with the return of the most influential player in the league.

The Tigers are the movers on the back of their huge, upset win over the Panthers on Friday night.

Yes, yes, the Panthers had half their side out due to Origin commitments, but the Tigers could only beat what was put in front of them, and beat them they did.

Luke Brooks continued his recent run of good form, but again, this was the Daine Laurie show. Luciano Leilua is making serious moves. Alex Twal is an absolute machine at prop and bossed the middle.

The Titans drop on the back of a six-point loss to the understrength Storm.

Despite the Storms’ depth being tested, the Gold Coasters themselves were without a host of Origin stars, with their three go-to forwards missing the contest.

Philip Sammi should have have four tries, but Brian Kelly flatly refused to pass despite clear passages to the try line. Greg Marzhew scored on debut and looks as though he’ll enjoy a brilliant career.

Jayden Campbell is going to be super fun to watch. What a debut!

The Sharks have endured a pretty horrible season to date, but the last fortnight have been incredible on and off the field.

Two straight wins, and the signing of Nicho Hynes, has them looking far more likely to challenge for a spot in the top 8.

Will Kennedy has been a standout star across 12 rounds, while Josh Hannay has made some long overdue decisions.

The Sharks look as though every decision is made with 2022 in mind, and it’s actually helped their ’21 fortunes also.

It’s a shame that this wasn’t a full round, because the Dragons deserve to rise here on the back of a brilliant win over the Broncos.

We’ll leave that for another day, but he was the player of the round after a near flawless performance. Ben Hunt dominated this game despite some curious decisions. Jack Bird looked great in the second row.

What a win for the Dragons.

The Warriors sit 9th after putting in a mixture of brilliant performances and awful performances.

RTS and Tohu Harris have been the stars yet again. Reece Walsh‘s mid-season signing has given the club a brilliant outlook and a tremendous future.

Considering this is their second season in a row away from their home ground – and to a degree family – to sit within striking distance of the eight is incredible.

I’m so glad RTS can have a proper send off in NZ.

The Knights season is in serious trouble after yet another awful loss in front of their own fans.

Yes, they were missing cattle through Origin ommisions and injury, but the big home crowd deserved much better.

Enari Tuala crossed in the 75th minute which was the only points Newcastle would score on the day. Connor Watson is routinely the Knights best yet isn’t used correctly at all.

This squad is far too reliant on Ponga.

The Raiders have, undoubtedly, been the let down across 2021.

A long-term injury to Charnze Nicoll-Klokstad certainly hasn’t helped, but the problems run far deeper than a fullback being unavailable.

They’ve lost their halfback to a release while Ricky Stuart seems more worried about press conference soundbites. Jack Wighton and Josh Papalii have been shells of their 2020 selves.

Let’s hope for a turnaround for the Green Machine.

Well … at least they had a close up seat to the Matt Dufty show.

The Broncos kept pace with the Dragons in the first half, but fell away in the second 40 and copped a horror loss.

Albert Kelly was the Bronc’s best player by an absolute mile. Jamayne Isaako made some unforgivable errors on the night and has handed over the number one jersey.

On the back of a serious recruitment drive, much was expected at the Bulldogs this season.

Unfortunately, they have won just the one game in 2021 – a horror game against the Sharks.

Nick Cotric has been shifted back to the wing, while Corey Allan‘s run at fullback did not pan out.Marquee signing Kyle Flanagan is nowhere to be seen after underperforming. Luke Thompson has been a monster.