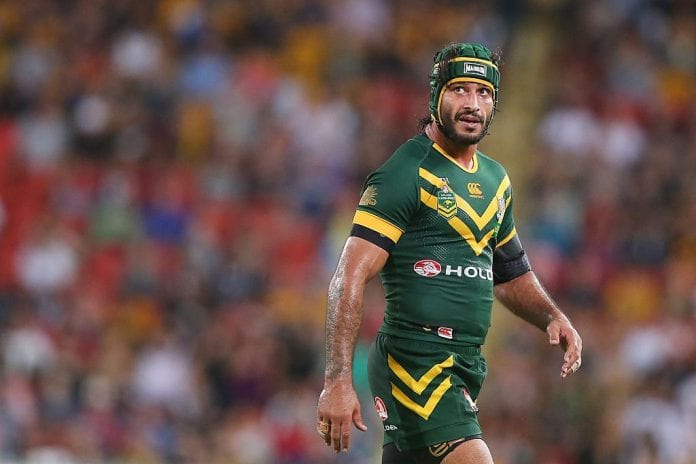 With all the talk of possible Origin selections, the upcoming Anzac test match between the Kangaroos and the Kiwis seems to be slightly overlooked.

The majority of the Kangaroos side picks itself, however reports seems to indicate there could be a selection surprise or two.

I’ve decided to take a slightly different look at the situation rather than just naming the 17 men I’d take into the clash.

Below is the 17 I expect to be selected, and also the player who should be chosen if it were selected purely on form. The player I believe will be selected is the first player named, while the player I would choose on form is in brackets.

As always, opinions are welcome as to who the form player is, who should be selected, and who you would select.

For the record I didn’t take too much notice of left and right hand centre and winger as the players likely to be chosen will play out of position anyways, and at this level players should be able to play either side of the field.

James Tedesco is one of the form players of the competition, even in a losing side, but he will likely be overlooked for the experience of Greg Inglis. Inglis, who isn’t having the best of seasons and looks like he may be playing injured, has all the experience in the world and won’t let anyone down. He’s pretty much an automatic selection in any side in the world and you’d be crazy to think otherwise. That being said, Tedesco’s day will come, and right now I’d go so far as to say he is the premier fullback in the game.

Straight up, I don’t believe Radradra should be available for selection, but he is, and as the best winger in the world earns his spot. On the other wing, Darius Boyd deserves selection. Boyd could arguably play fullback such has been his form, but if Inglis is picked, he earns a spot on the wing. Form wise, Corey Oates is having a pearler of a season thus far and will likely earn an Origin jersey in a few weeks-time. SKD and Jordan Rapana are the other form wingers, however are both New Zealanders. Boyd’s form warrants selection, even out of position.

Jennings and Radradra will form the left hand side while Josh Morris will likely partner Darius Boyd on the right. Jennings has been one of the form centres of the competition, and deserves his expected selection. Will Chambers injury has opened the door for Josh Morris, whose experience will probably see him edge out a debutant. Justin O’Neill is arguably the most underrated player on a brilliant Cowboys roster and has been quietly going about his business as usual. He’ll be battling with Dane Gagai for an Origin spot.

This is an automatic selection and cannot be argued. Cronk and Thurston have formed the most dominant representative halves pairing in modern time. That being said, I’d argue that Anthony Milford is the form half of the competition, with Thurston in at second. Milford beats out the likes of his club partner Hunt and Morgan, and even Cronk, in terms of performances thus far in 2016. Luckily for NSW he won’t represent QLD this year, however the Kiwis might not dodge that bullet, although any appearance would have to come from the bench.

An injury to Aaron Woods means the Cowboys bookends will be named as starting props, and you can’t begrudge either of them their starting spot. Both men are rep mainstays and still amongst the best in the business. On form though, no one is burning brighter than Roosters young gun Dylan Napa. He won’t play Origin, but I’d find a spot for him in this side without a doubt. Fifita has been a man mountain in the Shire for the Sharks after reeling in the mistakes and penalties and has earned the right to be in the reckoning for a return to rep duties.

I expect the Cowboys connection to see Cooper selected on the run on side, where he will be partnered by hitman Beau Scott. This may change as the players I’ve named on the bench can easily be swapped, however this is who I believe will start. Scott and Cooper are two of the form back rowers although I’d place Cooper’s fellow Cowboy Ethan Lowe slightly ahead in terms of form. Cooper is yet to play for Australia however I don’t think an international cap is too far off. Scott is amongst the rep mainstays and is having a brilliant start to 2016.

I don’t think Gallen will be overlooked despite talk that he hasn’t been contacted by Mal Meninga yet. He is the premier lock in the modern game and has led the way at both an Origin and international level for years. Although he has been brilliant for the Sharks since his return, I’d say Parker is the form Aussie number 13 right now. For the record Taumalolo is probably the main man in terms of impact, although Parker offers more over the journey. Both men are workhorses capable of busting a game open with an offload. Either/or, you won’t lose anything either way, and both will be there regardless of which position they’re named in.

There is absolutely no chance in the world that Smith doesn’t get selected if fit, but Michael Ennis is arguably the form Australian hooker in the competition right now. He sits second on the Dally M leader board and has led the line for the Sharks during their impressive run. Smith, although he has yet to set the world on fire, has been brilliant also, and will be the first player picked once again.

This will be tough to explain, but Thaiday, Parker, and Merrin will be in this side somewhere, whether it be from the bench or in the run on side. I believe Milford will be selected as the impact player, which Meninga likes to employ. I haven’t named Milford here and I believe he is the form half and thus was named in the run on side. Due to Milford being named there, Josh Dugan has shown the best form of players capable of filling in this utility position. Merrin deserves a spot here also after a brilliant start to his Panthers career. Josh McGuire has been brilliant off the bench at Brisbane as has Paul Vaughan in the nation’s capital. Both are genuine impact players and wouldn’t look out of position. Both will likely play Origin but miss out here.