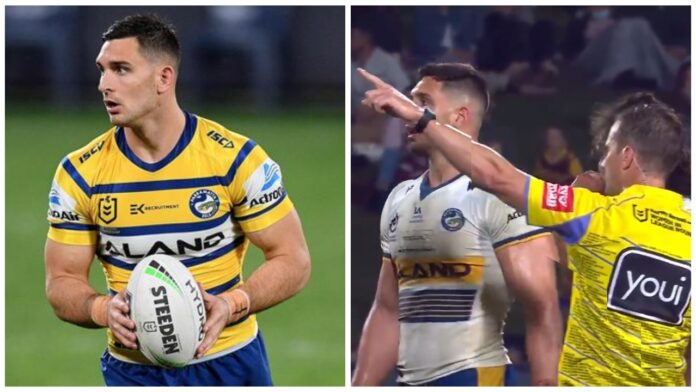 Parramatta forward Ryan Matterson's season could well be over after he was sent from the field after a woefully misjudged head high hit on Manly's Brad Parker.

The collision between the 26-year-old Eel and the 24-year-old Eagle came in the 63rd minute of the pair of Sydney based clubs Round 22 clash and arose after Parker was fed the ball on 4th tackle of a set.

Footage of the incident showed Parker being routinely wrapped by a duo of Eels on his defensive 30 metre line before Matterson charged through and collected the young back with the point of his shoulder.

After minimal deliberation and the cameras panning across the concussed redhead, Matterson was given his marching orders.

Matterson has been hit with a Grade 3 careless high tackle. The second-rower's charge carries a base penalty of 300 points, however, with two prior offences in the last two years, that figure is elevated to 382.

He will receive a three week ban if he takes the early guilty plea, leaving him unable to return before Week 1 of the finals, or a five-week ban if he fights the charge at the judiciary and loses.

On Channel Nine's coverage of the 'contest', Rugby League immortal Andrew 'Joey' Johns suggested Matterson's feet hadn't helped his cause when opting to hit and that referee Grant Atkins had made the correct decision in expelling the former Rooster and Tiger

"He [Matterson] gets his feet in a really awkward position," Johns said in commentary.

"That's a send-off. The one you compare it with Corey Harawira-Naera and if anything, that probably looked worse.

"He [Parker] was out before he even hit the ground. That was ugly."

“That’s a real bad one from Matterson. Poor Parker."

The Greenacre product became the first player wearing a blue and gold jersey to be sent from the field since Fuifui Moimoi 15-years ago.

Ironically, the dual international's marching orders also came in a match-up against Manly.

With the scoreboard reading 32-4 in the Northern Beaches boy's favour at the time of the collision, it was clear to anyone that had tuned into the fixture that Matterson's high shot came at a stage of the game when his side were too.

And now that he is set to face a lengthy stint on the sidelines, has Parramatta's season gone with it?

With his key forward absent from the remaining 17-mintues of the one-sided rout, Brad Arthur's Eels fielded next to no resistance and allowed Des Hasler's clinical offence to keep the scorers busy with another 24-points.

Speaking after the 56-10 loss that saw his side slide outside of the competition's top-four, Arthur claimed that the clash played in front of a healthy crowd at Sunshine Coast Stadium was akin to Murphy's Law in that everything that could go wrong, did go wrong.

“It wasn’t a great start. It all just snowballed out of control.

“I thought we were jumpy and making decisions when we didn’t need to, we weren’t calm.

“We didn’t want to stand back and get played on by Tom [Manly superstar, Tom Trbojevic], but we didn’t need to try and solve things on our own."

When asked what the plan of attack for a turnaround this late in the season would be, the head coach suggested that alternative measures may be sought to remove themselves from the quicksand.

“I probably need to change things up at training, that’s a start," Arthur continued.

“Maybe we don’t focus on footy this week. We’ve got a week to sort it out.

“We need to mix something up because sometimes the harder you work the deeper the hole you dig yourselves into.”

The club's fourth defeat in succession came mere days after Arthur suggested that negative speculation over his tenure at Bankwest was unfair.

At the time of writing, no official charge has been handed to Matterson.