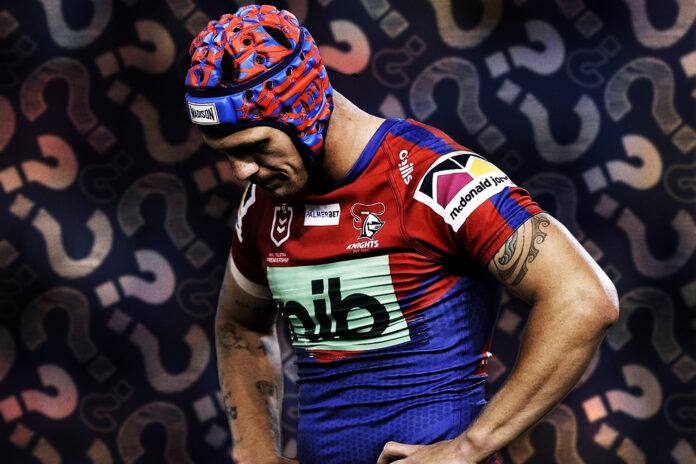 Rugby league players are as much rockstars as they are athletes in Newcastle, fuelling the dangerous cocktail that is the Knights' modern day playing group.

And if a rugby league player is a rockstar in 'Newy', then Andrew Johns is Mick Jagger.

Cooler than cool, 'Joey' Johns embodied the spirt of Newcastle to a tee, his love of a party matched only by his love of winning, something Novocastrians took solace in.

They celebrated Joey like he was the king of the Hunter region. Even now, 15 years after his retirement, petitions continue to circulate over a proposed bronze statue of the halfback, to sit plum out the front of McDonald Jones Stadium, commemorating the career of a Newcastle legend.

But if Andrew Johns is Mick Jagger, then Kalyn Ponga is Justin Bieber.

He may be talented, he may be celebrated by his generation, but he'll never reach the highs of Jagger, he'll never possess that cutthroat edge.

Now, as Joey did two decades ago, Ponga is the new king of the Hunter, hailed as the biggest celebrity in Newcastle, and in that lies the Knights' biggest culture shock.

Newcastle could get beat by 50 at their home ground by a rival, and if Kalyn stepped foot into King Street Hotel that night, everyone would drop what they're doing just to get a picture with him, just to have a conversation with him or be seen.

Win or lose, there is a queue of women waiting to talk to him, men who just want to speak to the star of their favourite football side, and be able to tell their friends 'I saw Kalyn Ponga last night'.

If a slew of locals are ready to worship the ground you walk in after a heavy defeat, then why would you strive to win?

Within hours of the Knights 15th loss of the season up in Brisbane, Ponga and team mate Kurt Mann were busted leaving a cubicle together at the Hotel Delany in Newcastle, during a time where the fullback has been ruled out for the season with concussion symptoms.

The following day Bradman Best and Enari Tuala were dropped after missing the team bus by six minutes.

There is a fine line in rugby league that players tread constantly, between 'having a life outside football' and 'setting a bad example for onlookers'.

You cannot criticise a player for not making football their life, at the end of the day it is their job, and like all of us, sometimes they need an escape.

You can criticise a player for simply not caring about whether they win or lose, and that is the way things are starting to head in Newcastle.

The stars are being paid regardless of whether they win or lose, hailed as celebrities despite their effort levels or ladder spot. Once you stop caring about what those outside your bubble think of you, suddenly it's harder to find motivation to do well.

You only need to take one look at the local crowds between 2015 and 2017 to see just how special this club is to its fans.

They claimed three consecutive wooden spoons, a dismal few seasons for the club, and yet the hill at McDonald Jones Stadium was always packed. There was never a day, rain, hail or shine, that the fans gave up on the club.

Frustrated yes, optimistic, but never did they throw in the towel.

It didn't take a diehard fan to see the roster during those seasons was stretched thin, and despite being anchored to 16th on the ladder, their team was at having a go, and that's what has always resonated with the rugby league fans of Newcastle.

And that's why frustrations have never been so high.

The current roster is ten times better than that of 2016, yet the effort level is at such a fraction, the club has lost its culture and the yet fans continue to grovel at their feet, like they'd just bumped into Michael Jordan in 1996.

Gone are the days of poster boys like Paul Harragon, Danny Buderus, Ben Kennedy and the Johns brothers. Sure, they loved a party, but they earned it.

Like modern day, they would've been worshipped in the public even after a big loss, but do you think they wanted to hit the town after being touched up 50-0? Did they want to show their faces?

As long as supporters continue to put these players on a pedestal, their attitude will never waiver.

There's few easier ways to summate the playing roster without this nifty stat - five players have been handed club-imposed bans in the last three weeks for the way they have handled themselves.

That's sailing close to 20% of your Top 30 roster, disciplined for their actions away from the game, or without the ball in hand.

Ponga and Mann in the cubicle, Best and Tuala showing up late, and not to mention Dave Klemmer's on-field blow-up at trainer Hayden Knowles landing him a week on the sidelines.

It's hard not to bring it all back to Ponga though.

Kalyn is the club captain, the recent recipient of a multi-million dollar five-year deal, and it's becoming painfully obvious what a mistake that deal is becoming.

There's no doubting his talent, the Origin decider five weeks ago showed that, it's his commitment that must worry fans.

He isn't the guy you see filthy after a tight loss. He isn't the one barking orders at his players when a game is on the line.

He's Mr Cool, Mr nonchalant, and while he's skilful, he's marketable, is he the man you'd want to follow into battle?

His father Andre leapt to his defence, claiming his son was sick after celebrating a recent house purchase and Mann was simply helping him.

Only for the Hotel Delaney staff to confirm neither player was deemed intoxicated, and were only at the venue for an estimated 25 minutes.

Rugby league seems nothing but a high-paying job to fund Ponga's lifestyle away from the game. It's fair enough, it's a job, but you want more than that from your captain.

You want them to hurt after a loss, you want them striving to be better, in order to make those around him better.

Instead, he's expected to avoid all sanctions after his cubicle debacle, retain his captaincy, and brush this off like it's just another week.

At this point, Knights officials may as well kiss his forehead and tuck him into bed at night.

No matter how dire things get in the Hunter, at least they've got a coach that's been to four Grand Finals.

Adam O'Brien's doubters have only grown this season, the first time in his three-year head coaching career that he'll miss the top eight.

While his record in that regard is good, even despite the club still having not won a final since 2013, the questions over him coaching the club extend beyond his spot on the ladder.

Some call it silly, made up, but there is just something about a 'club's DNA' that rings true for certain teams.

Some sides like the Titans or a Wests Tigers mustn't have that rich, engrained history, but teams like Manly, Canterbury, Newcastle, they do. They flourish under coaches who understand the team themselves, and their brand of football.

In the same vein that someone like a Des Hasler understands Manly, Newcastle need someone that understands this town.

Matty Johns would be perfect with his background and his immense rugby league foresight, however it's hard to see him walking away from his media commitments to do so. Danny Buderus had half-a-dozen games at the helm in 2015, but it's uncertain if he's still interested.

It's way too easy to sit here and say the obligatory 'the only way is up' or 'the players just need to get on the same page'.

The issues run much, much deeper.

If fans stopped turning up for their side when they weren't performing, would that be enough a kick in the backside to wake up the senior players at the wheel and start steering this team?

You can't take social lives from players, but you can't have them gallivanting about like they don't care about results either.

If the team you support is forking out over a million dollars a year for one player, you don't just want them to perform, you want them to care. You want them to try their hardest, and encourage others to follow that example.

The Newcastle Knights are a rudderless ship, lost at sea, waiting for a senior player of coach to take the wheel and deliver them to dry land.

There is no rescue team on the way, the Knights are their own worst enemy, but they can be their own saviour as well.

It starts with captain Kalyn, it starts with team mates and fans holding each other accountable, and while these so-called rockstars are allowed to come and go as they please, there will always be a flock of groupies in trail.