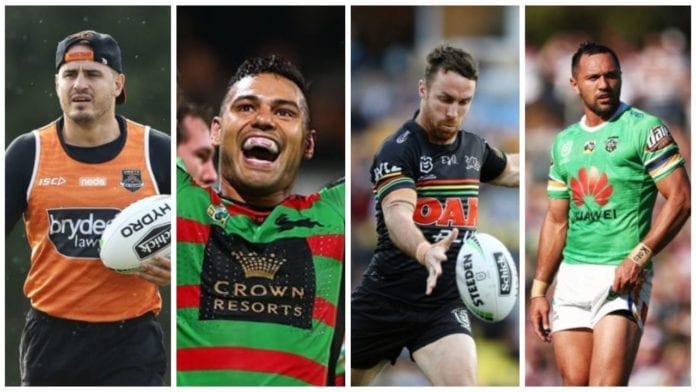 Josh Reynolds, Ben Te'o, James Maloney and Jordan Rapana are on the Bulldogs target list as they prepare to make moves post COVID-19 to beef up their modest playing roster, according to The Daily Telegraph.

The COVID-19 shutdown of rugby codes around the world has placed the future of players such as Te'o and Maloney towards uncertainty and placed future moves such as Raiders-bound Rapana in doubt.

The Bulldogs are expected to have millions available under the salary cap in 2021, as well as money available this season due to the deregistration of Corey Harawira-Naera and Jayden Okunbor.

With the extra money available, The Daily Telegraph has also stated that up to 12 players have been pushed towards signing with the Bulldogs by player managers and rival clubs.

These 12 may include players who could potentially leave clubs frustrated with a lack of playing time in a reduced season.

Reynolds, 31, has previously stated a desire to return to Canterbury, where he played from 2011 to 2017. This will be the third time in 12 months he has been linked to a move back to his former club.

But with two years remaining on his $3 million with the Tigers, talks have only entered preliminary stages for his return.

Maloney looks to be happy currently in the south of France, where he is playing for the Catalan Dragons in his first year of a three-year deal with the Super League Club. Despite this, his name has entered discussions with the Bulldogs.

One source with inside information told The Daily Telegraph that players may not even realise they are being shopped around.

“Canterbury has spots to fill and every club knows that,” the source said. “The Bulldogs have a heap of players being thrown up to them. The club will look at each player but isn’t chasing any of them aggressively just yet.

“Others in the game are asking Canterbury whether they would consider the players and the club said ‘yes’.”

Rapana, 30, is expected to sign a short-term deal with Canberra for 2020 but may be available for next season. Rapana has become available after the Japanese rugby union competition, where he plays for Panasonic Wild Knights, was suspended due to coronavirus.

Te'o, 33, is also in a similar situation with his club, the Sunwolves, also under suspension due to Coronavirus. Te'o is considering a return to the NRL after a high-profile stint in English rugby union.