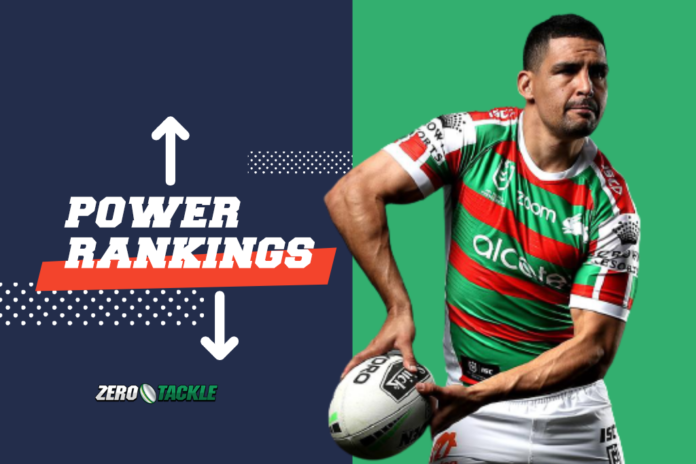 Week 1 of the finals had everything. A blowout loss, a major upset, two brilliant games that could have gone either way. We say goodbye to two teams, ranking them for the final team this season, plus rank the remaining premiership hopefuls.

1. Melbourne Storm (Last Week: 1)
Another season, another preliminary final for the mighty Melbourne Storm! They did the job, with ease, over the formerly high-flying Sea Eagles to the tune of 40 points to 12.

They will sit, feet up, and watch Western Sydney rivals the Eels and Panthers go hard at each other knowing they'll be fresh. That advantage cannot be understated.

The almost guaranteed Storm and Panthers grand final will no longer happen. The Storm will likely now run into a Panthers side who has been belted for two weeks. This makes them undoubted title favourites.

2. South Sydney Rabbitohs (3)
The Bunnies jump the Panthers into second favouritism after their magnificent upset win over the Panthers on Saturday night.

Cody Walker answered his critics and delivered in a game of huge importance that now has the Rabbits sitting pretty.

They'll be well-rested and take on either the Sea Eagles or the Roosters, neither of whom had the games they would have hoped in Week 1. Their chances of going one step further than the previous three seasons exponentially rose with their 16-10 win.

3. Penrith Panthers (2)
Penrith not only stood on that banana skin on Saturday night, they fell head over heels on it. They now find themselves a mile away from a grand final that looked a near guarantee.

The 16-10 loss means a Western Sydney derby, in Queensland, for a crack at the Storm. Penrith will be confident, but they were confident heading into the Souths game also.

This is by no means season over for the Panthers. They have all the talent in the world to overcome the odds but history has shown the week off is of huge benefit.

4. Manly Sea Eagles (4)
Manly were the huge disappointments from Week 1. They were blown off the park by the Storm and every sense I have urges me to write them off. 40-12 is not a pretty scoreline when you're on the wrong end of it.

Tom Trbojevic was reduced to a spectator, while the Manly forwards were made to look like kids rather than the superstars they are.

They'll start deserved favourites against the Roosters but they'll have to play a completely different level of football if they wish to avoid a straight-sets exit.

5. Sydney Roosters (5)
The Roosters escaped by the very skin of their teeth on Saturday evening. They, by all rights, should be on the Mad Monday rebound. Instead, they face a very winnable game this weekend for a shot at a preliminary final.

Sam Walker came onto the field in the 71st minute, kicked the go-ahead field goal then made a match-winning tackle. What a performance from the youngster.

The Tri-Colours are going to need everything to go their way this Friday night, however they have one of the game's elite in James Tedesco and he has shown you can never write off a side while he's up and about.

6. Parramatta Eels (6)
The Eels answered some serious questions by defeating the Knights on Sunday afternoon. Mitch Moses stood up and was best on ground and outplayed Mitchell Pearce.

It wasn't the kind of performance that makes me believe they can bounce the Panthers this Saturday night but I do believe they will be in it.

Much like the Roosters, they're going to need a lot to go their way if they're going to upset the Top Four switch-over we all expect, however they have the squad to cause an issue here if good enough.

7. Gold Coast Titans (7)
The Titans will very proud of their performance, yet will be upset they're not playing this weekend. They were a pass away from upsetting the Roosters on the bell.

The 25-24 loss ends their season but provides them so much to work on for next season. They've moved on a wealth (literally) of talent and look ready should a big name player become available.

There was so much to like about the Titans in 2021. They finished exactly where I, and most, had them. In the finals but a week one exit. Encouragingly they should have gone a step further.

8. Newcastle Knights (8)
Newcastle, for the second straight season in a row, led their Week 1 elimination match after scoring in the opening minute. Unfortunately, as with last year, they also exit at the same stage.

Ponga did everything within his powers to drag them over the line but their defence let them down and a misplaced Mitch Pearce kick ultimately handed over victory.

Newcastle delivered as expected. For a long while it looked as though they may not play Finals footy so overall 2021 is a building block for bigger things to come.

‘Gap year’ looming should ex-Bronco be bounced by Bunnies