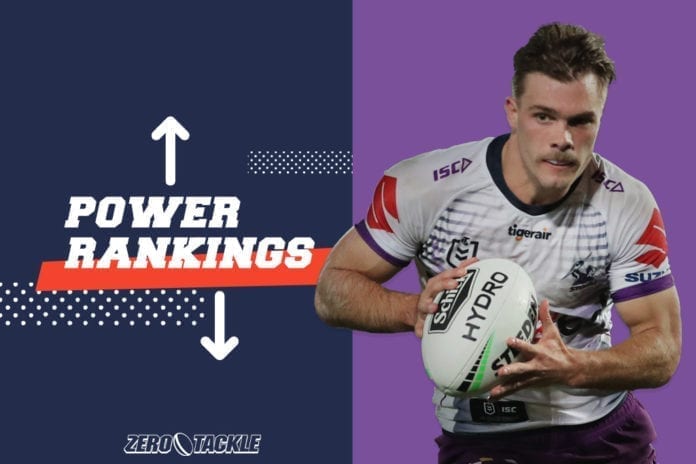 The Eels recorded their second straight win sans Mitch Moses and retained their spot atop the NRL Table. The 10-4 win over the Knights was far from pretty but more a case of job done. Ryan Matterson continues to firm as the buy of the year while Maika Sivo crossed for yet another try. Nathan Brown was monsterous upon his return. Reed Mahoney is on a huge rise toward possible Origin selection. How well is King Gutho playing right now? An absolute joy to watch.

The Storm beat last year’s Grand Finalists in back to back weeks, sans Cam Munster. If they didn’t send a message last week, it was well and truly sent after picking up the competition points in the capital. Ryan Papenhuyzen is a metre eating machine with another 246 and a brilliant try. Brandon Smith may be the best bench player in the competition right now. Nelson Asofa-Solomona had his most impactful game this season with 147 metres from just 13 carries.

The Roosters bounced back from last week’s loss with a huge win over the Cowboys. Matt Ikuvalu scored five tries after being called upon during the warm up. No Morris no worries for the Roosters who ran riot and made the Cowboys look second rate. Luke Keary is the premier playmaker in the competition right now. Eight line breaks, over 400 more running metres and 37 tackle breaks came despite a 50/50 split of possession. James Tedesco dead set had spiders on him on Thursday night.

The Panthers ran rings around their hapless opponents on Saturday afternoon. The 56-24 win was probably closer than they deserved given the dominance. Leading 26-0, the Panthers scored every time they went wide. Young Charlie Staines scored four tries in front of his mates in a top grade debut that won’t soon be forgotten. They ran for over 600 more metres and had 12 line breaks. Dylan Edwards has been great since his return. This was utter domination. Nathan Cleary is absolutely flying.

The Knights were less than a metre away from forcing extra time after a brilliant contest against the Eels. A big and loud crowd was on hand to watch their side push the table-toppers all the way. Andrew McCullough continues to prove his importance after a mid-season switch. Ponga was kept quiet despite running for over 200 metres. Tex Hoy offered plenty off the bench and should force his way into the starting lineup very soon. Enari Tuala looked dangerous on numerous occasions.

The Raiders came within a whisker of continuing their incredible recent run against the Storm despite falling 20-14 on Saturday evening. A series of tough decisions did stunt their game at times however ultimately if Elliott Whitehead had held that ball and scored, this goes to golden point. Josh Papalii is almost impossible to stop after returning to the run on squad. Unfortunately this match will be remembered for two season-ending injuries to Josh Hodgson and Bailey Simonsson.

The Bunnies continue their up and down form with an up this week. The 18-10 win over the Tigers delivered two competition points, and not a whole lot more. Latrell Mitchell will miss two weeks after a moment of madness. Dane Gagai scored a hatty in July, but this time for club not state. Adam Reynolds missed four conversions which would have put the deserved space between the teams here. Damien Cook looked dangerous in the middle. Mago and Nicholls combined for 21 minutes and 70 metres.

The Tigers should have fallen here if not for results around them after a disappointing loss to the Bunnies. The 18-10 loss was heavily padded by two late tries and four missed set shots from their opponents. David Nofoaluma was kept quiet despite big run metres. Luke Brooks is well below par and needs to come under some scrutiny. I don’t understand the thinking behind bringing Harry Grant off for Josh Reynolds to move to hooker. Didn’t work. The Tigers looked best with Marshall on the field.

The Sharks were the big disappointments for week 9 after putting in a nightmare “effort”. That left edge of Townsend, Goodwin and Macdonald copped an absolute bath out wide. Blayke Brailey, Johnson and the Sharks bench kept them somewhat in this at points but otherwise this was a shocking performance. Talakai was an absolute machine during his short stint before a HIA ruled him out. Wade Graham needs a spell, Bryson Goodwin cannot play centre at this level and Chad Townsend’s position must be under serious threat.

The Dragons put in arguably their best performance of the season with a 34-4 win over Manly. Paul Vaughan was back to his best with 237 metres, while Mikaele Ravalawa had an absolute field day in both attack and defence. Matt Dufty has sparked this side since his return. Zac Lomax is looking every bit the player he promised to be with another huge effort. Ben Hunt at 9 is a far more important member of the Red V. This is the Dragons’ best side and can cause some serious damage if they can stay on the park.

The Titans were 12-0 down after seven minutes, completed at 65% and only made one line break … yet banked two important competition points. Beau Fermor’s 74th minute try delivered the points in front of a vocal home crowd, completing their comeback. Tyrone Peachey continues to find his way more and more into these games, which is of big benefit for the club. They looked far better with Corey Thompson back in the number one.

The Sea Eagles looked a far distant second for the second straight week sans Tommy Turbo. DCE is trying to do too much and errors are creeping into his game as a result. To say they missed AFB is a huge understatement but it’s not undeserved. A sole 28th minute try to Joel Thompson was all she wrote for the away side. Jake Trbojevic put in a big shift but was ineffective. Brad Parker will have nightmares about Mikaele Ravalawa for many weeks to come.

The Cowboys crossed for two late tries padding this scoreline more than they perhaps deserved. The 42-16 loss at the hands of the Roosters was what this effort deserved. Reece Robson opened the scoring in the 22nd minute but from there it was all Roosters. Josh McGuire had a big game beside the eternal running metres king Taumalolo but otherwise the Cowboys were spectators. Valentine Holmes should never have taken to the field on the night. Green and the player himself have to come under scrutiny for the error.

Talk about the one that got away. The Warriors, coming off a win last week, had their superstar captain back in the form of RTS yet still fell to the Titans. RTS was monstrous and scored a magical try yet couldn’t get his side home. Up 12-0 after just seven minutes this looked like a case of Warriors by how much, yet it did not pan out. Tohu Harris is in another world right now out wide for the Warriors.

The Broncos have finally snapped their losing streak and move off the bottom of the rankings here. The win was far from memorable but it was all about the points here. The 26-8 win over the struggling Dogs came on the back of a Tevita Pangai Jr special. He looked far better in the middle and has his spot for the rest of the year. Tesi Niu had a far improved game and now looks at home in the top grade. Patrick Carrigan is in the Origin talk as is Xavier Coates.

The Dogs, right now, are a distant 16th in every aspect. The Dogs had a 50% share of possession and an 80% completion rate yet couldn’t get anywhere near their equally out of form opponents in the Broncos. The Dogs really need some attacking spark from somewhere. Dallin Watene-Zelezniak runs his backside off but his hands continue to let him down. Luke Thompson looked impressive on his NRL debut but may be suspended next week due to a shoulder charge.