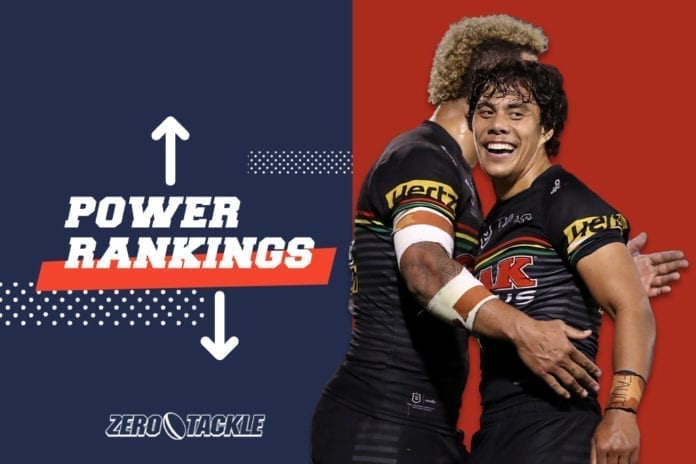 Penrith delivered a genuine shot to those doubting their credentials with a dominant win over supposed title-rivals the Eels. The 20-2 win was nothing less than what they deserved as they were far better on the night. This could have been a complete blow out if not for some brilliant Parra defence and a series of Panthers errors. Mansour continued his push for an Origin return. Jarome Luai, I simply cannot speak highly enough of this kid. He’s an absolute freak of a player despite his young age. This was, again, the Nathan Cleary show though. 64% possession. This could have been 50. Dylan Edwards 338 metres. These stats are insane!

The Storm kept their Minor Premiership hopes alive with a comfortable 36-20 win over the Cowboys. They switched off late after running out to an untouchable lead, otherwise this could have been a much larger margin. Although this was six tries to four, Cam Smith simply couldn’t miss from the tee. Nicho Hynes is a freakish talent. I’m convinced Smith has a youth potion. He laid on another three try assists in another huge effort. Cameron Munster is finding peak form at the right end of the season. Don’t forget the Storm!

Hmm. If I’m a Panthers or Storm fan, I’m suddenly hoping I don’t run into the Roosters before Grand Final day. They were absolutely untouchable on Saturday evening whilst thumping the Knights 42-12. Seven tries and seven straight goals meant this was a field day for the tri-colours. Luke Keary is back to full fitness and is running riot. Boyd Cordner’s injury was the only real downer on a brilliant night. Daniel Tupou and Keary both crossed for doubles, with Tedesco, Manu and Josh Morris scoring the others. Kyle Flanagan has responded to his axing with genuine class.

The Raiders overcame a slow-ish start to put the Dragons to the sword. They ran in 23 unanswered points in the second stanza, including a textbook disrespectful field goal from George Williams. Hudson Young lead the way with almost 200 metres. Josh Papalii left the game early through injury however didn’t seem to be in too much discomfort. John Bateman has made the Raiders a legit contender since his return, he’s a special talent. Jack Wighton scored another double. He’s becoming one of the game’s biggest threats when he runs the ball. Good win. Kept their top four chances alive.

The Eels had a real chance to show their rivals that they were in the title hunt. Instead they were played off the park by the Panthers. A penalty goal was all they could muster after spending the opening half hour defending their own line. They would show some amazing defensive resolve however it just seemed a matter of time. The scoreline flattered them truthfully. Their top metre eater, Nathan Brown (143) was almost 200 shy of Dylan Edwards for the Panthers. Blake Ferguson needs a spell. Mitch Moses looks lost in recent weeks.

The Bunnies locked in their spot in the finals with a … strange … win over the Tigers. Leading 20-nil before the half hour mark, this looked like a continuation of their recent, free flowing, point scoring form. Fast forward to full time and just a penalty goal proved the difference. Campbell Graham scored another two tries, while Gagai crossed for a four-pointer whilst heading the metres with 217. Despite the 26-24 scoreline being in their favour, I’m not sure how to feel about this victory.

The Titans continued their late season run of form, whilst confirming their standing as “Big Brother” over the Broncos after defeating them for the second time this season. The 18-6 win was actually more entertaining than the scoreline would suggest. Three tries to one, four line breaks to none, almost more 300 run metres. Strangely this was the club’s first win over Brisbane at CBUS Stadium. I dare you to tell me you don’t love both Jamal Fogarty and AJ Brimson. It cannot be done. Anthony Don is ageless.

The Knights got exactly what they deserved on Saturday evening after resting a certain fullback against the best side in the modern era. They turned up not expecting to win and played that way also. The 42-12 win saw them reduced to spectators, although there was plenty of talk on social media, mainly about people who backed the entire backline of the Roosters to cross for tries. Unimpressive a week after spanking the Sharks to secure their return to the finals.

The Sharks continued their ability to beat sides below them, wrapping up a spot in this year’s finals in the process of beating the Warriors 22-14. A late try to everyone’s favourite player Toby Rudolf was a rare highlight for a team who looked committed to giving away a six again in every defensive set. Siosifa Talakai is the bargain buy of the year. It’s no longer up for dispute. Fifita looked great from the bench. Mulitalo crossed for a double in a much improved effort. Conor Tracey offers worlds more than Chad Townsend. Blayke Brailey is set for a monster future.

The Warriors brave run towards a highly unlikely finals spot came to an end on Sunday evening, but not after one big effort. Jack Murchie’s 36th minute try send the Warriors into the break on a high despite being second best for most of the first half. Tohu Harris was hard to contain, whilst RTS was in absolutely everything. Like most weeks recently, there was a lot to like here from the Warriors. Nathan Brown has a lot to work with next season. There was a serious contingent of Warriors fans on the hill last night. Good to see.

The Tigers managed to push the Bunnies to literally the final moments on Thursday evening, although ultimately they fell short. The fact they managed to be in this so late after trailing 20-0 after 26 minutes says a lot. The fact they were 20-0 down though, unfortunately says it all. Brooks and Twal both spend time in the sin bin in a few moments of madness. David Nofoaluma topped the run metres for the Tigers, yet again. Four tries and 4/4 from the boot wasn’t enough after their awful start. They’ll miss finals yet again.

Although they won’t feature in this year’s finals series, Manly fans would have enjoyed their win on Friday evening over the Bulldogs. The 32-20 victory saw them run in six tries to three despite less than a 50% share of the ball. Morgan Harper continued his impressive run of form, this time scoring against his former side who will surely be regretting their decision to let him go. Martin Taupau scored a try. If you have not seen it yet, I guarantee it’s not what you’re thinking. Tevita Funa seems to be warming into his role at fullback. Too little, too late.

Ok let’s talk the positives first. Cody Ramsey! Two tries on debut. What a performance from the youngster, who (along with his mother) won the hearts of Rugby League fans everywhere. Let’s talk the negatives. Everything else! They were playing for their finals hopes here yet fell apart in the second half. It’s hard to place blame here as no one was out and out bad; they were just ordinary. Anthony Griffin has a big role ahead of him. His first point of business will be to work out what to do with Ben Hunt and Corey Norman.

Perhaps lucky the scoreline reads as it does. Always praising to get the first points on the board but the Cowboys failed to capitalise after, with Melbourne running through them despite a late resurgence from the North Queenslanders. Josh McGuire wasn’t too happy with the ref, looks like he’ll be spending some time on the sidelines.

The Dogs blew yet another chance to move from the bottom of the ladder, falling 32-20 to old rivals the Sea Eagles. Leading 10-0 at the half hour mark, things were on track. They would then concede three straight tries before the break. From there it was back and forth but truthfully they never got close. Will Hopoate continues his impressive return from injury. Again, I’m not sure looking for hit ups following line breaks is the right way to go about trying to attack. They’ll now finish last as I can’t see them beating Souths or Penrith.

The Broncos will almost certainly avoid the wooden spoon in 2020 through absolutely no work of their own and despite being the clear worst side in the competition. Despite leading 6-0 through an accidental try, the Broncos never looked like they were going to win this. They dropped their second game to the Titans in 2020, the first time this has happened. I say that as I’m not sure it was mentioned on the coverage … 816 times.

NRL hand out four new charges for Round 19