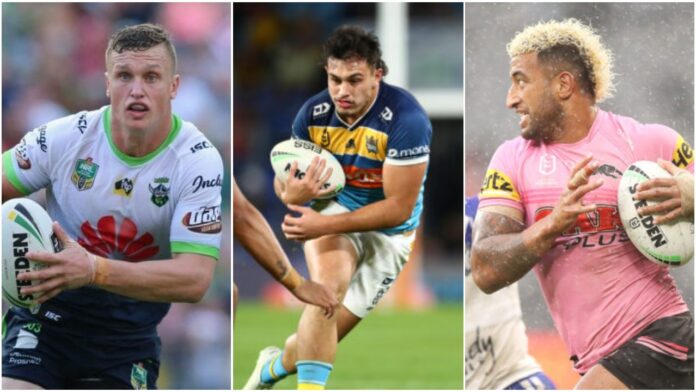 November 1 has come and gone, meaning the news and rumours won't stop, with a few movements for 2022, 2023 and contract extensions also going through this week.

The first major signatures for 2023 and beyond are yet to fall, but it would appear Penrith star Viliame Kikau will be one of the first.

Kikau originally trashed the Dragons' rumours, however, has, concerningly for Penrith fans at least, gone quiet on recent rumours of his departure from the foot of the mountains.

The Daily Telegraph are reporting that the Bulldogs have beaten the Cowboys for Kikau's services from 2023 though, signing him to what is believed to be a four-year deal worth around $800,000 per season.

READ MORE: Kikau to link up with Dogs from 2023

Parramatta star forward Isaiah Papali'i will join the Wests Tigers for 2023 on a three-year deal.

Papali'i enjoyed a breakout campaign in his first season with the Eels this year, being named Dally M Second Rower of the Year following his efforts in the blue and gold.

However, the Tigers have swooped on Papali'i's asking price of more than $600,000-per-season, a fee the Eels reportedly struggled to compete with.
READ MORE: Tigers land Eels' star forward

The Dolphins have reportedly turned their attention to Gold Coast star Tino Fa’asuamaleaui for 2023, with coach Wayne Bennett understood to have held conversations with the Maroons prop.

Fa’asuamaleaui is currently contracted to the Titans until the end of 2023, however the final year of his deal is understood t

Parramatta skipper Clint Gutherson has ended speculation about his future after agreeing to terms on a three-year deal to remain with Brad Arthur's side.

Gutherson is a major retention signing for the Eels following the recent departures of Marata Nikore (Warriors) and Isaiah Papali'i (Tigers) for 2023.

FULL STORY: Gutherson signs on until 2025

Knights fullback the latest to meet with NRL newcomers

Newcastle star Kalyn Ponga and Dolphins coach Wayne Bennett are understood to have held talks as the new kids on the block look to pry the Queensland fullback to Brisbane.

Ponga has been highlighted among several key Maroons figures to be on the radar of the Dolphins ahead of their inception into the NRL for 2023, a year the 23-year-old will be able to opt-out of given the contract clause in his favour.

Previous reports have suggested the Dolphins could look to make the Port Hedland-born fullback a lucrative offer in the vicinity of $1.4 million per season, a fee that would likely make Ponga the highest-paid name in the league come 2023.

The Newcastle Knights have officially released Mitchell Pearce from the final year of his contract at the Knights.

The club released a statement on Monday morning confirming Pearce has taken up an offer with the Catalan Dragons in the English Super League.

Wighton isn't off-contract with the Raiders until the end of 2024, however, the final two years of his deal are player options in his favour.

It means he, like every other off-contract player at the end of 2022, has the ability to negotiate with other clubs from November 1 - a deadline which passed almost three weeks ago.

The Dolphins are yet to make their first official signing ahead of joining the NRL in 2023, but a poaching raid on the Brisbane Broncos might headline it when they do.

Trio Pattrick Carrigan, Jamayne Isaako and Selwyn Cobbo are all understood to be on the Dolphins' radar.

The Broncos may face an uphill battle to retain the trio, with reports suggesting The Dolphins have held talks with all three players, according to The Courier Mail.

The New Zealand Warriors have reportedly made a 180-degree turn on their stance regarding young half Chanel Harris-Tavita.

It has been widely reported previously was that the Warriors weren't going to offer him a contract until at least Round 6 in the 2022 season.

While it's not clear whether Harris-Tavita has received any offers or not from other clubs at this stage, the Warriors are reportedly changing their stance, according to a New Zealand Herald report.

“Haven’t even made him an offer”: Shock revelation over Parramatta contract crisis

The Parramatta Eels reportedly are yet to offer star second-rower Ryan Matterson a new deal.

Brent Read told Triple M Radio that Matterson hasn't been offered a new deal with Parramatta desperate to sign someone in the coming days.

“To suggest they’re under the gun, under the barrel, is an understatement,” Read said.

The Melbourne Storm have two of the best halves in the NRL at their disposal, but with both Cameron Munster and Jahrome Hughes set to come off-contract at the same time, the club could face something of a crisis.

That comes following a shock revelation reported on Tuesday evening - that Jahrome Hughes won't be taking up an option in his favour for the 2024 season.

Warriors set to lose star of the future

The New Zealand Warriors are set to lose one of the game's most talented junior dummy halves.

Stanley Iongi, who is just 18 years old, has been part of the Warriors' system since the age of 15 and has impressed through the junior ranks, but has now moved to Australia.

While it had previously been reported that he had linked up with the Melbourne Storm, his manager Dixon McIver confirmed to Zero Tackle that was not the case, and that the youngster had signed with the Brisbane Tigers, who are the Storm's feeder team.