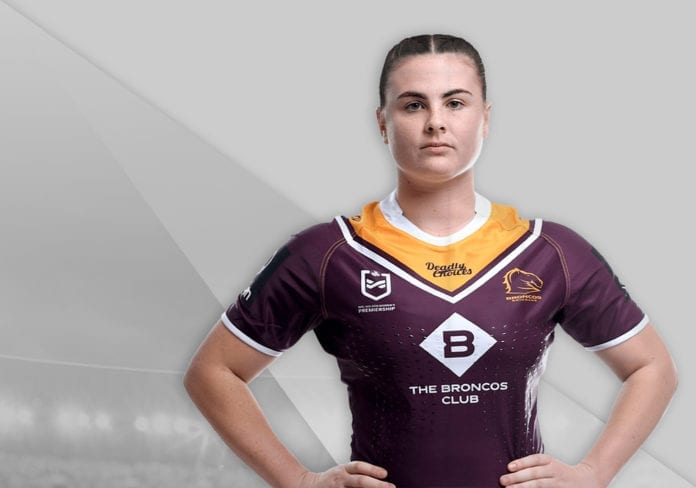 Over the next few weeks, we'll be checking in on the players to see what they're up to, and who they'd hate to be stuck with through all this.

In today's edition, we spoke to Brisbane Bronco's NRLW premiership winning centre Amber Pilley on her idol, her recent knee reconstruction, and which team mate would drive her crazy in isolation. Let's get into it!

ZT: So straight off the bat, you've come out of a knee reconstruction in the last few weeks, how're you feeling?

AP: Feeling good! I tore my ACL about five years ago, and that was a completely different experience to the one I'm having now. I'm much more positive and in much less pain, it definitely helps to know I am surrounded  by a great group of people to help me rehabilitate.

ZT: You've had a whirlwind 2019, winning the premiership with the Broncos and representing your culture with the Indigenous All Stars, what was the highlight?

AP: Thank you! It's hard to pinpoint my favourite moment, I am so grateful for every opportunity I get, but anytime I pull on the Broncos' jersey I feel such incredible pride. I love the team and what we have achieved together.

ZT: What did it mean to win the XXXX Fan's Player of the Year after such a strong season in the NRLW?

AP: I love interacting and getting to know my fans and fans of the women's game. I'm pretty lucky to be apart of the club as their fans are so active at every game and event. It was pretty special getting the award and honestly I'm so thankful for all the support I'm shown.

ZT: We know you love your comics, so I've got to ask - DC or Marvel? And what're you reading at the moment?

AP: I am a ride or die DC fanatic. Marvel has a great cinematic universe, there's no denying that! But I fell in love with DC through Batman the animated series and seeing Michelle Pfeiffer in Batman Returns! After that I started buying the graphic novels and now I have a pretty big collection of comics, pops, and other memorabilia. I'm reading Knightfall at the moment!

ZT: Obviously we're all couped up at the moment, what're you doing to keep yourself busy?

AP: I have just set up a Twitch account and plan to start to streaming! I have wanted to do it for such a long time but I have been way too anxious... But I always spend my downtime on my PS4 playing Apex, so why not?

ZT: Who's the last person you'd want to be stuck in isolation with?

AP: I don't know actually? Maybe Tazmin Gray, just because she can't sleep alone and I would want the bed to myself.

ZT: Which team mate would struggle the most being stuck inside all day?

AP: Probably Duzzi aka Sockbae (Chelsea Duzzi), if sshe couldn't leave the house to do her corona olympics, I'm not sure how she would exert all her energy and keep us all entertained until this is over.

ZT: With restaurants closed, what's the go to feed at the moment? Are you more of a cooker, or is the Uber Eats getting a workout?

AP: So far I've been pretty good, I've been a bit nauseous since the surgery so haven't had as big of an appetite as usual so I'm living off what I have at home.

ZT: You're close with former superstar Greg Inglis - what is it about GI that you look up to?

AP: I don't know how close we are, but he's always been my biggest inspiration in the game. In my opinion anyway, there is no better centre, such a powerful run and fend, he was a player who could make something out of nothing. I admired how involved he was with the women's game especially during the All Stars campaigns.

To work hard in rehab, stay positive and focused, and come back fitter and stronger

Thanks for the chat Amber! Stay tuned for the next instalment of 'Blythy's Lockout Low Down', and drop a comment below to let me know who I should talk to next, and what you want to know!