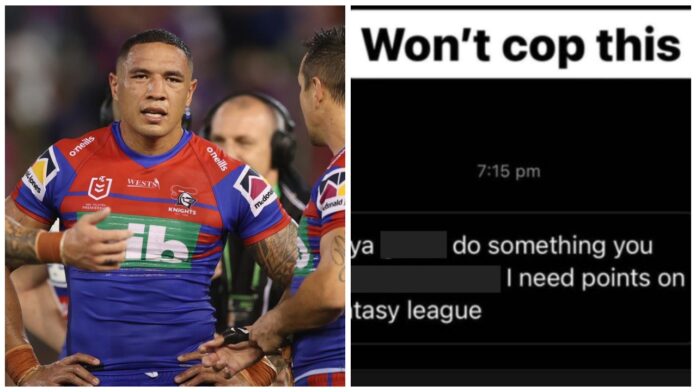 After his side's loss on Friday night, Frizell was left stunned by a horrendous Instagram direct message saying "oi ya gronk do something you f***ing coconut I need points on fantasy league".

Frizell took to his own social media platform, sharing a screenshot of the abuse to his Instagram story along with the caption "won't cop this".

The Newcastle Herald has reported that the incident is set to be investigated by police to track down who was behind the messages.

It's an ugly look for fans of the game, with this weekends incident following a number of other NRL stars calling out similar behaviour from social media trolls.

This comes weeks after South Sydney's superstar Latrell Mitchell was targeted with similar social media attacks. Two men were arrested and charged after being found guilty of sending abusive messages on social media, including telling the Rabbitohs fullback to die.

It is not limited to just NRL players, with a number of AFL players including Brisbane's Mitch Robinson and GWS's Callum Ward calling out the constant abuse from social media trolls in 2020.

Ward revealed on 3AW that he received death threats from Essendon supporters after a contentious game-changing decision, whilst Robinson has taken to Twitter hitting back at punters who abuse players about multi's.

Not one AFL player gives a flying f*** how we cost you a $100 multi, it’s $5 bet you idiot. If you’re struggling with that amount please don’t punt in the first place. Death threats & “hope you do your ACL next game” I dare say we won’t pay you out either.

The new age of social media and technology has caused continued pressure on players, with fans having unrivalled access to players through different digital mediums.

With a majority expressing their love and appreciation for their footy idols, it still provides an avenue for trolls to abuse players.

It is something that all codes are aiming to stamp out, with many instances of internet trolling against players being taken seriously by the NRL and AFL.

With the police likely to be involved with the Frizell's incident over the weekend, let's hope that it helps deter the trolls from their continued abhorrent behaviour.