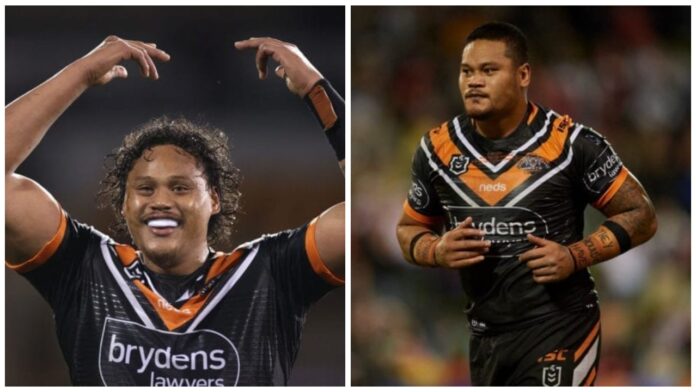 The Wests Tigers’ Leilua brothers, Luciano and Joey, could be split up as the club contemplates its next move.

According to a report by the The Daily Telegraph, the Tigers will open talks with Luciano to extend his deal at Concord.

However, Joey faces an uncertain future at the club, with the centre coming to the end of his two-year guaranteed deal.

Joey has now been dropped to the reserves twice this year by coach Michael Maguire, struggling with consistently and failing to recapture his past form.

It comes after he faced scrutiny in the off-season after reportedly being out of shape after the COVID lockdown.

The club has an option in their favour for 2022 but is unlikely to take it given his high price tag, however, could be willing to retain him on a cheaper deal.

Joey has played 221 NRL games since making his first-grade debut for the Roosters in 2010, also enjoying stints at the Knights and Raiders.

But it appears that the 29-year old’s career is at a crossroads and his days playing alongside brother Luciano could be numbered.

Luciano, the younger brother of the two at 24 years of age, impressed in his first season at the Tigers in 2020 and has continued his good form.

The second rower has notched up 68 NRL appearances since making his first grade debut for the St George Illawarra Dragons in 2016.

He is contracted at the Tigers until the end of 2022.