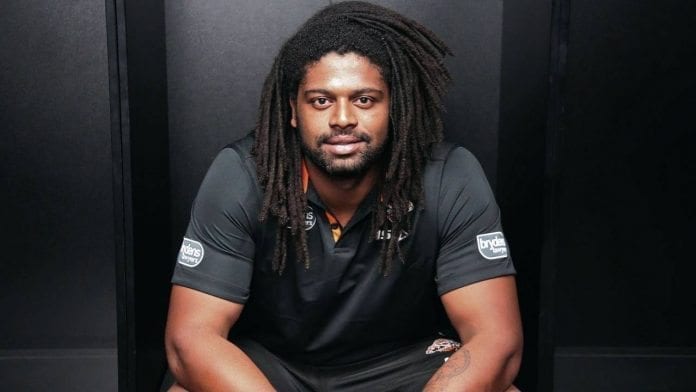 Is there a more infectious smile in rugby league than that of Jamal Idris? The big centre ended a near 700-day absence from rugby league on Saturday, and it’s damn good to see.

Idris’ last match in the NRL was in the April of 2015, with an ACL tear ending the centre’s season – and possibly career. After spending last year travelling the globe, evading a kidnapping and opening an orphanage, Idris marked his return to rugby league with a one-year deal with the Wests Tigers, and he’s ready to rip in.

Since the pre-season begun in early November, the former Kangaroo has managed to lose an incredible 11 kilograms, dropping his weight to 114kg, and reaffirming him as one of rugby league’s most exciting wrecking balls.

If St George Illawarra didn’t know that before Saturday’s trial match, they do now.

Coming off the bench during the first half, Idris slotted into the left centre position, and showed fans why he once played for the Kangaroos and New South Wales. From his first touch of the footy, Jamal re-announced himself to the NRL. Carrying three defenders on his very first hit-up, the grunt work is something that Idris was certainly looking forward to.

“I’m actually that eager just to run out there, you just miss the contact, you miss the physicality of it” Jamal told Fox Sports last week.

And while he played exclusively in the centres on Saturday, there’s no certainty about where he’ll line-up in 2017.

“Well at the moment I’ve been training for the centres, but saying that you never know, might come to game time and I’ll be in the second-row”.

His inclusion in the backline is set to force Kevin Naiqama from the centres to the wing, and Jordan Rankin out of the side. But with rumours emerging last week that the Tigers are shopping Tim Simona around, competition is well and truly alive.

Youngster Moses Suli made headlines a fortnight ago after signing the largest deal in history for an uncapped rookie. A three-year contract valued at $1.3 million, it’s a near certainty that Suli will see first-grade in 2017, though Idris is all but guaranteed a starting centre role at season’s beginning.

Having the big fella back in rugby league is fantastic, with Idris joining a long list of players to return to the NRL after exiting, with Sam Burgess and Jarryd Hayne some of the more recent names. His positive attitude on life, his game-breaking ability, the cheeky grin he shoots the camera every chance he gets, Jamal Idris is a character. Something rugby league is desperately missing in an age of professionalism and clichés. And come March 3rd at ANZ Stadium, Idris will show the world what it’s been missing out on for nearly 700 days.

Welcome back Jamal, you’ve been missed.