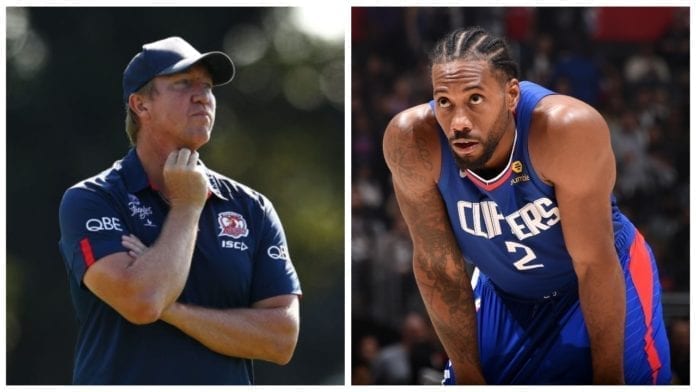 Trent Robinson must have had one eye firmly on the LA Clippers before both the NRL’s and NBA’s COVID-19 shutdown, stealing a play straight from Kawhi Leonard’s vocabulary.

Due to the competition’s re-structuring due to the coronavirus shutdown, no team has any byes in the 2020 season. It means that the teamss that make this year’s Grand Final will be required to play 22 straight weekends of football, barring a finalss week two rest up.

And with the new six-again rule in place, coaches are required to not just manage fatigue across the 80 minutes, but five months of the NRL.

So what is ‘load management’, you ask?

The term shot to fame through Clippers’ star Kawhi Leonard, who would often sit out back-to-back to games to manage the physiological stress of constantly playing.

The NBA’s schedule is a lot bigger than the NRL’s – with 82 regular season games and up to 28 playoffs games per team. However, the NRL is more physically demanding and taxing aerobically, whereas the NBA requires more anaerobic training.

Basically, the NBA is built on short bursts – teams only have possession for 24 seconds and the court is only 28 metres long. Whereas when you look at the NRL, especially with the six again rule, teams can hold the ball for minutes, required to make several tackles and repeatedly get back the 10m onside.

Leonard only played 60 of 82 regular season games for the Raptors, leaving him fresh for a playoff series that saw him hit a series-winning shot against the 76ers, and picking up the Finals MVP against the Warriors (the NBA equivalent of the Clive Churchill Medal).

Trent Robinson has used 23 players in the seven games since the season restart in late May, with Joey Manu, Luke Keary, Kyle Flanagan, Jake Friend and Angus Crichton the only five players to have featured in every game since the restart.

Injuries have played a part, losing Victor Radley and Sam Verrills to ACL tears as well as Isaac Liu to a minor rib complaint and Daniel Tupou to an ankle. However, it’s allowed players like Lachlan Lam and Poasa Faamausili to gain minutes, with Faamausili also spending four weeks with the New Zealand Warriors.

James Tedesco has only played five games since the resumption, and don’t be surprised if Robinson bloods a 24th player in Freddy Lussick soon, with the first and second choice back-up hookers in Verrills and Radley gone for the season.

The younger brother of Darcy and Joey Lussick, who are both playing in the Super League, Freddy is a young hooker and should see some minutes soon so he’s ready to go if Jake Friend is out.

The constant rotation of players allows them to handle these little niggling injuries, and have your big name players fit, fresh and firing come finals time. Expect the halves pairing to both get a game or two off later in the season, with both playing all NINE games, two of only four players to have done so at the club.

If Kawhi Leonard’s 2018-19 season with Toronto is what Robinson is basing it off, then expect the Tricolours to click seamlessly at the business end of the season.👇