When French naval explorer Jean-François de Galaup’s ship entered through the heads of Botany Bay in 1788 and the nobleman’s heeled footsteps first strode across already inhabited shores, Sydney, in its present form, was altered forever.

Though the officer who would command voyages from California to Chile has taken his place in the dusty annals of Australian history for centuries, the often-wigged aristocrat is also a footnote in the chronology of the city’s oldest, proudest and loudest rugby league outfit.

While the French count’s title of Lapérouse was suitably scuffed before being printed across Sydways map books, the man who would never know the joy a spinning Steeden can provide is forever tied to a code that his compatriots would only take up 150 years later. 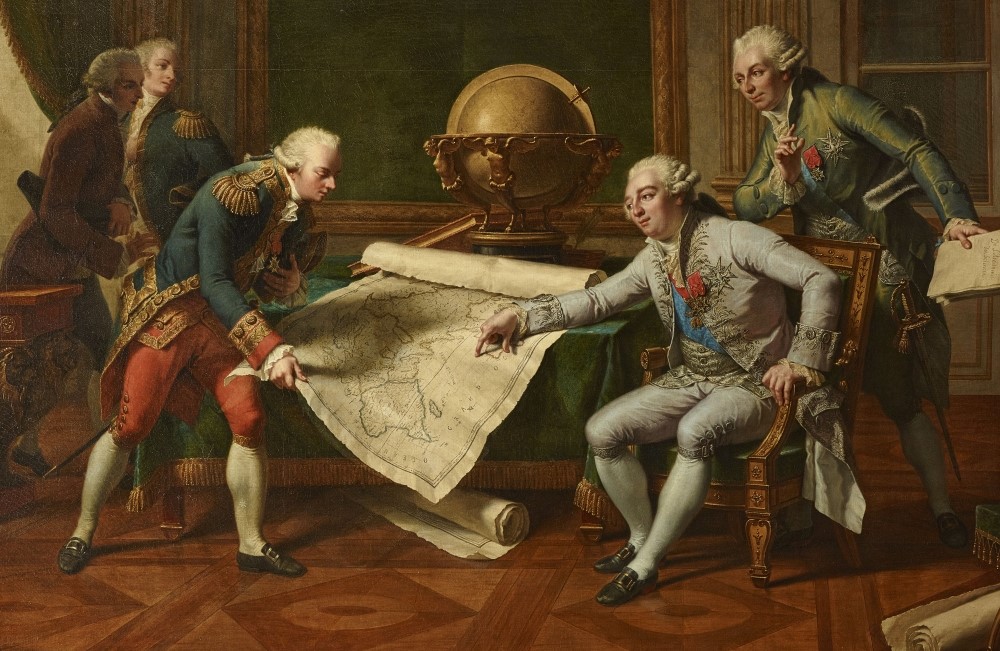 Situated between Mascot Airport and the shark-infested currents of the Pacific Ocean, La Perouse is a suburb that has a reputation for both plenty and scarcity.

Even while there are picturesque views on clear nights and there have even been generations of fearless blokes who have paraded reptiles before astonished tourists, the horrors of displacement from European invasion and the pains of the depression are also burnt into the area's lineage.

However, for one of many aortic chambers that pumps cardinal and myrtle blood around South Sydney’s working-class streets, the heart of the land known as Gooriwal in the native tongue lies just a Greg Inglis run from the sands of the bays.

As one of 15 sides that take part in the South Sydney District Junior Rugby League Competition, La Perouse United have a rich tradition of sowing seeds and harvesting their talent to take to the first-grade market.

Although names such as Garlick, Peats, Roberts, Farrell, Champion and try-scoring wizards, Merritt and Johnston have all traded the Panthers’ black and white jersey for the Rabbitohs’ pairing, it is a link between a pair of sterling backs that has truly highlighted how rich the Bunnies’ breeding ground is.

Notwithstanding being born in the country town of Karuah, Eric Simms’ name became synonymous with the capital and its suburban surrounds after eventually heading south.

Though Simms’ unerringly accurate toe-poked approach to goal-kicking would eventually see him end his days at Redfern Oval after 206 first-grade appearances and a then record of 1,841 points for Souths, it was his pathway to prominence that set a trend.

Irrespective of the fact that the now 76-year-old cut his teeth beside the saltwater estuaries of the Hunter rather than in the sea spray of Cape Banks, Simms’ legacy came after he knelt on the playing fields of Sydney in wait of the starter’s pistol.

Even if memories of the stars' past successes at the Sydney Cricket Ground will remain scorched onto frontal lobes for life, it was another premiership during the mid-sixties with La Perouse that saw Simms tear off with a shiny baton in hand. 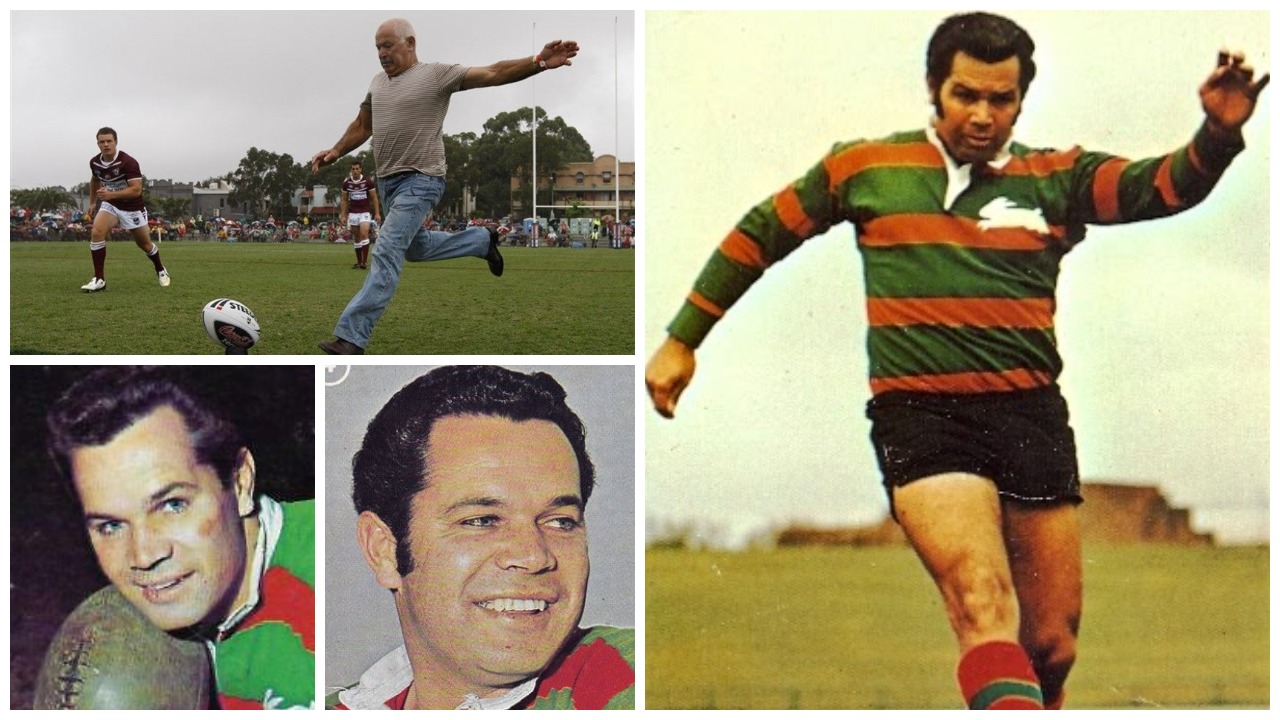 And run Eric would for the rest of the sixties and much of the seventies before slowing to a meandering jog for the next four decades as his studded boots were traded for moccasins.

Even if Redfern was traded for a recliner after 1975, and the wild and wooly weekends were swapped for the wharves, the transferrable wand remained with Simms for another 37 years before a heavily inked kid from the flats finally relieved the longshoreman of his duties.

While Adam Reynolds would play for about as many junior sides as he would eventually score points, the fact that he wore a La Perouse jersey in between stints at St. Peters, Alexandria and Kensington saw him earn the honour of taking the baton from ’Ecka’s calloused hand before pumping his little legs around the track full tilt.

Outside of the pair’s shared past playing for the Panthers, the many similarities between these post splitting savants made Reynolds the obvious candidate to fill the second slot in this collaborative relay.

Like his predecessor, 'Reno's pacesetting laps around the league have seen him draw plaudits, land prizes and ultimately earn the right to fight for another premiership this Sunday.

Still, it was the man who is more South Sydney than Reggie the Rabbit's final circuit this season that saw the previous venn diagram between the duo inch closer to that of a circle.

In Round 5, Reynolds channeled his antecedent by slotting the first two-point field goal after the law to curb Simms' accuracy was finally repealed.

In Round 21, the man who had been leading his pack around the park for seasons finally surpassed the marker laid down by his forerunner with a record-breaking shot from the touchline.

Though Alzheimer's and Covid kept Simms' away from Robina when his scoring milestone was finally passed this August, the hooked ball from the chalked boundary line that saw his colossal figure fall could not have come from a more befitting boot.

Speaking the year prior to his last lap in a hooped jersey, Reynolds explained that it was his desire to leave a mark with his boyhood club that saw him continue to clench his tattooed knuckles around the now rusting baton.

“When you look at all of the club legends and the faces on the wall downstairs [at Redfern Oval], you see all the images from the past and you want your image on the wall as well,” Reynolds told Fox League.

“That’s one thing I’ve always prided myself on is trying to entrench my name in the club and to leave a legacy behind. You occupy the jersey for the time you’ve got it and you want to leave it in a better place than what you got it in.

“For me, that’s important. I want to be on the wall one day and I want kids in the future to look back and recognise what my time at the club has been.”

With a move north looming and his ageing muscles getting the better of him during last weekend's preliminary final, Reynolds' hand over to the next runner in sequence may have come earlier than anyone was after.

But be that as it may, at least there was someone waiting around the bend this time around.

When Adam Reynolds crossed the line on the 5th of October, 2014 to sew up South Sydney's long-awaited return to rugby league's summit, Blake Taaffe was a 15-year-old kid with dreams of replication.

Having grown up playing 'Nappy League' with La Perouse, the relative of yet another Rabbitohs' goalkicker from the area in Kevin Longbottom more than meets the markers laid down to continue the line commenced by Simms.

Even though some of his fledgling steps on the paddock came on the state's Central Coast, it was Taaffe's past and his calm head over the tee against the Sea Eagles last Friday that saw many sit up to see him as the prime candidate to become the next link in this French suffused connection.

While the 22-year-old was at fullback as Souths earned their ticket to their 35th decider, Reynolds' stamped ticket to the Broncos for 2022 and the impending lethal reinjection of Latrell Mitchell should see Taaffe afforded a chance to fill the outgoing halfback's humongous boots next season.

Some may suggest that it is far too early to announce that the kid who has only just broken through can run with this previous pair of sprinters, but given how quickly he has moved from the starting blocks, I'll leave you to pass your own doubts on to Blake.

That is if you can catch him, of course.

Given La Perouse's undeniable ability to continue supplying Souths with freakish talents, the question must be asked - is there something in the Botany water that allows for putting the ball over the black dot to look like a walk across the Bare Island Bridge?

Whether the intangibles of a tight knit community are to thank or instead the multiple-millions of dollars the Rabbits have poured into junior development, the recipe for success may be as ambiguous as the contents of Colonel Sanders' spice rack, but it is also just as successful.

With more names bound to be plucked from the region in the future, even if Taaffe does take the baton and put the blinkers on, the land named after a long deceased French sailor is sure to produce another runner for yet another handoff sooner rather than later.