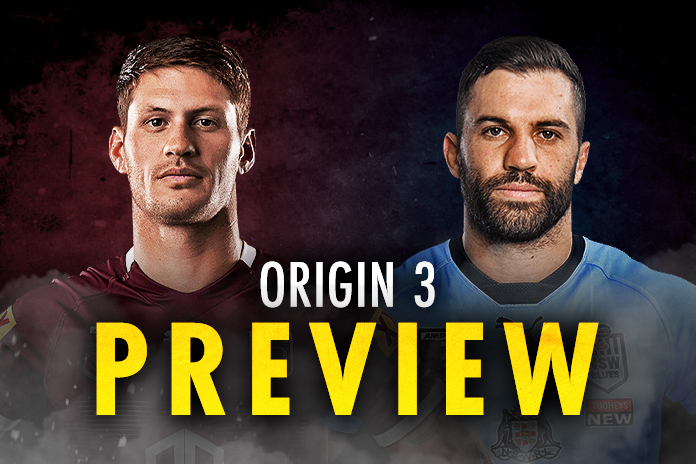 The countdown has dragged on forever but we’re finally here – the 2022 State of Origin Decider at Suncorp Stadium.

After Queensland stunned the NSW Blues with a dominant 16-10 win in Game 1 the script was flipped in Perth as Brad Fittler’s team destroyed the Maroons 44-12 to level the series.

Having lost their only home game the Blues are now faced with a daunting prospect – winning an Origin decider at Suncorp Stadium. No New South Wales side has been able to seal the deal in enemy territory since 2005.

Before that historic achievement, NSW had tasted series-winning success in Queensland just once in the three-game format – back in 1994, when current Blues coach Brad Fittler scored a try and a field goal as NSW claimed a 27-12 win.

But it won’t just be history the Blues have to overcome, with a raft of changes to both squads thanks to injuries and COVID.

While Game 1 standout Jack Wighton was omitted from the Blues’ victory in Perth due to COVID protocols, Queensland have had to make their own changes, confirming Melbourne Storm playmaker Cameron Munster and Cowboys winger Murray Taulagi will miss today’s clash after testing positive.

This brings experienced Broncos back-rower Corey Oates and Cowboys half Tom Dearden into Billy Slater’s team, although the coach is still playing coy about what role Dearden will take on his Origin debut in conjunction with Ben Hunt in the Maroons spine.

In a big boost for the Maroons, Kalyn Ponga has been cleared to play after passing all concussion protocols. Meanwhile 19-year-old Cowboy Jeremiah Nanai, who appeared in the first two games from the bench, has been moved to the starting side due to Felise Kaufusi’s absence.

He’ll be replaced on the bench by his club team-mate Tom Gilbert, who has been attracting plenty of attention since his promotion to the Cowboys’ starting squad this year.

While COVID has only claimed 19th man Nicho Hynes from the Blues camp this time around, they’ve still been forced into a number of personnel changes.

Jack Wighton returns to the squad, but in the 19th man role after Brad Fittler opted to keep the successful centre pairing of Stephen Crichton and Matt Burton from Game 2.

Surprise inclusion Jacob Saifiti has been confirmed to make his Origin debut from the bench following the news that Parramatta’s Junior Paulo will fill the starting prop role vacated by the injured Payne Haas.

Saifiti comes in as a late replacement for squad member Jordan McLean, who was poised to make his own long-awaited Origin debut until he was forced out with a hamstring injury suffered during a training session. Dale Finucane has also joined the extended squad.

While the Maroons claimed a Game 1 victory behind excellent tactics, superb execution and a little bit of luck, it was a different story in Game 2 as the Blues shut down the Maroons’ lethal edges and destructive props.

Though the Maroons pack had been dominant in the first game, they were found wanting by solid defence and an inability to build any real momentum as the series moved to Perth.

Only one of Queensland’s props exceeded the 100-metre mark in Game 2 (Patrick Carrigan – 103). It’s a stark contrast to the Game 1 victory, where five of Queensland’s big men made in excess of 130 metres.

It wasn’t just forward domination that cost the Maroons in Game 2, with poor discipline and defence both central to their second-half collapse.

Billy Slater’s men missed more than twice the number of tackles than NSW (56-23) and made more errors with the ball in hand, killing the momentum that proved so essential to their success.

Eliminating those errors will be key to the Maroons asserting themselves on the contest, something they struggled to do as desperation crept into their play as they struggled to stay in touch with the rampaging Blues.

But now we’re at a point where each team is acutely aware of what each other is capable, and the problems within themselves that led to their respective losses.

There are a massive number of unknown quantities in this contest, but what we do know is that we’ll get to witness some fantastic contests in key positions.

Maestros in the Middle

While Nathan Cleary received a wave of criticism after struggling to assert himself in Game 1, he responded brilliantly in Game 2, finishing with two tries, two assists, three tackle-breaks and a line-break assist.

Backing all of that up with excellent kicking and superb game management, he controlled the game superbly and will need to be contained if the Maroons are to have any hope.

Meanwhile Daly Cherry-Evans is just as important to Queensland, especially in Munster’s absence.

His influence was restricted massively by excellent defence and errors, only getting to attempt one bomb and one grubber from 12 kicks, so bad was the field position the Maroons had. While his numbers were better in Game 1, it remains to be seen how effectively DCE can lead the team and assert himself without Munster sharing the load.

He’s performed regularly at club level in similar situations, but Origin is a different situation.

It's hard to know exactly what to expect as we head to another thrilling State of Origin decider. Thanks to Munster’s injury and the Blues’ rampage in Game 2, NSW should head into the game as favourites, but only just.

With the weight of history sitting on them and a number of unknown quantities on both sides of the half-way line, there are a host of variables that will ensure a few more twists and turns are yet to come in the final 80 minutes of Origin 2022.