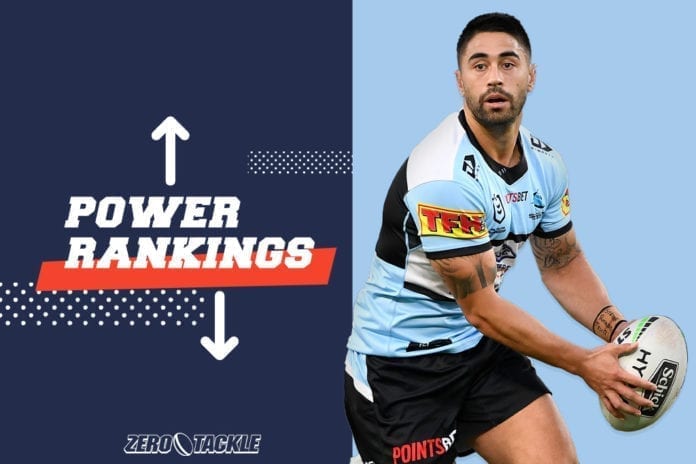 The Eels returned to the number one spot with a big win over the Cowboys. Maika Sivo had an absolute field day on the left, scoring four tries. Kyle Feldt will be having nightmares about the hulking Fijian. Clinton Gutherson had a wonderful game in his 100th NRL appearance. RCG and Junior Paulo lead the way with over 200 metres each, completely dominating the middle. Jai Field looked great on debut for the club, filling in very capably for Mitch Moses. Great win for a team fast becoming Premiership heavyweights.

What a game!!! The Storm won one of the top two games of the season in the most incredible finish in recent memory. A Cam Smith penalty goal in golden point secured the competition points after a literal last play field goal from Ryan Papenhuyzen sent the game into extra time. This came less than a minute after they fell behind. It’s almost impossible to describe this finish. If you haven’t seen it, correct that immediately. Cam Smith played well in the halfback spot however changed the game when returning to dummy half. How good is Brandon Smith?

The Roosters dropped their first game since the resumption of the competition in incredible circumstances. The Morris twins had them set for a firmly comfortable win, only to see them fall behind in the final moments. A clutch Kyle Flanagan penalty goal and Luke Keary field goal had them set for victory before a moment of madness from Jake Friend gave away a chip shot penalty. The Roosters injury curse continued with Daniel Tupou hobbling off and Boyd Cordner being HIA’ed late.

The Panthers deserve to be higher on this list if not for results around them, but they sit very comfortably in second position on the table that matters. There weren’t amazing in their win over the Tigers but they were very much the better side in the Western derby. A late Dylan Edwards try from a beautiful break from Apisai Koroisau wrapped up the game after a Nathan Cleary field goal put them ahead. Mansour was big on his return but it was again the middle men who set the tone here. A lot to like from this Panthers side.

Newcastle managed to hold on for a solid victory against a fast finishing Manly side. To win at Brookvale is a real feather in the cap of an emerging side. Kurt Mann was the star here for Newcastle. Ponga was very quiet in attack although did magically manage to return the ball twice when he looked dead to rights in goal. Saifiti and Klemmer largely did the job over their highly touted middle opponents. McCullough continues to prove his worth after his mid-season switch. Tex Hoy had a brilliant game after being asked to fill in for numerous positions.

Yikes. The Raiders made this difficult. Ricky Stuart’s reaction at fulltime summed up all of our thoughts when this one was over. That said Canberra managed to win a game despite not playing overly well. At 22-0 up this game should have been over but they had to scramble late to get the chocolates. Charnze Nicoll-Klokstad continues to be a netre eating machine, with another 266 here. George Williams continues his good run of form. I’m not sure the move to start Papalii from the bench was a good one.

The Sharks recorded their third straight victory, and second big victory, in a row despite playing only 40 minutes of football yet again. Shaun Johnson is on another level right now in attack but still has a crucial error in him. Fifita is an absolute monster off the bench. Matt Moylan was bossing this game prior to his injury. Chad Townsend is playing his role well after a horror start to the season. That Sharks bench is massive and very hard to stop when firing. A great second half showed what they can do. Bryson Goodwin is three tries in three.

The Tigers their win one/lose one habit of 2020 following a disappointing loss to local rivals the Panthers. They were very much in this game right until the end but ultimately fell short. BJ Leilua is set for a long, and well deserved, stint on the sidelines after one of the most ridiculous moments I can remember. Tigers fans defending their player are doing so purely for the jersey after a dog shot on a prone Dylan Edwards. Unfortunately it will largely take away from his side’s 73 minute effort. I love that Tommy Talau.

It wasn’t vintage South Sydney but right now wins are far more important than performances. The 26-10 win was padded via a late intercept try but Souths were the better side here. Alex Johnston continues to provide incredible service despite being linked with an exit from the club. All of the Bunnies back five ran for 100 metres which I’m sure their forwards appreciated. Walker and co just had that little bit of class that the Dogs lacked. Solid win. The Souths bench were good here.

Manly will be ruing this game as one that probably got away. They had enough chances late to not have to rely on a 50/50 call from the video referee. DCE had the most up and down game in memory, being sin binned for an act someone with half his experience would be ashamed of, then scored a wonderful try before alternating between having the ball on a string and forgetting how to play. AFB’s moment of madness will be the story out of this game but Manly came very close to beating the Knights sans two rep players.

The Cowboys followed up a brilliant win last weekend with a very disappointing performance against the red hot Eels. Valentine Holmes failed to provided any spark upon his return from injury. Kyle Feldt was given an absolute bath by Maika Sivo, who crossed for four tries. Jason Taumalolo topped the metres for the Cowboys, as he does every single week. 40% possession, 40 missed tackles, 800 running metres less than the Eels. The Cowboys were played off the park on Friday Night.

What a win. The Warriors managed to keep their season alive after defeating the Broncos despite being without RTS and losing a starting half in the opening minutes. Add the fact they were two tries down heading into half time and this is just an amazing victory. Ken Maumalo was an absolute beast running for 291 metres and scoring a try. Blake Green ran the show here in a week he was told he would not be re-signed. Two late tries iced a much needed victory for a side playing on pure heart.

At 22-0 down the Dragons looked like they were done and dusted and in for a horror trip home. They did manage to score three straight tries and almost pushed this game to golden point. The late surge will largely pave over a pretty dour opening 58 minutes though. Dufty, Lomax and Aitken ran the game late on while Cam McInnes continues his incredible season. They needed to start the comeback much sooner here. Something to build on.

The Titans, for 40 minutes, were right in this. The less said about the second half the better but they ran the Sharks close in the first stanza and should have lead at half-time. A 68% completion rate shows that they just couldn’t hold the ball long enough to get close. Tyrone Peachey had one of his better games while Anthony Don is almost unstoppable against the Sharks. Moving Corey Thompson out of fullback was a terrible decision. The bench use here was very hard to understand.

Different week, same story for the Dogs. Brave effort, moments of brilliance but ultimately lacking class. An injury to Adam Elliott may rob them of one of their genuine difference makers. Raymond Faitala-Mariner was solid as a rock and scored a handy try. I cannot believe the waste of an interchange spot in Kerrod Holland. He is not a makeshift dummy half. Tolman toils hard but the sooner they have Thompson in the line up the better. They need him in a big way.

Brisbane had everything their way. No RTS, Nikorima rubbed out in the opening minutes, two tries up … Somehow they still managed to find a way to lose this game. All the talk will be around the coaching future of Anthony Seibold but it should be the likes of Milford, Pangai Jr and Boyd facing the media scrutiny most. I literally had to jump on the app to see if Milford was still on the field at times. Farnworth and Coates provided enough to believe this can be turned around. Corey Oates is playing without confidence. This was poor.