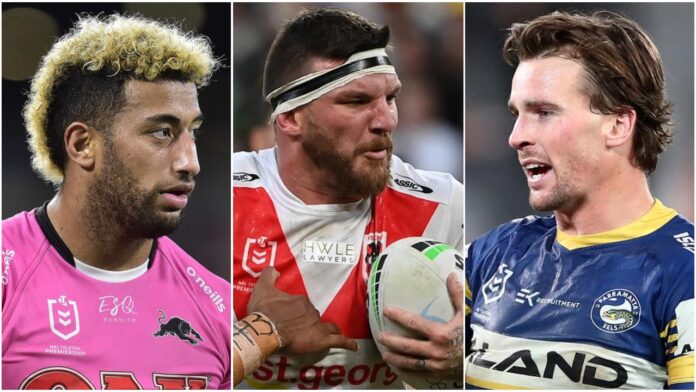 It has been another hectic week of NRL transfer news and rumours, with the market talk heading into a frenzy once again ahead of the August 1 deadline.

The Knights, Broncos and Roosters are in the thick of it all once again as sides start preparing list management calls for 2022.

South Sydney Rabbitohs and Queensland Maroons outside back Dane Gagai has officially put pen to paper with the Newcastle Knights.

The deal will run for three years and could well be the last in what has turned into an illustrious career for Gagai.

The St George Illawarra Dragons have confirmed the signing of George Burgess for the 2022 and 2023 seasons with a two-year contract announced today.

The English prop was known for his time at the South Sydney Rabbitohs, spending eight years there between 2012 and 2019. He played 149 games at the club before departing to head back to England. Burgess was part of the 2014 South Sydney premiership team.

Kyle Flanagan could be on his way back to the Cronulla Sharks for the remainder of the season on a loan move.

Despite the August deadline for player movement passing, the Sharks could still acquire a loan of Flanagan or other players if their own injury problems and squad depth called for it, particularly with the competition bubbled in Queensland.

It's understood Kyle Flanagan has been raised as a possible target for an injury-hit Cronulla team, according to Brent Read, who spoke on Triple M Radio.

Shock mid-season signing has no intentions of leaving Storm

Tepai Moeroa signing with the Melbourne Storm on a mid-season deal may have been the most surprising move of the 2021 NRL season.

After switching to rugby union at the end of the 2018 NRL season, Moeroa made just seven appearances for the New South Wales Waratahs over a year and a half in the 15-man game.

One of the best times to be a Rugby League fan is when a supremely talented and popular player comes off-contract.

Every fan builds a case for his/her team on social media, making it obvious why player x should join their club. Always seems obvious.

Below we look at the five most likely landing spots for the hooker turn second rower turn prop turn utility turn whatever he sets his mind to.

Out of favour Brisbane Broncos half Brodie Croft has locked in a move to the English Super League for 2022.

The 24-year-old Dalby-born Queenslander has struggled to find a permanent place in Kevin Walters’ team this season, and will move to the Salford Red Devils ahead of next season.

Hopoate commits to new club for 2022

Canterbury Bulldogs back Will Hopoate has signed on with Super League side the St Helens Saints on a two-year deal.

The 29-year-old will join the club next year after being a solid performer for the toiling Bulldogs for the past six seasons.

The Bulldog will have the option to extend for a further season after the contract expires should he wish to play on, meaning Hopoate could stay with St Helens until the end of the 2024 season.

Connor Watson seems likely to leave Newcastle at the end of the season with a new suitor emerging for the utility's services.

Watson, who has played 61 games for the Knights since moving from the Roosters at the end of 2017, has been linked to his former club after contract talks fell through with Newcastle.

Speaking on Big Sports Breakfast, Channel 9 reporter Danny Weidler revealed that a Roosters return was on the cards.

Cronulla have confirmed the acquisition of former Raiders second-rower Kai O’Donnell for the remainder of the season.

O'Donnell was released of his duties with Canberra last month alongside Adam Cook, now finding a new home in the form of the Sharks.

The Canterbury Bulldogs have signed Canberra Raiders' duo Ryan James and Corey Horsburgh on a two-week loan deal as the club deals with selection problems.

It's understood the loans will be assessed week-to-week.

Coach Trent Barrett was clutching at straws in order to field a complete team with a plethora of players out through injury or suspension.

The Titans are the latest club linked to contracted Roosters centre Joseph Manu, with Gold Coast tipped to join the race for the New Zealand international come November 1.

With Manu yet to lock away his future past the end of next season, a number of rival clubs have begun circling the versatile speedster, who is currently flourishing in good form.

While the Raiders weren't believed to be in the race for Titans half Ash Taylor, Ricky Stuart has revealed the club are considering the Gold Coast playmaker.

Taylor is understood to be of interest to some NRL clubs and even sides abroad, with Super League outfits believed to be showing some level of interest.

Currently off-contract and out-of-favour at times under Justin Holbrook, Taylor has become a large focus of this season's player market.

NRL “heavyweight” linked to Super League son of a gun

Appearing in just his sixth Super League game for Huddersfield, Will Pryce - 18-year-old son of former British great Leon Pryce - has thrusted his side into a win over Wakefield and in the process put the NRL on notice.

The Daily Telegraph is reporting that Pryce's performance thus far in the Super League has forced his name into NRL front offices, with keen interest from one Australian "heavyweight".
READ MORE: England young gun on the radar of big name NRL side

Broncos the latest club set to make play for superstar

The Brisbane Broncos are the latest club rumoured to be joining the list of teams interested in luring Joseph Manu in their direction from 2023.

While the New Zealand Warriors have reportedly confirmed they will make a play, it seems Manu is being linked with just about every club currently in the bottom eight.

The superstar is known to want to play fullback in the future, and while the Sydney Roosters would like to keep the out and out superstar, who has played most of his footy in the centres, but also has the ability to line up at the back, on the wing or in the halves, but will struggle to do so.

Brisbane Broncos back-up hooker Danny Levi is reportedly pushing hard for the club to hand him a new contract.

It was rumoured just weeks ago that Levi wouldn't be offered a new deal at the Broncos, with few options to stay in the NRL.

Since then, Brodie Croft, also identified as an English Super League target, has accepted an offer to turn out for the Salford Red Devils next season, but Levi hasn't accepted the same fate yet.

25-year-old Joey Lussick has been thrown into the number nine jersey for the remainder of the 2021 season at the Parramatta Eels due to Reed Mahoney' season-ending shoulder injury which requires surgery.

Despite impressing critics throughout the season when replacing Mahoney, Lussick has once again caught the attention of Super League clubs. A number of clubs including St Helens are set to be throwing good money at the 25-year-old, according to Wide World of Sports.
READ MORE: Lussick linked to Super League

The Brisbane Broncos are reportedly considering a homecoming for veteran prop Josh McGuire.

Regularly considered one of the hardest workers in the game with a no-nonsense attitude, McGuire spent plenty of time at the Broncos before plying his trade for the North Queensland Cowboys, and now, the St George Illawarra Dragons.

The Daily Telegraph are reporting that while the Broncos have previously expressed interest in Dylan Napa and Ryan James, the club are also looking at McGuire.

In a move which could create rugby league shockwaves, the St George Illawarra Dragons are reportedly weighing up a move for Penrith star second-rower Viliame Kikau.

Kikau will be free to negotiate with rival clubs from November 1 unless he re-signs with Penrith before that date, given he off-contract at the end of 2022.

Melbourne Storm icon Cameron Smith has named the Wests Tigers as the team which should make a play for the reportedly attainable Parramatta Eels captain Clint Gutherson.

Smith is of the belief Gutherson could attract big money, especially from a team such as the Tigers who are in need of a major leadership presence.

The 430-gamer and former Australian, Queensland and Melbourne Storm skipper spoke on SEN 1170 Breakfast on Thursday about the potential fit.

The Brisbane Broncos have confirmed Tesi Niu won't be going anywhere until at least 2023, with the youngster putting pen to paper on a new two-year deal.

Niu's signature has gone to the back burner for rugby league fans over the last week thanks to the Clint Gutherson contract saga, however, it had been previously thought the young gun would be forced out of Brisbane.

Two-way stoush set to break out for Sam Walker

The Sydney Roosters are set to do everything in their power to prevent Sam Walker from leaving the club.

While he is contracted until the end of 2024, having re-signed an extension at the end of last year, Brisbane Broncos' coach Kevin Walters has expressed his desire to have the young gun return to Red Hill.

FULL STORY: Broncos hoping to lure Walker back to Brisbane

27-year-old Moses Mbye will reportedly be heading to the St George Illawarra Dragons for 2022.

During the middle of the season, rumours of a mid-season trade with the Dragons began to circulate, however no deal ended up materialising before August 1, when mid-season moves had to cease.

However, The Australian's Brent Read told Triple M Radio that the deal for Mbye to go to the Dragons for 2022 and beyond is complete.

READ MORE: Dragons set to secure Mbye for next season

“Get it done”: Knights great urges club to pay up for utility amid rival interest

Watson remains unsigned past this season and has taken it upon himself to gauge the interest of rival clubs following a below par offer from the Knights.

The Roosters have emerged as a keen suitor for the 25-year-old, who is understood to have baulked at his current side's two-year deal.