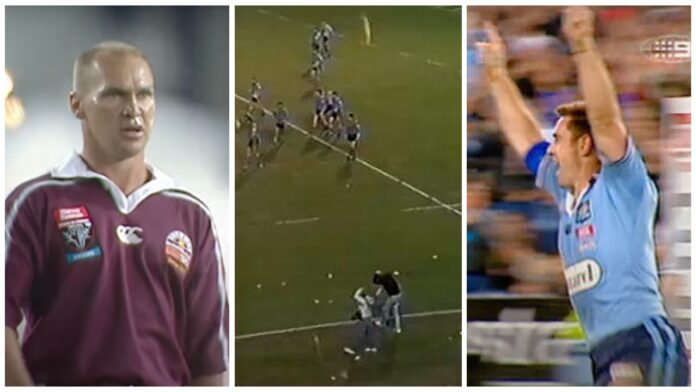 Everyone knows those famous words.

The Origin rivalry is nothing short of intense. Many of these players not only represent their state, but also the small towns and communities that they came from.

State of Origin is one of the greatest displays of camaraderie, late hits are greeted with jabs and choice words. Players are incredibly protective of their teammates, they form a band of brothers relationship where no man is left behind.

We take an in-depth look at some of the most iconic State of Origin moments and an insight into the characters that make Origin what it is today.

A scene we've all seen before. An Origin series locked at 1-1. In 2001 Maroons coach Wayne Bennett made a call that would shake the Rugby League world.

Hidden under pure secrecy Wayne Bennett recalled Queensland great and halfback Allan 'Alfie' Langer. Langer at the time was supposedly finishing up his career in England's Super League at the Warrington Wolves, however made the trip back down under for the 2001 Origin series decider.

Despite receiving endless amounts of criticism from the likes of Gus Gould, who thought the selection was pathetic, saying that Queensland had to "bring back 35-year-olds to win".

Bennett's selection proved to pay off, with Langer setting up two tries and scoring one of his own in a 40-14 demolition of New South Wales.

Tigers continue to inspire next generation

“We just got steamrolled”: Arthur worried over Eels effort in horror...