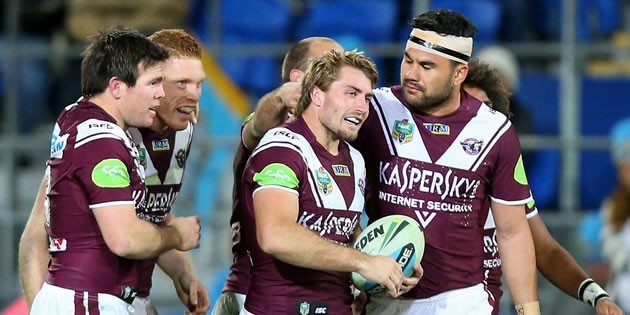 Last night’s clinical thrashing of the Titans reminded everyone that it is perhaps a little too early to count the Manly Sea Eagles out just yet.

Manly have now put together back-to-back performances that we have come to expect from the Brookvale based side.

Since officially deciding on their future, both Cherry-Evans and Foran have been able to play worry free football, and it is showing.

The fact Manly has finally been able to put the majority of their first choice team on the park hasn’t hurt either.

Just a few weeks ago it looked far more likely that Manly would be in a battle for the wooden spoon, rather than the top four battle they have been accustomed to, but with the return to the field, and form, of their main stars, it now looks as though they are launching a late raid for a finals position.

Neither the Titans nor the Sharks are likely to challenge for the NRL title this year, so Manly fans shouldn’t be too quick to head out and purchase Grand Final tickets, but their performances were a massive improvement.

The next few weeks will show where Manly are really at, but you’d have to be a brave pundit to truly write the Sea Eagles off just yet.

Over the next month they will face the table topping Cowboys, as well as the Warriors, Broncos and Rabbitohs.

Five of Manly’s eight remaining fixtures are at fortress Brookvale, which surely puts Manly in the fold.

The Raiders, Eels and Sharks will be no pushovers, but looking at the rosters of each side, Manly should enter those games as heavy favourites.

The four previously mentioned fixtures, along with a game against the Roosters, present a tough challenge, however Manly at full flight can worry anyone.

It’s incredible to consider a side that has lost ten games already this season as any chance of making the finals, but any side containing DCE, Foran, Matai, Lyon and Stewart cannot be discounted.

Manly’s forward pack is going to have to win the battle against some of the game’s premier forward packs if they are to allow their brilliant backline the space they need.

Last weekend they outplayed a forward pack containing Andrew Fifita, Wade Graham and Luke Lewis, amongst others, so it’s not as though they can’t do it.

Looking at their fixtures, perhaps Manly left their run too late, but this is one of the closest NRL seasons in recent memory, and despite sitting on the foot of the table for a long stretch of the season, they’re only a big win outside the eight.

If Manly can snag two wins from their remaining three away games, who knows?

Titan’s fans had every right to boo DCE

It was pretty hilarious to see some on social media condemning Titans fans for booing Cherry Evans.

Titan’s fans, all 500 or so of them who turned up on Monday Night, had every right to boo the man who has left their recruitment dive in absolute tatters.

Aidan Sezer signed for Canberra after DCE made his decision public, and you have to believe that Nate Myles also left as a result of the huge money dedicated to the young half.

Let me be very clear here. What Cherry Evans did broke NO rule. It was well within the rules, and perhaps Titans officials were the only people in the world who believed Cherry Evans would honour his deal, but fans have every right to be upset.

A player has come out and said how excited he is to lead the club into a new era, only to pull the pin at the last minute, to re-sign with Manly.

Cherry saying he’s “over it” is all well and good. He has a $10 million contract and plenty of talented recruits coming to his club next season.

The Titans are left without Aidan Sezer, plus who know how many others players, as they recruited on the basis they had signed the young superstar.

Laurie Daley says he will stick by the players who copped a record loss last Wednesday Night.

I admire Daley’s commitment and loyalty, however if he can’t pick a side based on form, rather than loyalty, then perhaps it’s time to look elsewhere for a coach.

There are plenty who criticise NSW for not mimicking QLD’s “pick and stick” policy, however once again it is worth pointing out that the QLD side has consisted of Slater, Thurston, Cronk and Smith.

Easy to pick and stick when you’re picking a spine full of possible future immortals.

NSW can stick to a side once they’ve picked the correct one.

Just on that, last season NSW won the series and there was no outcry when Josh Reynolds was dropped. He simply wasn’t in the form needed to tackle the brilliant Queenslanders.