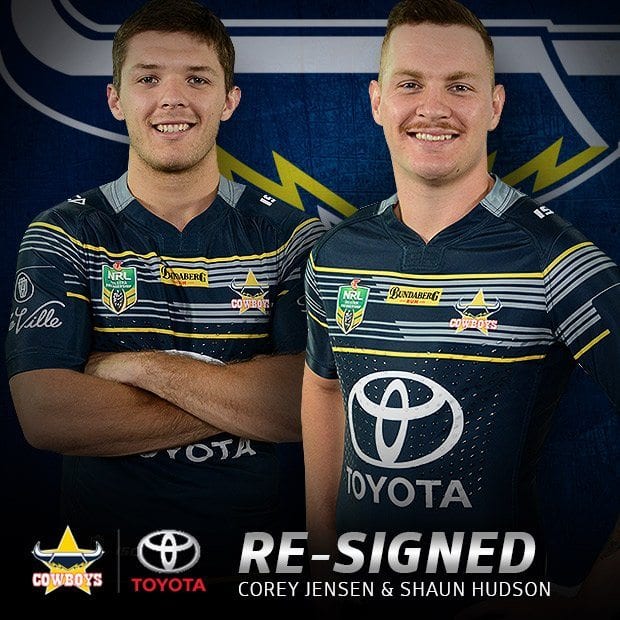 Forward Jensen, 23, made his NRL debut for the club in Round 8 against the Dragons this year and will line up for his ninth game when the Cowboys are hosted by the Roosters on Saturday.

The Bowen junior has extended for a further two years, taking him to the end of the 2019 season.

“I’m over the moon to have been able to extend my time at this great club,” Jensen said.

“I played here as a youngster in the under-20s, loved my time here then, played in the Queensland Cup for a couple of years, and jumped at the chance to join the Cowboys’ senior NRL squad this year.

“I’m learning so much and get fantastic support from the coaching staff and my teammates.”

RETENTION: Corey Jensen (2 yrs) and Shaun Hudson (1 yr) ... great to keep you both on board lads#ridemcowboys pic.twitter.com/GSvVfk4FAL

Hudson, 22, joined the Cowboys in the 2016 season, playing for Cowboys feeder team the Northern Pride for the season.

The start of 2017 promised bright things for the young centre, however , season-ending knee injury at the Auckland Nines tournament consigned him to a season of rehab.

With his recovery well on track, Hudson is looking for a brighter 2018 after agreeing to a one-year extension.

“I’m grateful the club has stuck with me and allowed me a chance to show what I can do on the field next season,” Hudson said.

“The coaching and medical staff have been an enormous help to me in my recovery and I still love being around the boys every day.”

Cowboys General Manager – Football Peter Parr said the re-signings were an investment in the future and a continuation of the club’s strong retention policy.