The Tigers may be competing in yet another season that won't end in finals footy, but the club's importance reaches far beyond on-field results.

Each and every week the Wests Tigers inspire the next generation of fans, coaches, volunteers and players.

One such fan is nine-year-old Lachlan, whose love for the club has seen him attend every game this season and has his future sights set on running out in the colours.

Despite his mother, Dragon's fan Courtney's, best efforts, little Lachlan was never going to support anyone other than the Tigers.

"I tried hard but failed miserably." Courtney told Zero Tackle when asked about her efforts to have Lachie follow in her fan footsteps.

"I decided to fly the white flag and give up. Embrace the love. I love the club and what it means to Lachlan."

"Dad supports the Tigers. The Dragons, I just don't like the players."

When asked about the household derby days when the Dragons and Tigers meet, opinion was split.

Whereas Lachlan admitted he "loved them!", Courtney was the exact opposite.

"I hate them. They're so hard. I want my team to win but when they do, Lachie's team loses. I obviously go to more Tigers games thanks to Lachie. You get to know the players and want them to do well. For Lachie, it's the first game circled on the draw. I'd be happy if there was only one every season." 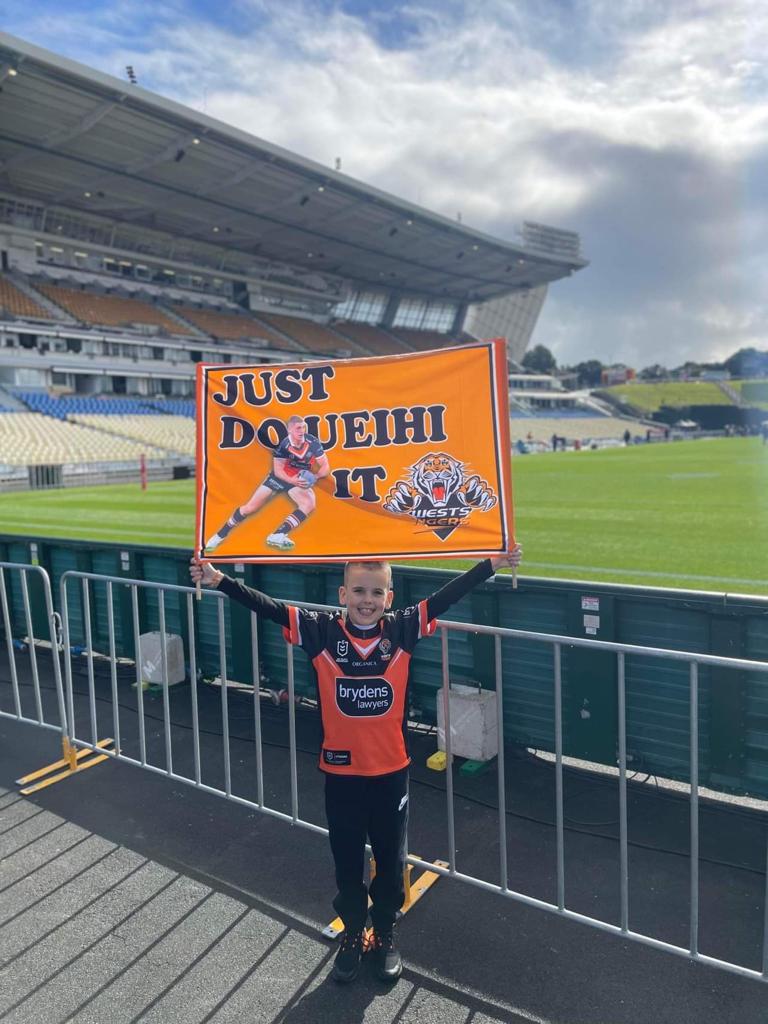 Although Lachlan loves all of his Tigers, one stands head and shoulders above the rest as his favourite; "Adam Doueihi. He's my favourite player."

Those who keep a keen eye on the Tigers games would probably have seen the youngster proudly displaying his "Just Doueihi It" banner. It's unmissable.

The family are yet to miss a Tigers game in 2022 with tickets booked for Tamworth this weekend. Lachlan, whose dream is to one day play for the club he supports was posed a hypothetical re this week's opponents.

Not the result we were hoping for this afternoon.
Thanks to Organica & @WestsTigers Lachlan got to watch the warm up from the sideline. He was shocked to see Jacko, only a few days after his surgery! Talk about commitment to the team
Onto Tamworth next weekend. #ShowYourStripes pic.twitter.com/1Q3meYGkHe

When asked whether he would consider a big money offer from the Sharks he laughed and issued a straight "No."

Perhaps the most famous, or infamous, game attended by the youngster was the Cowboys clash less than a month ago.

I, a fan of this game for over 30 years, struggled to comprehend the decision that allowed the Cowboys to snatch victory after the siren. Lachlan had the words I couldn't find.

Courtney admitted that the tears flowed as her little fan was righty devastated, however, he refused to leave the stands until every Tiger left the field, clapping every player as they walked into the sheds - something he does weekly. 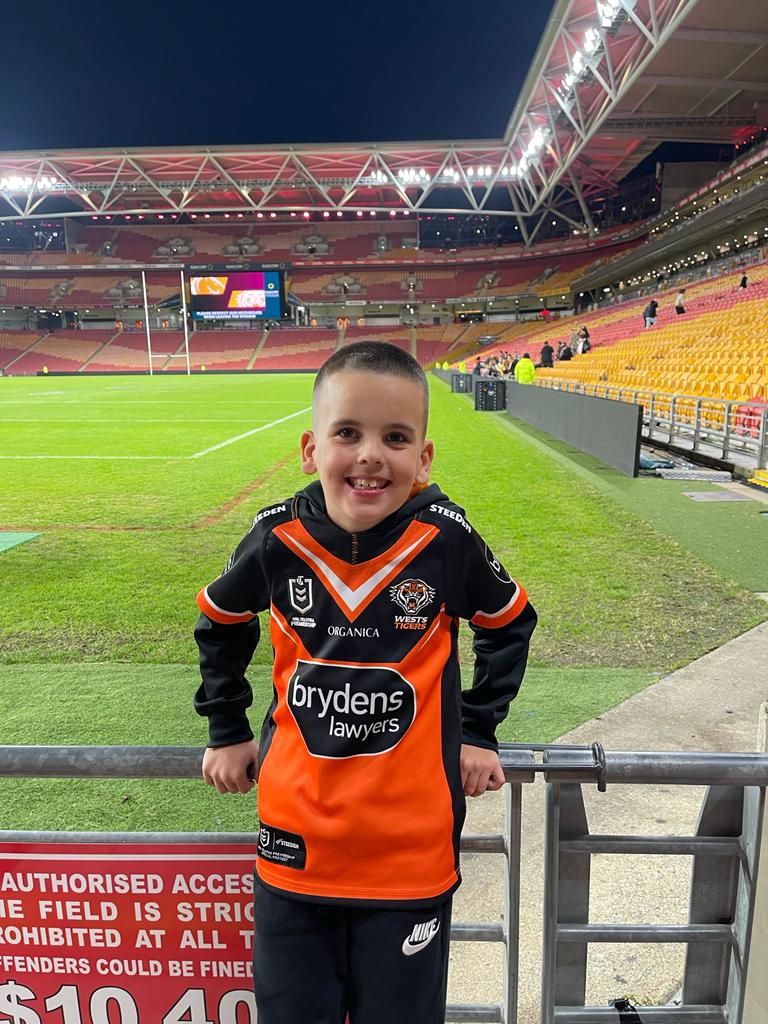 If all goes to plan, the Tigers' number one fan be at every game this season

"Adam (Doueihi) came over to check on Lachlan. He gave him a footy. Lachlan waited at the tunnel where the bus left. He wanted to wave at the players. Everyone came out. Jacko (Hastings) had a good chat" recalled Courtney.

"There were fans from country Queensland at the game who had never seen the players. They all came over despite the loss.

"You cannot fault the team. They're amazing. It doesn't matter the result or what happened on field, the players always make an effort to have a chat and take photos. Not just with Lachlan but with all the fans. They get canned a lot in media, unfairly. People don't understand behind the scenes. They're building something special."

"For Lachlan's birthday, Jackson Hastings actually reached out. He invited Lachie to training. I took him to Concord the next day and the boys surprised him. All the players are incredible but they're led by Adam and Jacko." 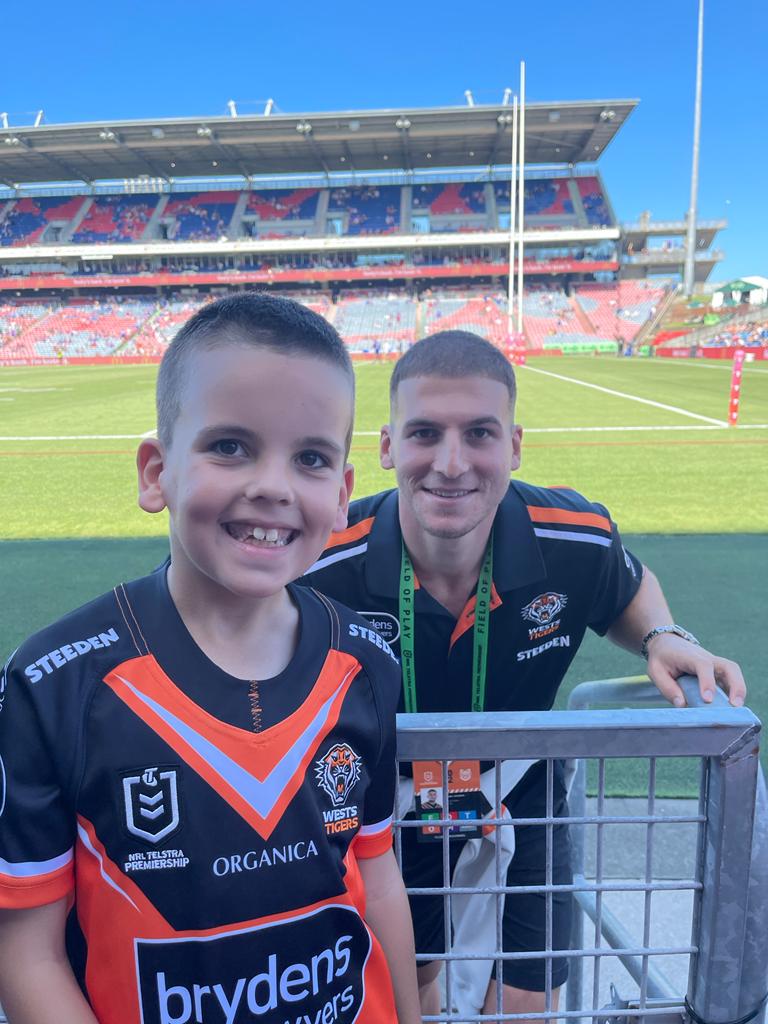 A star on and off the field; Adam Doueihi always makes time for his biggest fan

The other big game they travelled to was the return to Auckland game for the Warriors. The opponents were of course the Tigers, whose fans were understandably outnumbered.

When asked about the Warriors-dominated atmosphere, Courtney replied: "There were a few others fans, mainly family of the players. We were the only two sitting around Warriors fans. It was one of the best away games we've been to."

Lachlan details his experiences at these games, and the others, via a Vlog monitored by his mother. The little dude knows his footy.

Lachlan says his favourite game this year was "Definitely Easter Sunday" but of course his favourite all-time game was the grand final win. "He's watched it 40 times" laughed Courtney.

Although that win will likely always be his favourite, Lachie is very excited about the future following the announcement of Benji's future coaching plan.

"Benji will go well. I feel good about it. He'll bring exciting footy back. Api (Koroisau) coming next season will bring good service out of dummy half," he said.