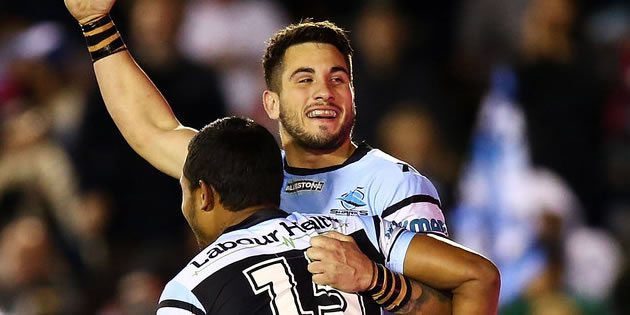 Fox Sports recently released a poll to gauge the opinion of rugby league fans on just who they believe will be the NRL rookie of the year for 2015.

Although there is plenty of talent on show, I believe there is only one choice when it comes to awarding the honour.

To use a MASSIVELY over-quoted line from a certain cartoon show, the Bird is the word.

No one player has turned their club’s season around like the Sharks number six.

Prior to his selection in the side, the Sharks had gone zero and four, and fans were wondering if they were going to produce enough wins to avoid a second straight wooden spoon.

Ben Barba was massively misfiring after being played out of position, and Jeff Robson looked as though he would have to play a lone hand in the halves.

Step forward 20 year-old Jack Bird, whose performance in his first starting performance saw him lead his side to a drought breaking victory over the Roosters.

Bird, who had played the majority of his junior footy in either the backrow or in the centres, seamlessly slotted into the trouble position for the Shire club, and neither he nor the Sharks has looked back.

To date he has scored six tries in his 14 NRL games, 13 of which have been played in the halves. His first game was an exciting burst off the bench that proved to be a preview of things to come.

Although he will shift to his preferred position at centre next season after the Sharks recruited both James Maloney and Chad Townsend, he has a very important role to play in the Sharks playing finals footy this season.

The Eels have finally officially released their enigmatic number seven to take up a contract offer from Warrington in the English Super League.

Sandow’s signing was supposed to kick start the Eels return to regular finals footy on the back of some incredible performances whilst he was at the Rabbits.

Unfortunately Sandow never lived up to expectations and may go down as one of the worst big-money signings in recent league.

It’s a real shame as no one can deny Sandow’s ability and entertainment value.

2015 will be remembered more for his off-field antics rather than his occasional heroics on-field.

An absolute shame, but his moving on is the best for all involved. I genuinely hope he re-finds his form in England.

Let’s be honest here. If he can’t fire in England, and in a big way, his NRL days are officially done.

If they aren’t already.

Toovey truly on the outer at Manly

Reports have come out that Geoff Toovey would be disappointed if reports of a mass clean-out at Brookvale are accurate.

As the coach of the side, shouldn’t he be VERY aware of any such plans?

Unless it is a media smokescreen, and to be honest I can’t see any reason for such, it is just further proof that Toovey is all but moving on at season’s end.

Toovey should be the man making these sorts of decisions, and certainly shouldn’t be kept out of the loop, which is his comments are to be believed, he certainly is.

This coming off comments he was unsure of the future plans of Cherry-Evans and Foran earlier in the season.

Once again, surely, as coach, he would be leading negotiations and would be in the know.

Reports indicate Trent Barrett is set to take over, but nothing has been confirmed. If Toovey keeps being made to look like he is not being involved in talks over player futures, we might not need confirmation.

Talk of an all QLD GF a little premature

Right now the Broncos and Cowboys are the undoubted form sides of the competition, however reports north of the border about an all-QLD grand final seem a little premature.

The Roosters seem to be finding form at the right end of the season, and recently blasted the in-form Warriors off the park.

You’d be silly to discount the premiers in South Sydney out just yet. They’re sitting in the top four, and to be honest haven’t played their best footy yet.

The Warriors are almost unbeatable on their day.

The Bulldogs have the players to worry any side.

Then there’s the Storm. Despite Billy Slater’s absence, they don’t look as though they’re going away any time soon.

I’m willing to say that one of either the Broncos or Cowboys will be there, and if I had to put money on it, I’d say we’re in for a Cowboys/Broncos vs Roosters decider.