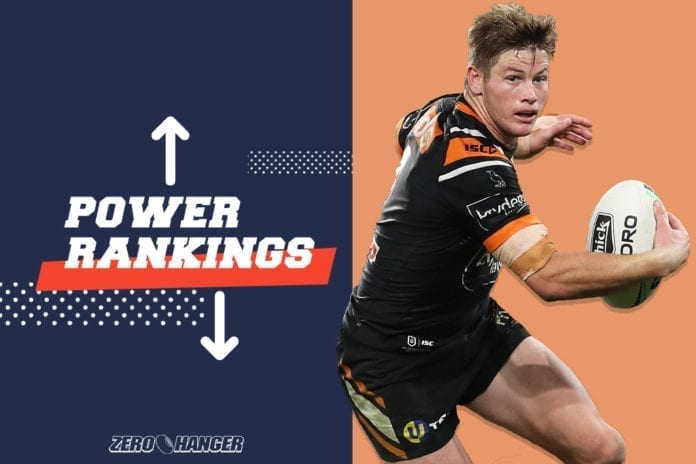 The Roosters completed their fifth straight win since the re-start but it may have come at a big cost having lost both Sam Verrills and Victor Radley for the season. To win 26-12 minus Tedesco, and having lost Radley in the opening minutes and Verrills before halftime just shows how dominant this club truly are. Joseph Manu was absolutely incredible filling in at fullback making over 310 metres and putting on one of the most impressive try assists of the season. The Chooks are now just one win off the top of the table after an 0-2 start. Incredible.

The Eels continue their incredible 2020 with a golden point victory over the Raiders. An 87th minute Clint Gutherson field goal clinched the two competition points despite an injury to Mitch Moses. The Eels almost snatched a loss from the jaws of victory in the final moments but were good enough to finish this game off. Ryan Matterson continues to announce himself as the signing of the season. Reagan Campbell-Gillard had his best game of the season by a long way. He was a monster. Rylan Brown and Reed Mahoney are years ahead of their experience.

What a win. The Storm put the resurgent Warriors away to the tone of 44 points on Friday evening. They may not have a home ground right now but it mattered not as the Storm ran in nine tries to one. Suliasi Vunivalu scored a hatty and rocketed up the try scoring list. Ryan Papenhuyzen and Paul Momirovski both scored doubles, the latter making a big mark on his temporary club. Unfortunately they lost Cam Munster in the process however Cam Smith will probably shift to seven with Brandon Smith at nine. Hardly a bad outcome.

Penrith could very well be a top this list if not for some incredible form by the above teams. They’re on fire after yet another brilliant win over the Rabbits. Brent Naden looked very impressive upon his return to first grade. James Fisher-Harris may be my new favourite forward. 248 more metres for the monster middle man continues his incredible 2020 season. Dylan Edwards has made a big impact since his return. Nathan Cleary is in the driving seat when it comes to Origin.

Newcastle fell to their most disappointing loss of the season copping 26 unanswered points in the first half. They did win the second half 20-12 but it hardly mattered after their awful first half ‘effort’. Kurt Mann is having a career best year in the number six. Ponga was kept largely quiet. Klemmer and Saifiti put up a big effort but the Knights forwards lost the battle. This was never a contest after the early points leaked but they fought back to their credit.

The Tigers managed to wiggle themselves into the top 8 after a dominant win over the Bulldogs. Harry Grant was again the star behind a dominant forward pack with the outside backs adding the class. David Nofualuma is having a career best year and cannot stop scoring tries. Adam Doueihi’s move to fullback has completely changed the outlook of this side for the better. Tommy Talau has secured his position on the wing for the future. All the Tigers forwards were strong here with Aloiai leading the way.

Canberra almost won a game they had no right to win, only to lose in the 87th minute. Truthfully they were lucky after scoring a try through one of the most obvious forward passes in NRL history. Josh Papalii is a top three prop right now, no one can convince me otherwise. Charnze Nicoll-Klokstad scored two tries in two minutes in the 75th and 76th minute and ensured a brilliant finish. Two straight losses have the fans a little worried on social media. Curtis Scott was a marquee signing but has been hugely disappointing.

Manly started their post Tommy Turbo era with a disappointing effort to say the least. Fonua Blake aside, they lost every personal battle with a side they simply don’t lose to. They copped 40 points to the recently struggling Sharks and only two late, weak tries, made this game anything even close to respectable. They’re down some troops but still have incredible talent. This wasn’t good enough. AFB will secure two Dally M points in a losing side.

The Cowboys bounced back from an awful first half effort last year with a massive, MASSIVE turn around. The 26-0 lead at half time came about via some brilliant football. They kept Ponga quiet by kicking away from him all game, often sending the ball over the touchline. Jason Taumalolo had another almost-300 metres game. Kyle Feldt is borderline unstoppable right now. Clifford and Robson both looked great in attack. Tom Opacic had a huge influence with two try assists upon his return.

This was the Sharks best performance of the season, by a long way. They ran in 40 points against a traditional bogey side in supreme fashion. Truthfully they turned off late and let in two weak tries but otherwise dominated for 65+ minutes. Morris has worked out his bench rotation in stacking it with absolute monsters. Talakai looked incredible while Fifita had looked five years younger from the bench. Townsend had his best game since 2016 while Johnson is a try assist machine right now. Moylan’s ball to put Ramien over untouched oozed class.

The Bunnies continue their up and down season after a 20-12 loss to the Panthers. Truthfully they had their moments here but a late try probably put them closer than they deserved to finish. I did not like the James Roberts bench use at all. His came on, gave away a penalty and sat in the sin bin. If he doesn’t start, he shouldn’t be there. Alex Johnston was a force out wide. There are huge mixed reviews on Damien Cook’s 2020. I have to admit I expected more. I like the look of Bayley Sironen.

The Dragons were brave on Friday night but fell well short of the Roosters despite some everything falling in their favour. Matt Dufty continues his resurgence and looks the Dragons best attacking player. Lomax is a genius footballer and has looked at home back in the centres. Mikaele Ravalawa is either brilliant or dour. It must be super frustrating for fans wearing the Red V. He topped the metres made for his team and scored a try this week in a much improved performance. Saab failed to fire on his return. Surely Tristan Slater is close to a return.

The Titans recorded their third straight victory over Brisbane at Suncorp with a 30-12 win on Saturday. The Titans were much better in every aspect across 80 minutes. Anthony Don topped the metres made list in scoring a double. Ash Taylor was very good here. Jamal Fogerty has made a big difference and surely has to retain his spot even when all the troops return. Peachey and Proctor must have read my entry last week as both had season best games by a long way. Great win.

The Warriors failed to rebound after last week’s big loss after conceding 50 points to the Storm. Truthfully RTS should have had three try assists if not for errors as his teammates looked to cross the line. RTS ran for almost 300 metres and ran himself ragged. He looked frustrated. Outside of RTS there was very little to commend here. Tohu Harris ran hard and Ken Maumalolo was a giant, but this was a poor performance all around. I’m not sure sacking the coach was a smart option considering the circumstances.

Every week is the same for the Dogs. Brave but outclassed. Copy and paste here. They were behind the eight ball early on when Will Hopoate limped off without being able to return. Foran showed glimpses of class, Adam Elliott was excellent in parts etc etc etc. I bet I can literally copy this entry next week. They need Luke Thompson to have a Thurston-like influence on the side to save their season. He’s a brilliant addition but I can’t see that happening.

This is officially rock bottom for the Broncos. With the greatest of respects to the Titans, for the Broncs to drop a 30-12 result to a side in a rebuilding stage, delivering their fifth straight loss, says where they’re really at. It is not good. All the talk is around the coach however there are probably eight players who deserve to be sat in QLD Cup this weekend. This was dire. They were never in this game. Tesi Nu had a less than stellar game after much hype, while Seibold’s use of the bench was staggering. They finished the game with 11 players in comical circumstances.