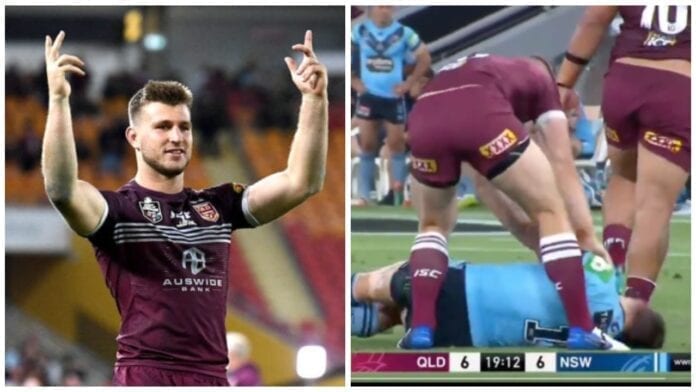 Queensland lock Jai Arrow has lifted the lid on the numerous death threats he and his family received following an altercation with Blues superstar James Tedesco during last year’s State of Origin Series.

During the series decider, Arrow roughed up the Roosters fullback, who was unconscious at the time, with the new Rabbitohs recruit previously stating he isn’t a grubby player and had no knowledge of Tedesco’s condition.

Tedesco was unable to return to the field following the incident, with Queensland going on to clinch the series with a 20-14 victory at Suncorp Stadium.

Speaking to SEN 1170, Arrow revealed both he and his family have received threats online, including distressing messages to his young nephew.

“Yeah it was pretty bad to be honest,” Arrow said.

“I had some messages on social media that I probably can’t even repeat on radio. One of them was someone saying if I see you in the street I’ll hit you with a bus. Just stuff like that which was pretty weird.

“But I was very remorseful about the incident and not proud of what I did. I didn’t know he was unconscious.

“The incident all happened very quickly and I’ve apologised to James many times so I hope he forgives me.”