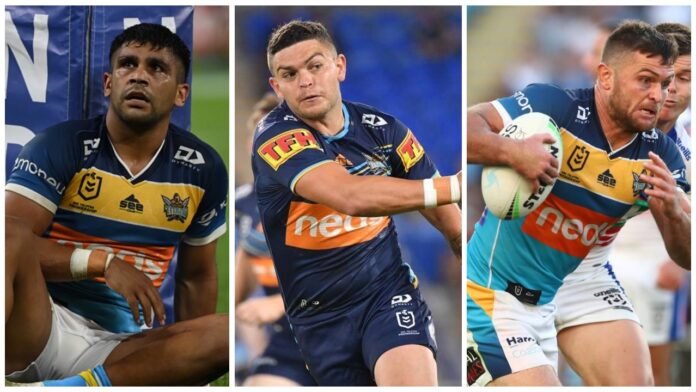 Out-of-contract Titans Tyrone Peachey, Ash Taylor and Mitch Rein are still waiting for their futures with the club to be decided ahead of their side's premiership push.

Although the expansion side is gearing up for an elimination final with Sydney on Saturday afternoon, The Daily Telegraph has reported that the trio are likely to know their fates ahead of the contest, with a decision on their respective retentions set for Wednesday.

With Peachey elevating his output upon a return to the six jersey during the Titans' 44-0 win of the Warriors last Sunday, it would appear that the 30-year-old has effectively stamped Taylor's exit papers.

The ex-Sharks and Panthers playmaker explained that a return to the halves was a far cry from his previously role of bit-player on limited minutes.
“It’s been enjoyable, before that I wasn’t playing too much and coming off the bench,” Peachey said.

“The coach had confidence in me to put me at five-eighth and I’ve been trying to play my best footy going into the finals."

Having played a hand in many of the Coaster's thrusts towards the line in their whitewash over the Kiwi franchise, Peachey believed he could continue his run of form should an extension present itself.

“I’d love to think that [I could play five-eighth next year]. I’m trying to put my best foot forward in these last couple of games," he said.

“There’s no real six solidified for next year. If they do keep me and go with that, I’m all for it."

Although nothing is set in stone, if Holbrook and the Titans' brass decide to part company with Peachey, he has a message for rival clubs eyeing off his services - don't write him off.

“I’m hoping to stay on the Gold Coast. They’ve got a meeting on Wednesday to decide if they’re going to keep me or not," he expounded.

“If not, I want to go to a competitive team. I’ve got plenty left in me.

“It [the situation] is totally understandable. There’s a salary cap they’ve got to worry about and a lot of people they had to get sorted first.

“I know where I stand and what I’m worth. We’ve just both got to agree to what we want.

“Hopefully they keep me. I want to stay.”

Taylor, 26, is in the final season of his rich deal with the sunshine coast side, but after only lacing the boots on 16-occasions this season, it appears that his playing future lies away from Parkwood.

At 31, Rein's tenure with the Titans has also looked rocky at stages, after head coach Justin Holbrook demoted him in favour of Erin Clark throughout the year.
“When you’re in and out of the team it sucks," Rein said.

"That’s just what happens in a team environment. There’s always people pushing for a spot.

“Those games where I wasn’t in, the coach didn’t think I was the best man for the job, that’s the way it is."

Still, after crossing the chalk during his side's September securing win last weekend, the veteran dummy-half did his chances of an extension no harm.

Although the former Dragon has yet to hear anything formal from the club, Rein had his fingers crossed he could continue into a fifth season clad in a blue, yellow and white jersey.
“It’s kind of there in the back of your mind but I’ve been in this position a couple of times,” he said.

“That’s just how footy is. You learn to deal with it. I’m still enjoying it and loving it. Hopefully I can land a contract soon or figure something out.

“It’s out of my control. I’ve just been having that approach for most of the year. The only thing I can control is how I’m playing and I’m doing the best I can there."

Despite the ambiguity surrounding his situation, the formerly top-knotted rake claimed he was focused on the task ahead of him this weekend.

“I’ve still been training hard and doing everything I can. I’m going into the finals really keen. I’m going to make the most of it," Rein revealed.

“Hopefully something will work out and my manager George [Mimis] can come to me with some positive news.”