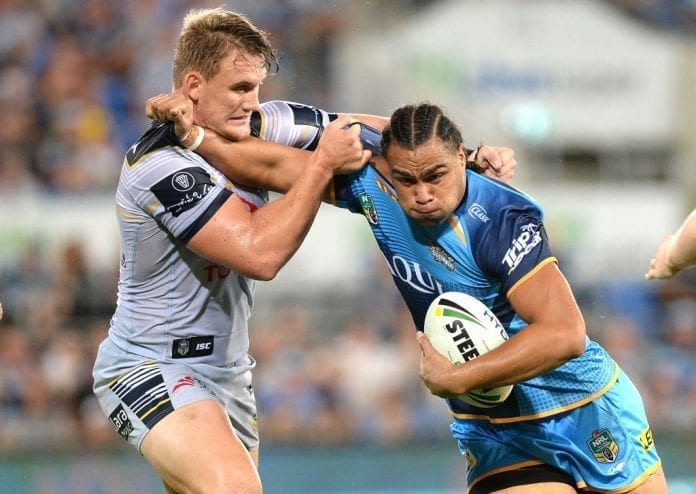 Warriors front-rower James Gavet has had his contract extended to the end of 2019 while New Zealander Leivaha Pulu will move to Mount Smart Stadium from the Gold Coast Titans on a three-year contract next season.

Both aged 27, the two big forwards have also been late developers at first-grade level.

Gavet has played 18 of his 32 career games with the Vodafone Warriors since the start of 2016 and Pulu started his 34-game NRL career in round one last year.

“They both bring size and plenty of enthusiasm and aggression in the way they play the game,” said Vodafone Warriors recruitment and development manager Tony Iro.

“James was in our NYC and NRL squads in 2009 and 2010 and always had potential. It has taken him time to get to this level but he has had a really impressive season since coming back into our first-grade side in round four.

“We’ve been interested in Leivaha for a while. He has worked hard for his opportunity in the NRL and has made a real impact since joining the Titans.”

Gavet – 1.89m and 108kg – followed his only NYC campaign in 2009 with a year in the Vodafone Warriors’ NRL squad in 2010, playing for the now-defunct Auckland Vulcans in the New South Wales Cup (now the Intrust Super Premiership) without breaking into the NRL side.

Moving to Sydney he went on to earn his NRL debut in his only first-grade appearance for Canterbury-Bankstown in 2012 before stints with Wests Tigers and Brisbane.

When he returned home to Auckland last season, the Kelston Boys’ High School fought through the offseason to gain a contract, playing his maiden NRL game for the Vodafone Warriors against his old Tigers side in round one.

A Marist Saints junior, he made 35 NYC appearances for Wests Tigers in 2009 and 2010 before having links with NSW Cup sides Western Suburbs, Windsor Wolves and Wyong Roos as well as an offseason with Lezignan Sangliers in France.

Pulu was picked up by the Titans on a one-season deal for 2016 and finished up playing in 23 of the club’s 25 games. He has been ever-present for Gold Coast this year and also made his Test debut for Mate Ma’a Tonga in its win against Fiji earlier this month.

Iro said the Vodafone Warriors would be making more recruitment announcements in the coming weeks.