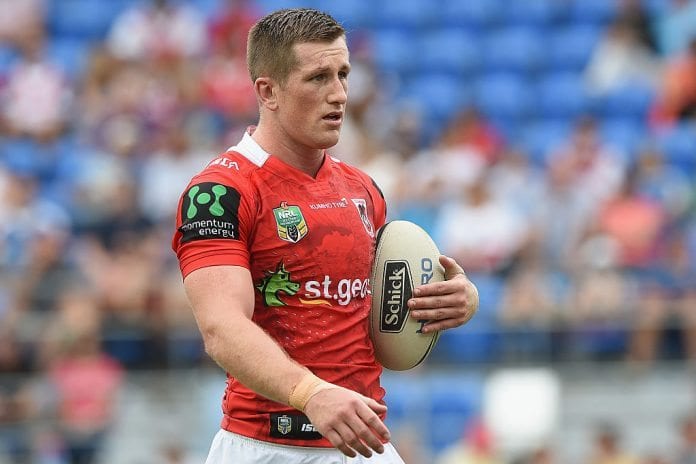 Pre-season tragedy struck for the Dragons during the week as the man most likely to replace the outgoing Benji Marshall as Gareth Widdop’s halves partner in 2016, Drew Hutchinson, suffered a severe injury and will now miss the 2017 season.

Unfortunately for those fans of the Red V who welcomed the links of the troubled yet extremely talented duo to the club, just as quickly as the reports of a possible link was suggested, as to came the denials from club officials of any interest in either of the pair.

Dragons officials said they would not be considering anyone outside the current squad to fill the halves position that the injury to Hutchinson has opened up.

Former Raider Josh McCrone looks the most likely to step in, and will without a doubt put forward his very best effort. He is far from the worst half to play NRL football, yet with all due respect, hasn’t set the game on fire over the past few seasons.

This opportunity may be what he needs to again kick-start a career that looked incredibly promising at times while plying his trade in the nation’s capital.

I admire the Dragon’s stance in that they don’t want to disrupt a side that is settled, especially bringing in a player with the colourful past of a Todd Carney or Chris Sandow, but given the lack of points scored by the Dragons in 2016, perhaps a high stakes punt on either is the club’s best option.

Dragon’s fans are all too aware of how much was said and written about their side’s attacking woes in 2016. They scored only 341 points across the entire season.

To put that into perspective, the Knights managed to score 305 points despite only capturing three competition points on their own merit.

Dugan and Nightingale (12 each) were the only players to post double-digit stats for line breaks.

In comparison, Bevan French for the Eels in the 13 games during his debut season scored 19 tries and broke the line 11 times.

The club has managed to sign Nene McDonald and Paul Vaughan for 2017. Vaughan will likely make a mass of metres and should create space for the likes of Widdop and co. while McDonald knows how to break the line and find the try line.

That being said, neither are in the Thurston or Maloney mould, in that their arrival will spark an attacking revolution for their club.

Cameron McInnes has also joined the club with the Red V fans hoping he is able to provide a little more spark than the hard working Mitch Rein.

Any decision to recruit either Carney or Sandow would be seen as a situation of risk vs reward.

In Todd Carney the Dragons would be linking up with a player who is currently in a legal battle with his last NRL employer, the Sharks, and also faces a tough time being registered following a string of incidents.

His past few seasons have also been hampered by lingering injury issues. His signing would see the club plastered across the papers for days, with constant photos of Carney likely to pop up every time he even looks like leaving the house.

Despite the above, the Dragons would also be linking with one of the NRL’s most exciting attacking players, a former Dally M medallist and a player, who by all rights, should have a stack of representative jerseys to his name.

Carney’s time at the Roosters was one of the greatest comeback stories in recent NRL memory, while his stint at the Sharks, at least early on, saw him win over the hearts of thousands of fans in the Shire.

I do believe the NRL would re-register him eventually, and Carney has publicly stated he is happy to agree to whatever terms are asked of him both by a future club and the NRL.

Although it is possible that the court case with the Sharks could have ramifications of any future employment.

There would be plenty of risk in approaching Carney, but he would deliver a shot in the arm to the Dragons attack, of that there is no doubt.

In Sandow’s case, his exit from English Super League club Warrington was a messy one, with the halfback failing to report for pre-season training after deciding to stay in Australia for personal reasons.

Sandow was the first to admit the exit was not handled well, but the decision to move back home to be closer to family is certainly understandable.

He too has had off-field problems, but much like Carney, his presence would add spark to a floundering attack in need of an off-the-cuff style player.

Sandow has probably never fully lived up to his undoubted potential, which is a shame as when he is on his game he is one of the most exciting players in the code.

Despite their errors in the past, it would be a shame to think that the on-field talents of both Carney and Sandow could be lost to rugby league, but the hesitancy of clubs to offer these players deals is understandable.

That said, if the Dragons start their 2017 campaign struggling to post points, it’s likely we will see the names of Carney and Sandow once again floated.