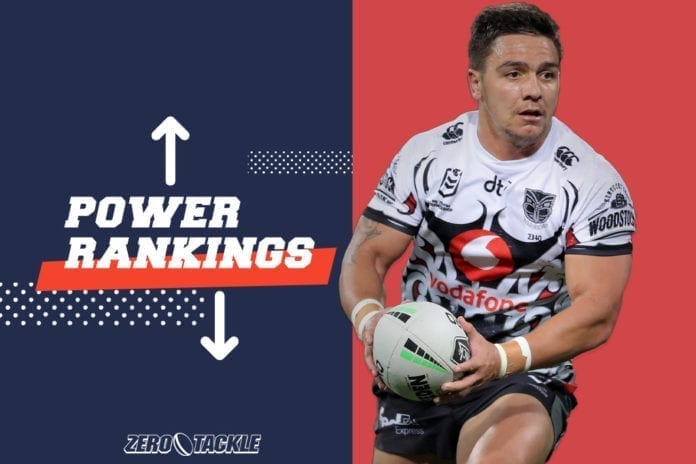 The red hot Storm wracked up a convincing win over the Knights but it may have come at a big price. Can Smith may miss an extended amount of action while Papenhuyzen looks to have also suffered an injury.

That said, the Storm took full advantage of their seven line breaks, running in four tries to three on the Sunshine Coast. Pretty standard performance from Melbourne who just did the little things better. They’re second on the ladder but shape as the team to beat.

Penrith are absolutely flying after 12 rounds after yet another win, this time to the sound of 42-12 over Manly. The table topping Panthers ran riot over a fancied opponent, scoring seven tries.

The Panthers outside backs are borderline unstoppable right now. Naden had a field day while Staines scored a highlight reel try to add to his early career tally. Cleary is on another level right now.

The fact that the Eels squad weren’t sure re whether or not to sing the team song after this game says it all. Ultimately, they captured the competition points and not much else.

18-0 up this looked Parra by how many. Despite the disrespect shown for the Dogs re the post game antics, I suppose this was job done. Moses was good, King Gutho started well and the Eels middles were gigantic, but this was a pretty ordinary effort. Huge game this weekend against the Sharks.

Truthfully, the Roosters are winning despite being ordinary lately, and it’s cost their young halfback his position this weekend. The 18-12 point win came through a string of penalty goals and a one man advantage for 20 minutes.

Young Many scored a brilliant solo try and Mitch Aubusson enters a milestone game on the back of a try here. To say the Chooks miss their all representative second row is an understatement. No Morris brothers left a further huge void here also. A win.

The Green Machine are welcoming some serious cattle back and results are starting to flow. That said, a two point win over a severely under manned Cowboys outfit won’t have too many fans excited.

Curtis Scott found the line in a positive sign that he may be rediscovering his form. Rapana now looks right back at home in the 13 a side game. Tom Starling is proving to be a more than handy pick up.

A young and hungry Sharks side managed to continue the Broncos woes with a 10-point win on Friday night. A Jets heavy outfit got the job done on the back of solid debuts from both Ferris and Trindall.

Wade Graham was electric for the visitors while the Sharks young bench was again very, very good. Will Kennedy is every bit a first grader now while the Sharks wingers continue to impress. Talakai is making a late run for bargain signing of the season. Conor Tracey scored his first NRL try to cap off an incredible backline movement.

A late comeback, of sorts, saw the Knights finish a little closer than they perhaps deserved on Sunday afternoon. Pretty handily outplayed by the Storm yet brave in defeat probably best sums this up.

Pongas form since re-signing is starting to become a worry despite big metres. Bradman Best scored a brilliant try but may miss the rest of the season. Blake Green’s signing should provide some relief at nine after carnage in the Knight’s stocks. Need a win to arrest their recent form slide.

Manly should have fallen lower after their big loss to the Panthers if not for results around them. They were well and truly outclassed by a far better Penrith side.

Jake Trbojevic is a machine, and possibly the most likable player in the league. DCE did everything he could but was outpointed in an Origin preview halves battle. Onto next week for the Sea Eagles who are well below the elite teams right now.

I still cannot believe that the Bunnies walked away 32-24 winners on Thursday night. Down three tries and 16-0 after 17 minutes, this was game and possibly even season over given their halfback was taken off injured.

Step forward the Bunnies Indigenous Superstars. Walker, Johnston, Latrell, Gagai. Incredible! I can’t see why Johnston is being moved on next season. He’s an x-Factor they don’t otherwise have. Walker was incredible in reminding us all of his credentials.

The Tigers dropped yet another winnable game and now sit a win and points differential outside of the eight. Two early tries and a six point lead at halftime wasn’t enough.

The Tigers made 400 metres less than the visitors despite an 87% completion rate on 46% possession. Tigers fans were left frustrated on social media and truthfully I can’t blame them. They need to win these games.

15 minutes into this game I thought the Dragons had this parcelled up. Unfortunately, the Dragons began to play as though they felt the same.

Matt Dufty’s opening 20 minutes had to be seen to be believed. I don’t know what happened after the Bunnies first try but I’m sure Dragons fans and coaches alike will have lost plenty of sleep asking the same question.

The Warriors continue to provide more than just nuisance value after beating the Tigers on Friday evening. Peta Hiku scored a double, Nikorima kicked a perfect 5/5 from the tee and the newly arrived loan players were both very good.

The Titans dropped a six-point result to the back to back premiers despite being down to 12 men for 20 minutes. Not a bad result on paper, but they just didn’t threaten enough against an undermanned Roosters side.

Brimson was good on return, Don scored an incredible try, Brian Kelly ran for over 200 metres but it was all undone due to illdicipline. Two sin Bunnings, three penalty goals conceded and seven genuine penalties made it tough.

What was Aidan Tolman thinking!? I hate to single out players but two points down, late on, penalty right in front and he takes a hit up!? Yikes. Otherwise this was a pretty handy performance from the rapidly improving Bulldogs.

Down 18-0 to the Eels, it was hard to see anything other than a huge Parra win. The Dogs managed to push their fancied neighbours all the way but will rue some poor decisions. A far improved side over the last month.

The Cowboys can be really proud of their efforts in a two point loss to the Raiders, with a pretty handy half to return this weekend. Morgan’s return should spark a run of results although the run may have been left too late.

Taumalolo topped the metres again in another monster effort. Copy and paste. Now sitting in 13th, the Cowboys are now six points outside of the eight. Solid performances are good but they need wins. Hard to see where they come from right now.

The Broncos put in their best effort for seemingly going on months but fell short to the Sharks. Their final 15 minutes have been a huge issue this season and they were unable to stop a young Sharks side missing millions of dollars of talent.

Milford looked good while Darius Boyd, playing in his preferred position, had his best game in two years. Pangai Jr was an offload machine while Staggs ran riot out wide. 10 line breaks and plenty of attacking footy provided some good signs here despite the result.

Several new NRL rules to be trialled in final round