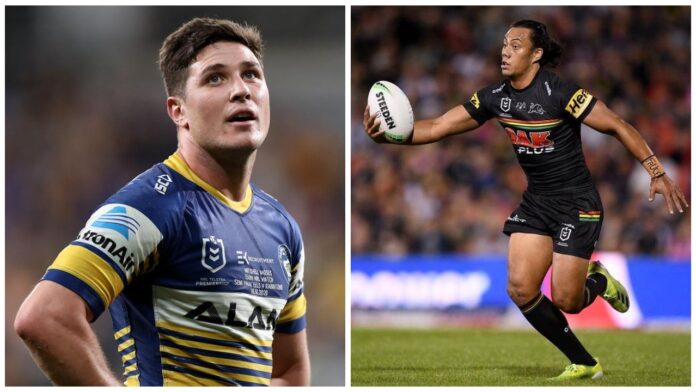 In a tight semi-final contest that was ultimately decided by a penalty on the stroke of half-time, any time the referee's whistle blew during Saturday's scoreless second-half was always going to have seismic ramifications.

However, it was the adjudicator's decision not to rattle the pea that saw the greatest alteration to the result of the 'Battle of the West'.

In the 68th-minute of the 8-6 arm wrestle in Mackay, Parramatta were denied what appeared to be an obvious penalty when Panthers playmaker Jarome Luai held Mitchell Moses back on an Eels' foray forward.

Watch Jarome Luai take Mitch Moses out. Guy gets away with this shot all the time. #NRLPanthersEels pic.twitter.com/HiYJgcSums

Although the ball ended short of Parra's try line and Penrith eventually reclaimed the ball, Luai's restriction of the ameliorated Moses was seen by many as not only worthy of reward, but should have also seen the Origin representative sent to the bin.

Add to the fact that Will Penisini was also obstructed in his attempts to collect Blake Ferguson's grubber at the end of the play and it was little wonder why Brad Arthur blew up in his post-match press conference.

“We make a linebreak out of the backfield and Will Penisini gets tackled off the ball and Mitchell Moses is running there to chase and he gets tackled in the background off the ball,” Arthur said of the incidents.

NRL head of elite competitions Graham Annesley confirmed a penalty should have been blown.

"This should have warranted a penalty," Annesley said.

"They jostle and there is the last grab from Luai that takes Moses off balance.

"I don't think it warrants anything more than a penalty."

Coach Arthur went on to also suggest that Penrith had earned the rub of the green from the officials across the entirety of the contest.

Some may claim the 47-year-old was suffering from a palate of sour grapes, but Fox League pundits Braith Anasta and Cooper Cronk agreed with Arthur's contention.

“That is clearly a penalty by a long way, if not a professional foul… This moment obviously was a big one... that is a clear penalty,” Anasta said in commentary.

Cronk doubled down by suggesting that Luai was lucky to stay on the park after the cynical act.

“That is a missed opportunity, a missed penalty from the referees and the bunker. That is, every day of the week, 10 minutes in the bin,” the Storm and Sydney premiership player commented.

Although earning plenty of praise across a two-season period that saw him make his Blues' debut earlier this year, Luai has recently been cited by viewers for similar acts, such as this trip against South Sydney earlier in the month.

@9_Moley @BuzzRothfield did anyone notice this play. Luai after passing throws leg out to trip defender from coming across to assist in cover defence. Missed by all officials pic.twitter.com/ppBFvDvMO7

Sadly for blue and gold barrackers, this isn't the first time a refereeing oversight has cost them in September.

However, I doubt the club will be filing an official request to have the contest replayed akin to the Eels' semi-final exit in 1978 after Manly scored on the seventh tackle.