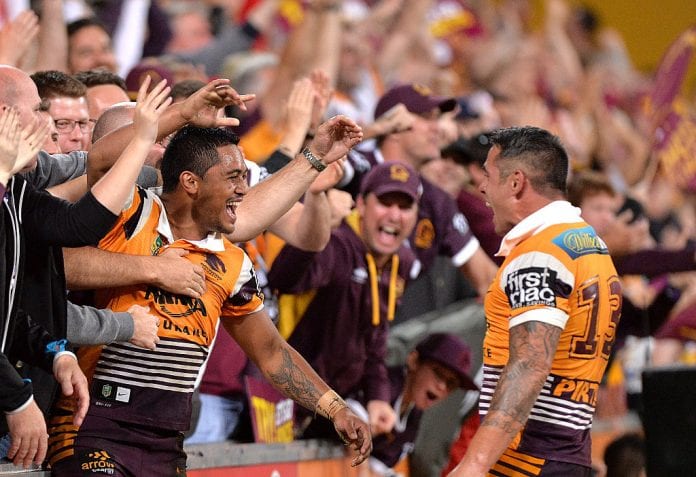 2015 was an outstanding season for everyone other than my 2015 predictions. I was able to predict three of the top four, the Dally M, as well as a few others, however 2016 is a new season.

The below are simple predictions and aren’t meant to put down a team of their fans. Only one team can win it, one team has to finish last.

Below are ten predictions for the 2016 season. Some are more outrageous than others. We’d love to hear who you think will capture the title, Dally M, wooden spoon and top scorer in the comments.

This is hardly a left-field prediction as a good majority of the media have the Broncos winning the title next year, whilst the betting agencies have them as solid favourites. For 79 minutes of last year’s decider I thought the Broncos had it wrapped up. They’ve got arguably the most talented roster across the park as well as a coach who knows how to win titles. James Roberts is the final piece of the puzzle and fills the only perceived possible weakness after the retirement of Justin Hodges. Unless they suffer a huge injury toll, I can’t see how the Broncos won’t be there or there abouts.

2. Broncos, Cowboys, Manly, Sharks to make up the top four

The Broncos and Cowboys are obvious choices as both have almost identical sides to that of their successful 2015. The Sea Eagles and Sharks ran two of the three best recruitment drives (with the Warriors being the third) and now have sides to worry anyone on any given day. The Roosters and Bulldogs loom as the biggest threats to trouble this, but the two beach-based Sydney sides are my picks. Manly have fixed their weakness in the forwards while the Sharks have signed two creative halves to guide their amazing young outside backs and forward pack.

Last year I tipped the Dragons to “win” the spoon, so Titans fans can prepare for September action if my streak continues. Unfortunately I just can’t see the Titans having anywhere near the strike power to worry any of the top sides. They have lost too much in Roberts and Sezer and haven’t added a whole lot. They do have one of the best young halves in the game in Kane Elgey but the Titans haven’t provided him with too many strike weapons out wide. The Tigers seem the most likely to “challenge” for the spoon but the Titans look morals right now. Hopefully they can pick up some players before the season starts.

4. Bunnies to miss the eight regardless of Burgess return

Sam Burgess returning to the Bunnies should provide a big plus for the 2014 Premiers but they simply don’t have the cattle they did two years ago. Dylan Walker is a huge out despite an inconsistent 2015 season, while Chris McQueen and Glenn Stewart leave a big gap in the second row. With Tom Burgess seemingly set on perusing an NFL dream and Tim Grant potentially heading to the Tigers, the Bunnies look light up front. They really struggled out wide and haven’t signed readymade replacements. They’ll be far from easybeats in 2016 but I can’t see them matching the top eight or nine sides.

5. Semi, Holmes and Roberts to battle for top try scorer

I’m hedging my bets here but I believe this season’s top scorer will come from the three listed above. Semi Radradra is a try-scoring machine and will be even more dangerous with Kieran Foran in the side. James Roberts scored 18 tries in a below par Titans side so realistically could score over 20 with better service. Valentine Holmes was the Sharks top scorer by a mile and has James Maloney and Chad Townsend distributing the ball. Rona, Croker, Vatuvei and co will score plenty of tries but it’s the Eels, Broncos and Sharks flyers I expect to place top three. If I had to put money on it … Holmes.

6. NSW changing of the guard

After a shocking performance in Origin three, it is time for NSW to ring the changes. I’d be surprised if Pearce and Hodkinson were the halves pairing for this year’s series. James Tedesco, Blake Austin, James Roberts and Bryce Cartwright are all players I’d like to see involved at some stage, while Wade Graham and Paul Vaughan will be in the selection talk. Despite Laurie Daley’s ridiculous policy of assuring players of their spots before the season has even kicked off, I believe his advisors will show him the light and pick in form players. Tedesco, if he can continue his 2015 form, should be the first player picked.

This has been a busty off-season with plenty of player movement. Incredibly the player merry-go-round shows no signs of slowing down as Dale Copley, James Gavet and Lloyd Perrett are reported to be looking for clubs for 2016. Contracts mean very little these days. Players can sign long-term deals yet find themselves as a different club just months later. It’s a sad state when a player who has a contract for 2016 and beyond is already in talks with other clubs. Cooper Cronk has been linked with the Dragons recently. Although there may or may not be any truth to this, the fact these rumours continue to fly frustrate fans of both sides. Players and teams should think harder before signing/offering contracts.

I have tipped the Titans to win the spoon based on the shallowness of their squad. Graham Annesley and co will be absolutely hell bent on ensuring the Gold Coast club doesn’t have to endure too much time without success. There are a huge crop of players coming off contract at the end of 2016, and I expect the Titans to aggressively target star talent. Klemmer, Lane, Bird, Buhrer, Koroibete, Sims, Mansour, Keary and Moa are all off contract and all realistic targets for the Titans. A few big name signings can totally turn around a side’s fortunes and quickly.

9. Referee bunker to help but not solve video refereeing howlers

The video referee bunker is a good idea and should see some level of consistency in rulings, however it is not fool proof. The NFL have used this system and players, fans and coaches are still often aggrieved by decisions. The rules need to be clear cut on what is “sufficient evidence to overturn” an on-field guess. There are always going to be refereeing errors, its human nature. The introduction of the bunker is a step in the right direction, but as long as the flimsy evidence rules remain, there will be howlers.

10. Coaches under fire: McFadden and Taylor in sack race

Andrew McFadden has a side capable of winning a premiership after a brilliant recruitment drive. If the Warriors do not start well, and let’s face it, who knows which Warriors side we will see week to week, McFadden will pay the price. Ivan Cleary has been linked with a return to the club after his release from the Panthers. These days coaches shoulder too much blame for bad performances as it is far easier to replace a coach than a group of underperforming players on big contracts. There is plenty of pressure on plenty of coaches before a ball is even kicked or passed in 2016. I hate to be negative but I can’t see how Jason Taylor can remain at the Tigers, while McFadden and Neil Henry may not be there at the end of 2016.